A drive-by shooting in Norfolk, Virginia, was streamed on Facebook Live by one of the victims. You can watch the video of the shooting above.

TJ Williams was recording the video Tuesday night when someone opened fire on the car he was in with two other men. All three men were shot and were taken to the hospital with “significant injuries,” Norfolk Police said in a press release.

“During the shooting incident, one of the men inside the car was broadcasting a live video to Facebook,” Norfolk Police said. “This video has been confirmed to be of the actual shooting incident.”

Two of the men are 27 and one is 29. Police said the men were “doing better” Wednesday, but one of the victims remained in critical condition.

No arrests have been made. Detectives do not have a description of the suspects.

The shooting happened about 6:10 p.m. near the 900 block of Bainbridge Boulevard, police said.

In the video, the three men can be seen listening to, and singing along with music. About five minutes into the video, gunfire is heard and the phone drops to the floor of the car. Several shots are fired. A man can then be heard saying, “call an ambulance, please.”

Emergency responders can be heard about 10 minutes later. The video continues streaming for more than an hour after the shooting.

The shooting is the latest to be captured on Facebook Live. In late March, 31-year-old man was shot multiple times in Chicago while streaming live video on Facebook.

On June 15, another Chicago man, 28-year-old Antonio Perkins livestreamed his death on Facebook. The video showed him talking to the camera before he was shot multiple times.

And most recently, Diamond “Lavish” Reynolds used Facebook Live to stream the aftermath of the police shooting of her boyfriend, Philando Castile, in Falcon Heights, Minnesota. The graphic video didn’t show the shooting, but show a bleeding Castile in the driver’s seat of his car.

The video remains on Williams’ page and has been viewed there more than 160,000 times.

“One of the most sensitive situations involves people sharing violent or graphic images of events taking place in the real world. In those situations, context and degree are everything,” Facebook said in a statement. “For instance, if a person witnessed a shooting, and used Facebook Live to raise awareness or find the shooter, we would allow it. However, if someone shared the same video to mock the victim or celebrate the shooting, we would remove the video.” 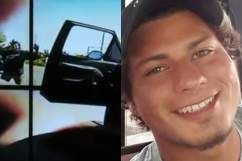