On Tuesday, FBI Director James Comey announced that the FBI would not be recommending any charges be filed against Hillary Clinton related to her use of emails on a private server or the accidental leaking of classified information. But he was also quick to add, in his statement: "To be clear, this is not to suggest that in similar circumstances, a person who engaged in this activity would face no consequences. To the contrary, those individuals are often subject to security or administrative sanctions. But that is not what we are deciding now."

In fact, people have been charged or faced discipline when negligently handling classified information in the past. Heavy discussed one example with David Petraeus and why he was charged in a story here. But there are more examples that are even more similar to Clinton's. Click through the gallery to see a few stories of other officials who faced more severe consequences than Clinton for being negligent with classified information. Do you think the stories are similar enough to indicate a double standard? Let us know in the comments. (Getty) 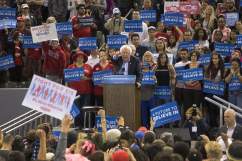 Read More
Breaking News, Hillary Clinton
The FBI recommended not indicting Clinton for her emails. See others who were similarly negligent with classified information and paid a high price.