The 18-year-old unarmed and fleeing teenager shot in the back by Chicago police after fleeing from a stolen Jaguar was a high school graduate who dreamed of boxing or becoming a chef.

Chicago’s Independent Police Review Authority released videos of the shooting on Aug. 5 after the family had a chance to see them. See them here. The IPRA head called the videos shocking and disturbing, The Chicago Tribune said.

Police did not find a gun at the scene, said The Associated Press. ABC 7 said that police say O’Neal was “unarmed” and in a stolen Jaguar that was fleeing the scene when he was shot. However, the videos show he was shot after fleeing the car on foot. The Cook County Medical Examiner’s office said that O’Neal was shot in the back, The Chicago Tribune reported.

The Chicago Sun Times said initially that O’Neal was “shot to death by Chicago police officers while trying to drive away from a traffic stop.” However, The Chicago Tribune now reports that, “O’Neal struck two Chicago police vehicles in the sports car, and two officers fired at him while he was in the car, authorities said. O’Neal fled from the car, police said, and a third officer chased him behind a home. After O’Neal refused to stop, the officer shot him.” That officer’s body camera did not capture the actual shooting, but body cameras from two other officers who also fired their weapons did.

Chicago media said that O’Neal was the driver; for example, ABC 7 reported, “O’Neal was driving the vehicle, which crashed into a police cruiser and then sideswiped another before two officers started shooting from inside their car. A third officer got out of their car and fired, what police believe, was the fatal shot.” However, O’Neal’s cousin, Zhivago Short, 20, told Heavy, “He wasn’t the driver.” There was also at least one other teenager in the car.

Chicago Police Superintendent Eddie Johnson on July 30 “relieved two officers of their police powers,” ABC News says. On Saturday, he relieved the third officer who fired his weapon of his powers, too, said the Tribune.

The Chicago Police Department’s spokesman, Anthony Gugliemi, told the news media on Friday that “departmental policies may have been violated by the (first two) officers” stripped of police powers, said ABC. That finding is only preliminary, cautioned The Chicago Tribune. Gugliemi said the day after the shooting that “command staff determined a third officer who discharged his weapon didn’t violate department rules.” But that was before the medical examiner’s office determined that O’Neal was shot in the back.

1. O’Neal Was a Recent High School Graduate With Many Interests & Was Killed During an Investigation Into a Stolen Vehicle

Zhivago Short, O’Neal’s cousin, said that O’Neal had recently graduated from Chicago’s Excel Academy, a high school on an accelerated program. He said that O’Neal’s mother is a chef and recalled O’Neal as “an outgoing person who made everyone laugh. He graduated; he did good.”

Short said that O’Neal, as is typical of many people his age, wasn’t sure what he wanted to do with his life, but he described the teenager as having many interests, ranging from professional boxing (he quit boxing training because of the cost) to becoming a chef like his mother. He also talked about working on cars and going into business.

Bolingbrook police released video on Aug. 3, “which they said shows O’Neal just hours before he was shot and killed by police.” The police said “cameras recorded O’Neal, wearing a backpack, and other men with several stolen cars, including a Buick, at a Speedway Gas Station,” said ABC 7.

The Chicago Tribune says that First Deputy Superintendent John Escalante told reporters at the scene that, as the officers got out of their car, the Jaguar’s driver “put the vehicle in drive and literally forced his way out.” The Tribune added that, according to police, an officer “continued to follow the fleeing offender.”

On Twitter, people were raising questions about that scenario.

Running from cops should never be a death sentence. RIP #PaulOneal

Indeed, the videos show a different scenario, in which the Jaguar rams head-on into a squad, and officers give chase as O’Neal flees on foot. The video shows officers shooting at the vehicle after it has already drive past. The fatal shot is not captured on video, but the aftermath and moments leading up to it are.

The Jaguar had been stolen earlier from a Chicago-area suburb, says The Sun Times. O’Neal’s death was ruled a homicide by the media examiner; in medical examiner terminology, that is not the same as a criminal ruling of homicide. It means that O’Neal’s death was caused by another person and was not a suicide or accident and is not an assessment of criminal responsibility, said The Tribune. Prosecutors assess criminal responsibility. The Cook County Medical Examiner’s office confirmed to Heavy that O’Neal was shot in the back and the manner of death was listed as “homicide.” The autopsy report has not yet been released in the case. 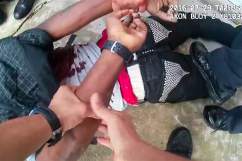 Short told Heavy that he himself used to be involved in street life, but he now spends most of his time at work, school or church. About a month ago, Short, who said he was raised in the same house as O’Neal, said O’Neal brought up “black-on-black crime” to him, as well as police shootings of young black men.

He asked Short: “What made you get out of gang life?” Short recalled. Short tried to give his younger cousin advice, and said, “he soaked it in, but in the end of the day, he was in the car.” He said he did not know the circumstances that led up to that. O’Neal’s family has filed a federal civil rights lawsuit.

He said that O’Neal brought up shootings of young black men by police and also brought up the Trayvon Martin death by a former neighborhood watch captain, and said, “it was unfair that black people don’t get fair treatment.” Short said that O’Neal was not a gang member but that he hung out with a mixed group, some in the “wrong crowd” and others not. He said that O’Neal had enormous potential and was a good person whose death has been very traumatic to his family.

According to a July 25, 2016 article by Reuters, “The Chicago Police Department updated its policy on use of deadly force, prohibiting officers from shooting at moving vehicles if no other weapons were being used against police.” Reuters said police made that move after Antwon Golatte was shot multiple times in 2015 “after he drove off in his Lincoln SUV as police tried to stop him after an alleged drug transaction.”

A few days before O’Neal’s shooting, Golatte held a news conference in which he said he wanted officers to step down because Chicago’s law enforcement review board had issued what Reuters calls a rare finding that the shooting of Golatte was unjustified.

In the O’Neal death, the Sun-Times initially said that the “Jaguar was blocked in by at least two police vehicles, but the driver tried to take off.” The Sun Times says it was not clear how many officers were injured in the shooting, which occurred at 7:30 p.m., although multiple offers suffered non life-threatening injuries.

3. Police Said They Did Not Find a Gun at The Scene & O’Neal’s Family Wanted All Videos Released

Charles O’Neal, Paul’s paternal uncle, told Heavy, “Now is not the time to examine the alleged actions of a young man who cannot defend himself. After all, he was found guilty and sentenced already. He has no higher price to pay for his mistakes, real or imagined.”

He said the family is asking “the Chicago Police Department to put aside the false reports and speculation (from the regular media and social media) by releasing all available video of the incident and full written descriptions of the events surrounding my nephew’s death, including the names of all CPD personnel at the scene and witness statements.”

Charles O’Neal said that Paul was loved by a large family on his father’s side as well and that “Paul’s Father is a retail manager in California; he requested time off work and flew to Chicago on the earliest possible flight when he was contacted about his son’s death…We also ask that you join us in praying for our city to have healing and peace.”

WPTV, quoting the Associated Press, said the shooting remains under investigation. Among questions needing answering: Why the officers opened fire and who stole the Jaguar. “When the incident was over, police did not find a gun, either on the street or inside the stolen vehicle,” the police spokesman said, according to The Associated Press.

Chicago Police Superintendent Eddie Johnson told NBC 5 that, even after the preliminary review, “I am left with more questions than answers. As it appears right now, departmental policies may have been violated during the incident. Johnson said, “When officers engage in intentional misconduct or inappropriate behavior, they have to be held accountable.”

The police spokesman added: “At this moment the department has, unfortunately, more questions than we do answers,” said WBTV, citing the Associated Press. (Although a tribute poster that O’Neal’s cousin, Zhivago Short, posted on Facebook spells O’Neal’s name as “Paull,” and a hashtag is now trending for #PaullONeal, Short confirmed that the teenager’s name was Paul with a single “L.”)

4. Police Were Wearing Body Cameras During The Shooting But One Didn’t Work & O’Neal’s Friends Are Raising Questions About What Happened to Him

Police released video from the body cameras worn by two of the three officers who fired at O’Neal as well as squad videos. “A third camera was not working properly,” ABC 7 says. That’s the camera worn by the officer who fired the fatal shot, and it’s not clear yet why it wasn’t working.

Lamon Reccord, a friend of O’Neal’s, is a well-known activist, according to ABC7. On Facebook, Reccord calls himself, “One of the youngest social activist in America.” He told the TV station, “I’m tired. I’m fed up.” Reccord wrote several lengthy posts on Facebook about the shooting:

In addition, cameras inside the squad cars activated, said the news station. The videos also capture officers using expletives toward O’Neal as he lies wounded and face down. The NBC affiliate says Johnson has reviewed those as part of his preliminary investigation as well as talking to detectives on scene.

5. Vigils Were Held For Paul O’Neal In Chicago After The Shooting & Video Recorded a Fight at One of Them

The Chicago Tribune said a relative and activist were among those who spoke at the vigil. Watch a video of the vigil here.

“This type of stuff can’t happen on this block. It can’t happen in this city,” Aleta Clark, a community activist, says in The Tribune video. “We’ve got to do better.” The Chicago Tribune said that a man pushed O’Neal’s sister, Briana Adams, during the rally as she quietly asked people to respect her brother; officers rushed to the scene, said the newspaper. One video posted on YouTube appeared to capture a fight at a vigil for O’Neal:

Short spoke at that rally. He said angrily, “I can’t get my cousin back… that’s my baby cousin and I can’t see that him no more. That (expletive’s) sad, man….I lost my little cousin to this (expletive).” Protesters interrupted a press conference the police superintendent was scheduled to give after the videos’ release.

Loading more stories
wpDiscuz
42
0
Would love your thoughts, please comment.x
()
x
| Reply
Paul O'Neal, 18, was shot to death by Chicago police, and the medical examiner says he was shot in the back. Three officers were relieved of police powers for possibly violating department policies, news reports said.