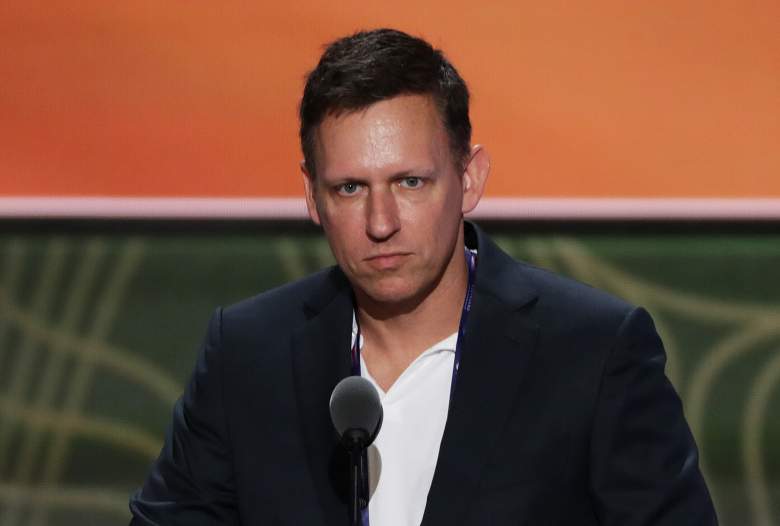 Peter Thiel has been a smart investor in technology. (Getty)

Peter Thiel has been in on the beginning stages of many successful technology companies. He moved to the United States as a young child from Germany and later helped start PayPal. He was one of the first investors in Facebook and was also an early investor in a number of companies including Spotify.

According to Forbes, he has a net worth of $2.7 billion. He was ranked 230th on Forbes list for top billionaires in the United States. Thiel is the 62nd richest person in the tech category.

Despite being a Libertarian, Thiel has been vocal in his support of Donald Trump for president and spoke about him at RNC 2016. From his business ventures to contrarian beliefs, there is a lot to learn about Thiel.

In a 2007 article entitled “Peter Thiel is totally gay, people”, Gawker outed Thiel as being gay. In the article, author Owen Thomas discussed how those in Silicon Valley knew Thiel was gay but not the general public. Thomas ended the article by saying, “That’s why I think it’s important to say this: Peter Thiel, the smartest VC in the world, is gay. More power to him.”

The article began Thiel’s quest to destroy Gawker. The article appeared on one of Gawker’s blogs called Valleywag, a site Thiel told Forbes it was the “Silicon Valley equivalent of Al Qaeda.”

Thiel has admitted that he secretly paid some of Hulk Hogan’s legal fees when he sued Gawker after the website posted a sex tape with Hogan. Thiel paid an estimated $10 million to help with the fees and explained to The New York Times why he did.

“It’s less about revenge and more about specific deterrence. I saw Gawker pioneer a unique and incredibly damaging way of getting attention by bullying people even when there was no connection with the public interest,” Thiel told The New York Times.

Hogan won the lawsuit and won a total of $140 million.

3. Thiel Is the Co-Founder of PayPal

Thiel and Max Levchin founded the company in 1998 under the name Confinity. It originally was started to give PDA users access to a “virtual wallet”. According to Business Ideas Lab, when online payment technology began eBay sellers started using PayPal causing it to increase in popularity. They would put the logo on their pages and the company began to grow. In 2002, the company went public.

Since then, Thiel has used his success to help others. According to ABC, he launched the Thiel Fellowship to help people create new technology. Thiel has been critical of the United States educational structure and the fellowship encourages interested college students to drop out of school to create their own companies.

4. He Was an Early Investor in Facebook & Backs Airbnb

Thiel was one of the first outside investors in Facebook. The investment paid off after Thiel sold his shares of the company in 2012. According to CNN, Thiel was able to turn his $500,000 initial investment to $1 billion.

In addition to Facebook, he also placed early bets on Airbnb, Spotify and Lyft through his investments. Thiel often speaks about being a contrarian and looks to invest in companies that does not have a lot of initial interest.

5. Thiel Was the First Speaker to Address a GOP Convention to Proudly Speak About Being Gay

While Arizona Rep. Jim Kolbe address the RNC in 2000, he spoke only about trade deals and did not address his sexuality. According to The Washington Post, Thiel was expected to speak about being proud of being gay and push the GOP to focus on economic issues rather than bills about what bathrooms people can use.

Thiel himself is a Libertarian, but is a supporter of Donald Trump. While it appears Trump’s economic policies are the big reason for Thiel’s support for Trump, there is some skepticism about Thiel’s endorsement given they are at odds about other policies.

“Every time I read [Thiel’s support for Trump], I typically check the calendar because I’m not completely sure it’s not April 1. It wouldn’t surprise me if the underlying reality of his choice were the sheer contrariness of what he is doing,” PayPal co-founder Max Levchin told Bloomberg.

Loading more stories
wpDiscuz
1
0
Would love your thoughts, please comment.x
()
x
| Reply
Peter Thiel is one of the first openly gay speakers at the Republican National Convention. Learn more about the billionaire entrepreneur.