“Thank you Bernie!,” some supporters said, as people driving by honked their horns in appreciation. Some supporters asked if they could get a selfie with him and other said, “You’re my hero Bernie, thank you!” One supporter yelled, “We need you! We need your movement!”

After Bernie and Jane went inside the hotel, the Facebook group Bernie Sanders Brigade interviewed one of his supporters, Noah, who had traveled all the way from California to protest and support Sanders. He had tears in his eyes and said seeing Bernie was bittersweet.

He’s with us every day, we’re with him every day… To see him out on the streets with us is just… It gives me hope that it’s not over. I know he’s not going to be our president this time, but he’s given us all hope, he’s showed us how to make change…”

Here’s another perspective, shared on YouTube. You can hear someone in this video asking, “How can we trust Clinton?”

Bernie Sanders sighting outside City Hall in PhiladelphiaAs we were leaving the McDonald's my friends spotted Bernie Sanders walking down the street going to his hotel2016-07-28T16:18:00.000Z

To see a live stream of tonight’s Convention and of protests for the final day of the DNC, please see our story below: 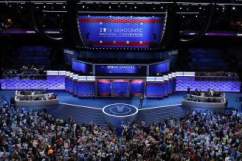 Read More
Bernie Sanders, Politics
As Bernie Sanders and his wife, Jane, returned to their hotel, his supporters walked with him, cheering and thanking him. See the videos here.