A sign reading, “Justice for Philando,” and police tape are draped over the entrance of the Governor’s Mansion following the police shooting death of a black man on July 7, 2016. (Getty)

Jeronimo Yanez and Joseph Kauser have been identified as the St. Anthony police officers who were involved in the fatal shooting of Philando Castile Wednesday night in Falcon Heights, Minnesota, in a shooting that has captured national attention after video of the aftermath was streamed live on Facebook by Castile’s girlfriend.

It was Officer Yanez who fired the fatal shots.

Castille was killed during a traffic stop. His girlfriend, Diamond Reynolds, was in the car, along with her 4-year-old daughter, at the time of the shooting.

Reynolds said in the video that Castile was shot multiple times while reaching for his wallet to get his license and other information. Castile had told the officer he was legally carrying a gun, Reynolds said. They had been pulled over for a broken tail light, Reynolds said.

Castile, 32, was a popular school cafeteria manager in Saint Paul. He had no major criminal record and his girlfriend said he had a license to carry a concealed weapon.

The shooting occurred in Falcon Heights, a town near Saint Paul where the St. Anthony Police Department is contracted to patrol. The small department has just 23 sworn officers.

1. Yanez, With His Gun Drawn, Yelled ‘I Told Him Not to Reach for It’ While Talking to Castile’s Girlfriend After the Shooting

The graphic video, which you can watch above, recorded by Diamond Reynolds and streamed live on Facebook starts as Castile is dying in the driver’s seat of the car.

“Stay with me. We got pulled over for a busted tail light in the back,” Reynolds said. “They killed my boyfriend. He’s licensed he’s carried so he’s licensed to carry. He was trying to get out his ID and his wallet out his pocket and he let the officer know that he was that he had a firearm and he was reaching for his wallet and the officer just shot him in his arm.

As Reynolds describes what happened, the officer can be heard saying “I told him not to reach for it,” before yelling “f*ck.”

Officer Jeronimo Yanez pictured in the Standing of the
Memorial Guard event as part of Law Enforcement Memorial Day and National Peace Officer’s Day in May 2015. (City of St. Antony)

Reynolds then says, “He had, you told him to get his ID, sir, his driver’s license. Oh my god please don’t tell me he’s dead,” and the officer says “f*ck” again.

The video also shows that the officer does not provide first aid to Castile as he bleeds in his seat. Minnesota Governor Mark Dayton criticized officers during a press conference Thursday, saying they comforted the officer, who was shaken up by the shooting, but did not help the dying Castile.

Investigators have released few details about the shooting, citing the open investigation.

2. Both Have Been Cops in St. Anthony for 4 Years

Pastor Patricia Bell, right, of St. Paul, Minnesota, prays on July 7, 2016, with Gabriella Dunn and her children Oakland Dunn, 1, and Chloe Dunn, 4, at the scene of the latest shooting of a black man by police in Falcon Heights, Minnesota. (Getty)

Both officers have been with the St. Anthony Police Department for four years. They were named in a press release from the Minnesota Bureau of Criminal Apprehension.

Little else is known about the officer, including his disciplinary record. City reports from 2014 and 2015 detail Kauser and Yanez’s roles in community policing such as working in crime prevention units and helping the public with bike safety.

The officer has been placed on paid administrative leave while the shooting is investigated, the St. Anthony Police Department said.

The Minnesota Bureau of Criminal Apprehension, the state-level police agency, will be leading the investigation, according to officials. They will gather evidence to present to Ramsey County Attorney John Choi to make a decision on criminal charges. They have not said how long it will take for the investigation to be completed.

The Department of Justice told Governor Mark Dayton they will be monitoring the investigation and can assist as necessary.

Both Yanez and Kauser were interviewed by investigators the afternoon of July 7, the governor said.

3. Officer Yanez Is Married With 1 Child

According to a now-deleted online registry at The Knot, Officer Jeronimo Yanez married a woman named Lyndsay Engstrom in November 2014. They live in Forest Lake, Minnesota, with their baby who was born on August 4, 2015.

4. Minnesota’s Governor Says He Doesn’t Think Castile Would Have Been Killed if He Was White

Minnesota Governor Mark Dayton said at a press conference there is “every indication” excessive force was used in the shooting and said he does not think Castile would have been shot dead if he was white.

“Would this have happened if those passengers, the driver were white?” he asked. “I don’t think it would have.”

“But regardless of the outcome of such investigations, what’s clear is that these fatal shootings are not isolated incidents,” Obama said in a statement. “They are symptomatic of the broader challenges within our criminal justice system, the racial disparities that appear across the system year after year, and the resulting lack of trust that exists between law enforcement and too many of the communities they serve.” 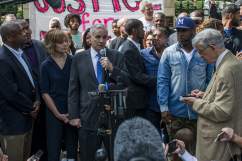 5. Castile Was Loved by the Kids at the School Where He Worked & Was a ‘Good Man,’ His Family Says

His yearbook photo. #PhilandoCastile isn't just a hashtag. He worked with kids. His life had value. He was murdered. pic.twitter.com/2rd5spD154

Castile worked as a cafeteria supervisor at J.J. Hill Montessori School in St. Paul. A statement from the school system said Castile was hired in 2002, at age 19, and was promoted to supervisor two years ago. The statement described him as a “team player who maintained great relationships with staff and students alike” and said he was “quick to greet former co-workers with a smile and hug.”

The statement included this glowing assessment from a co-worker: “Kids loved him. He was smart, over-qualified. He was quiet, respectful, and kind. I knew him as warm and funny; he called me his ‘wingman.'”

“This was a GOOD MAN,” a parent of a child at the school wrote on Facebook, saying that Castile snuck extra graham crackers to children and hugged a borderline autistic child every day. He “pushed extra food in them like a grandma” and took care to know every single child’s name.

Philando’s uncle, Clarence, said Philando had worked in the cafeteria for 12 to 15 years “cooking for the little kids,” according to the Minneapolis Star-Tribune. Clarence Castile called Philando “a good kid” and said he grew up in St. Paul, Minnesota, also living in Minneapolis.

Philando Castile's mom Valerie: "He lived by the law & died by the law." #FalconHeights pic.twitter.com/sgs7bdYFlG

Castile’s mother told the Star-Tribune that her son had worked all of his adult life. “They killed my son,” she said. “They took a good man, a hard-working man; he worked since he was 18 years old.”

Loading more stories
wpDiscuz
144
0
Would love your thoughts, please comment.x
()
x
| Reply
The cops involved in the fatal shooting of Philando Castile have been identified.