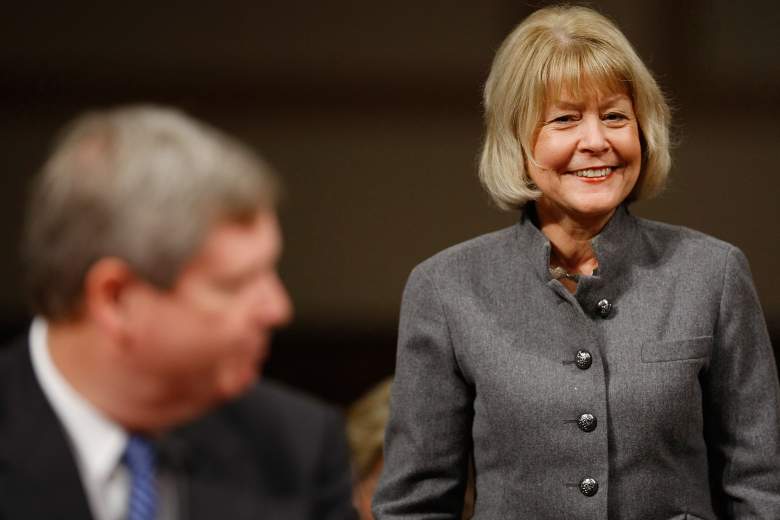 Tom Vilsack is the 65 year-old United States Secretary of Agriculture who has quickly jumped in rank to the second highest predicted nominee in the Democratic veepstakes. His wife, Christie Vilsack (born Ann Christie Bell), is no stranger to public life and service. In addition to supporting her husband as First Lady of Iowa, Vilsack, 66, has also shown her own personal political ambitions. She has been a life-long champion of improvement and access to literary programs, which lead her to her current prominent role at the United States Agency for International Development.

Here’s what you need to know about Christie Vilsack.

1. She Is The Senior Advisor for International Education at USAID

Christie works with education sector partners and education leaders worldwide to build understanding of and support for international education solutions. She travels the world visiting and learning about USAID programs so she can tell the story of USAID Education to anyone she meets from Main Street to the halls of Congress.

2. She Is A Former Teacher & Journalist 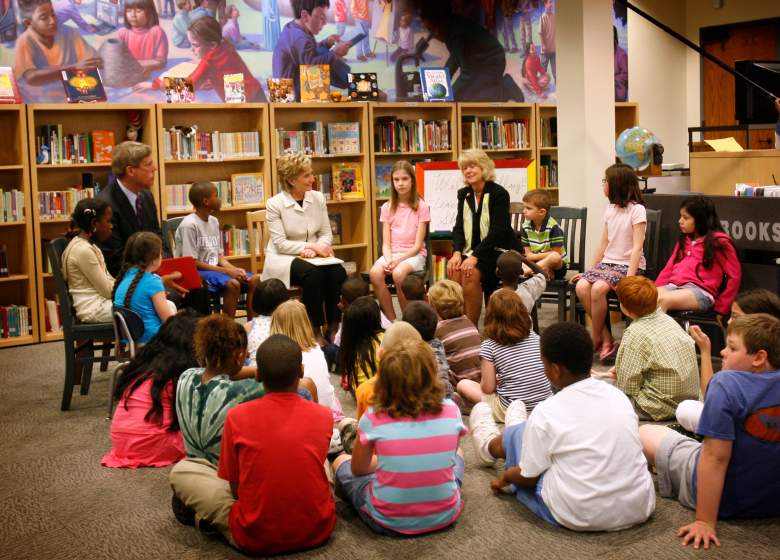 Vilsack, pictured in Iowa with husband Tom Vilsack, Hillary Clinton and elementary school students, has been a champion for improved literacy and education programs. (Getty)

Vilsack’s position at USAID builds on many years of experience as an educator. According to her USAID profile, she was a journalism and English teacher for 25 years at middle school, high school, and college levels. She was a professor of English and journalism at Iowa Wesleyan College for six years, where she now serves on the Board of Trustees as a Trustee Emeritus.

Vilsack tackled literacy and education issues as First Lady of Iowa between 1999 and 2007 while her husband Tom was governor. During this time she founded the Iowa Stories 2000 Foundation (later renaimed the Vilsack Foundation), which focused on highlighting the value of local libraries within communities, family storytelling, and early childhood reading. Vilsack’s efforts were impressive: she read to thousands of children in more than 500 libraries across the state (Iowa Public Library Statistics show the state currently has 544 public libraries). She also gave a book to every kindergartner in the state from 2000 to 2006. In 2013 the Vilsack Foundation donated $50,000 to the “Reach Out and Read” program, which provides a book to every child at a doctor’s visit.

Before closing, the Vilsack Foundation focused on promoting computer literacy through grants and corporate partnerships, and also promoted family media literacy in partnership with the National Center for Family Literacy. The partnership to promote media literacy incorporates not only Vilsack’s passion for literacy issues but also her education and previous experience: in 1992 she earned her master’s degree in journalism from the University of Iowa, and she previously worked for the Mount Pleasant News as a columnist and reporter.

In 2004, on the eve of delivering a speech at the Democratic National Convention, racial controversy stirred around columns Vilsack wrote in 1994, an issue Democrats said was a GOP orchestration in an attempt to divert attention from topics of real importance.

3. She & Husband Tom Have Been Married For 42 Years 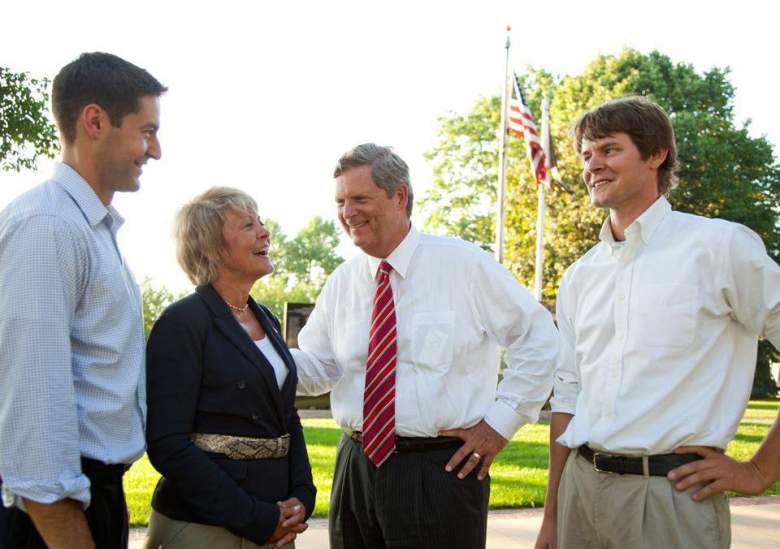 Christie Bell met Tom Vilsack in 1968 as college freshman at Kirkland College in New York. Vilsack told the Sioux City Journal that while sitting at a lunch table with friends they dared him, for five bucks, to go to Bell’s table and talk to her. Accepting the bet, Vilsack was short on ideas for starting a conversation, and used the fierce presidential race between Democrat Hubert Humphrey and Republican Richard Nixon as an opener:

For five bucks, at that point in time in my life, I’d do just about anything. So the best I could do was, ‘Are you a Humphrey or Nixon supporter?’ And she looked at me like I was half crazy, and she said, ‘Humphrey.’

The couple began dating, and were married in Iowa in 1973. They have two sons, Jess and Doug. Jess is a partner attorney at Nyemaster Goode in Des Moines, Iowa. Doug is the Executive Director of the Posner Center for International Development in Denver, Colorado. The couple lived in Christie’s hometown of Mount Pleasant before moving to Des Moines in 2008.

Vilsack’s interest in politics started at a very early age. According to the Sioux City Journal, as a child she had a preference for watching political conventions during summer months instead of riding bicycles and climbing trees with friends outdoors. Her interest in politics grew, and in high school she and her boyfriend started a Young Democrats Club. She also was the school newspaper editor and a student council member.

Vilsack considered a Senate run in 2010. At the time, she said:

I am honored that people would think of me in that way and would talk to me about running for any office and I think I’m well-qualified to run. I think I’m qualified to serve, so time will tell. You know, I’ve spent the last 12 years traveling around the state, developing a relationship with the people of Iowa and I just really appreciate the fact that people have been so supportive in suggesting this. But, as I said, time will tell.

While she ultimately chose not to enter the 2010 race, in 2012 Vilsack ran as the sole Democratic candidate for election to Iowa’s fourth district in the House of Representatives. Vilsack’s campaign focused on issues that included a broadened alternative energy plan and improved education resources. She lost by eight points to Republican candidate Steve King, the incumbent from Iowa’s fifth district. At the time that she began working at USAID she had been considering a second run against King.

5. She Is a Strong Campaigner & Advocate For Women in Politics 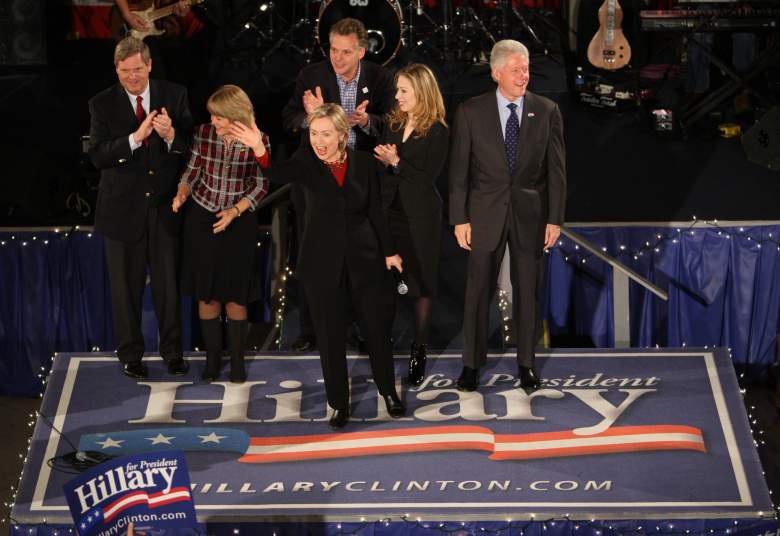 If Tom Vilsack is chosen as the Democratic vice presidential nominee, Christie Vilsack could play a significant role on the campaign trail. Her experience running her own campaign and supporting those of her husband could make for a persuasive addition to the Democratic ticket. Vilsack has a history of advocating for more women to enter politics, and has been successful wooing both donors and constituents.

When interviewed by the Washington Post about King’s criticism that Vilsack was running as a proxy for her husband, she responded that although her husband has been a mentor in entering political life, King’s comments implied she, and women, must be seen for their own capabilities and in their own right:

Women broke the sod here in Iowa. And the land that now produces all that corn and bean and eggs is because women came out here and lived this life and were pioneers. And almost every woman in this state my age or older didn’t have much choice about which jobs they had, and most of them were teachers. So if you’re going to suggest that women haven’t done anything or what I’ve done in my life isn’t worthy, then I think you’re going to offend a lot of people.

During her Congressional race, then Vice Presidential First Lady Jill Biden campaigned on her behalf, reinforcing the place for women in prominent political office:

Well, we’re all here this afternoon because we don’t want any young girl, any child growing up in the 4th District and thinking there isn’t a place for women in Congress. There is. There’s a place for Christie Vilsack. […] Christie stands for women and their choices. She stands for family and the education of their children. And today, and all the way to November and beyond, we stand with her.

In 2012 Sue Dvorsky, who was at the time Iowa Democratic Party Chairwoman, recalled first meeting Vilsack in 1997, calling her “magnetic” and a significant draw for voters in her ability to connect with and discuss issues with constituents.

Former journalist and head of the Board of Directors Vision Iowa Michael Gartner also considers Vilsack’s ability to connect with voters part of her campaign success:

A good grassroots politician is somebody who can connect with people. And she truly loves that kind of connection. That is real — that is not spin from me and shtick from her — that is real. She is a very, very good campaigner because of the things that make her a good person, and some of those are the things that made her a good teacher, that organization, self-discipline, the embrace of hard work. You can’t really buy that kind of thing and you can’t really fake it. In a long campaign, if you don’t like campaigning, it is very hard to hide that from people. She really likes it — she likes talking to people, she likes talking about ideas.

Vilsack also has the ability to draw significant campaign funds from donors. According to The Des Moines Register, when Vilsack ran against King in 2012 she raised $1.54 million in campaign contributions to King’s $1.27 million, notable given King’s ultimate eight point win and popularity as an incumbent.