Hillary Clinton and Sanders united at an event in New Hampshire on Tuesday, where the Vermont senator officially endorsed Clinton.

Sanders spoke first, followed by Clinton at an event designed to move the party closer to unity in the race against Donald Trump.

Together, we have begun a political revolution to transform America and that revolution continues. Together. Not me, us.

Sanders began by thanking New Hampshire, his campaign volunteers and the entire state of Vermont for their support of his presidential bid.

“We have begun a political revolution to transform the United States of America,” he said.

“Together we will continue to fight for a government that represents all of us and not just the one percent, a government based on the economic, social, racial and environmental justice,” he said. “I am proud of the campaign we ran here in New Hampshire and across the country.”

Although Clinton was declared the presumptive nominee in early June, Sanders refused to concede, vowing to continue his campaign, until now.

“I have come here to make it as clear as possible why I am endorsing Hillary Clinton and why she must become our next president.”

By holding out on his endorsement, Sanders leveraged his position and brought Clinton to the table. His goal: to cajole Clinton into accepting some of the core issues of his campaign.

“Hillary Clinton understands that we must fix an economy in America that is rigged and that sends almost all new wealth and income to the top 1%,” Sanders said during his address in New Hampshire.

“She believes, we all believe, that we must raise the minimum wage to a living wage. And further, she wants to create millions of new jobs by rebuilding our crumbling infrastructure,” he said. “But her opponent, Donald Trump, well, he has a very different view.”

“The profound lesson that I have learned is that this campaign is not really about Hillary Clinton or Donald Trump or Bernie Sanders,” Sanders told the crowd. “This campaign is about the needs of the American people and addressing the very serious crises that we face. And there is no doubt in my mind that as we head into November, Hillary Clinton is far and away the best candidate to do that.”

During his speech, Sanders called Clinton a “fierce advocate for the rights of our children” and “one of the most intelligent people that we have ever met.”

He concluded by saying, “Hillary Clinton will make an outstanding president and I am proud to stand with her.” 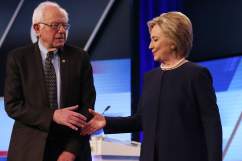 How a Bernie Sanders Endorsement Could Help Hillary Clinton