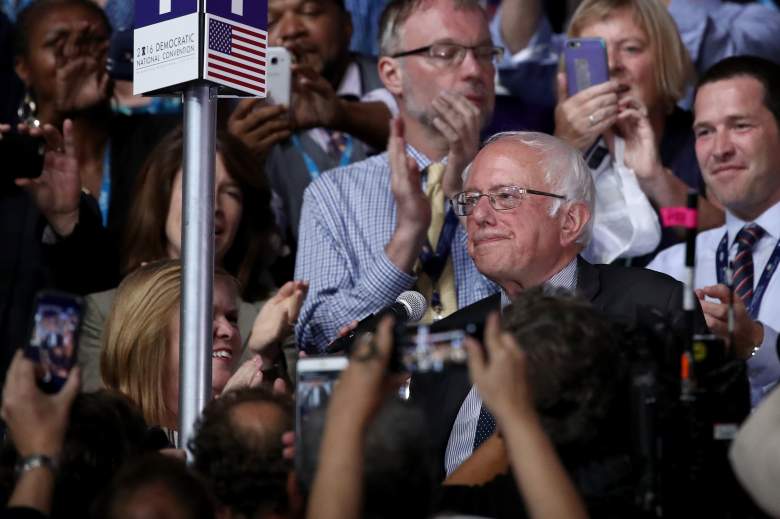 Bernie Sanders sat with the Vermont delegation during the roll call. (Getty)

During the roll call of delegates at the Democratic National Convention, the Vermont delegation was skipped to go last, after Wyoming. Bernie Sanders, Hillary Clinton’s rival in the Democratic primaries, rushed down to the delegation and sat while the delegation announced their votes. Although Sanders called for Clinton to be nominated for the Presidency, he didn’t technically call for her to be nominated “by acclamation.”

“Madam chair, I move that the convention suspend procedural rules. I move that all votes cast by delegates be reflected in the official record,” Sanders said. “And I move that Hillary Clinton be selected as nominee of the Democratic Party for President of the United States.”

Bernie Sanders OFFICIALLY Nominates Hillary Clinton During Rollcall Vote At DNC 7/26/16Bernie Sanders Nominates Hillary Clinton For President During Rollcall Vote At DNC 2016 democratic national convention. Philadelphia Democrats made Hillary Clinton the first female presidential nominee of a major party in the nation's history on Tuesday, shattering one of the last remaining glass ceilings in American politics. The former first lady, New York senator and secretary of state was formally installed as the party nominee to take on Donald Trump on an emotional night at the Democratic convention in Philadelphia. Bernie Sanders, in a move to bridge the divide in the Democratic Pary, on Tuesday moved to nominate Hillary Clinton by acclamation as the Democratic nominee for president. His motion came after nearly two hours of roll call votes and was greeted with chants of "Bernie, Bernie." The Vermont has waited 15 months to watch his delegates cast ballots for him at the Democratic National Convention. It wasn't exactly the moment Sanders had hoped for, now that his primary rival, Hillary Clinton, has locked up the nomination. But during his speech to the convention on Monday, Sanders told his delegates he looks forward to their votes, even while urging them to help Clinton Vermont went last in the roll call of states. After all Clinton and Sanders delegate number were announced, Sanders said, "I move that Hillary Clinton be selected as the nominee of the Democratic Party," he kissed his wife Jane, and waved to the cheering crowd.Clinton will formally accept the nomination on Thursday night, before embarking on an intense fall campaign with polls showing her clash with Republican nominee Trump is, for now, too close to call. South Dakota put Clinton over the top of the 2,382 delegates needed to win the nomination. The roll call will continue through the full roster of states and territories. Sen. Barbara Mikulski of Maryland emphasized the historic nature of the moment in nominating Clinton Tuesday afternoon. "On behalf of all the women who've broken down barriers for others, and with an eye toward the barriers still ahead, I proudly place Hillary Clinton's name in nomination to be the next President of the United States of America," Mikulski said. Nancy Pelosi, a history maker in her own right after becoming the highest ranking woman in the history of the US government when she was elected House speaker in 2007, was overcome with emotion as she contemplated Clinton's achievement. "It's beyond thrilling. It's very exciting and to see at the end she's the nominee. It's going to be spectacular," Pelosi told CNN's Dana Bash. "It's pretty exciting … she's the best." As part of the push to bring Democrats together, following repeated shows of dissent from disenchanted Sanders supporters from the floor on Monday, the Vermont senator's campaign is asking for his home state to go last in the roll call. He would move for Clinton to be acclaimed the party nominee unanimously, his spokesman Michael Briggs said Tuesday. Such a move would reprise Clinton's similar gesture at the 2008 Democratic National Convention in Denver, after her own divisive primary duel against then-Sen. Barack Obama.2016-07-26T22:58:28.000Z

This was similar to what happened eight years ago. Clinton was in the same position after losing the nomination to Barack Obama. However, she did move to have Obama nominated “by acclamation.” 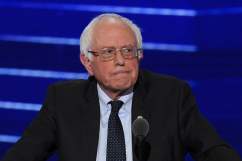