Ivanka Trump has become a central figure in her father’s quest for presidency. Donald Trump’s oldest daughter took center stage Thursday night at the Republican National Convention as she introduced her father in a speech which is normally reserved for the nominee’s spouse.

His children Tiffany, Donald Jr., Eric and wife Melania have all spoken over the course of the convention.

Ivanka, 34, balances many roles: she’s a businesswoman, entrepreneur, author, wife and mother of three. She has also become one of her father’s most trusted advisers on the campaign trail.

Ivanka began her speech on Thursday night by saying, “For more than a year, Donald Trump has been the people’s champion, and tonight he is the people’s nominee.”

“This is the moment, and Donald Trump is the person to make America great again,” she announced to the crowd. “Real change, the kind we have not seen in decades is only going to come outside the system.”

She went on to explain how Trump thrived as an entrepreneur.

Ivanka also recounted stories of how her father has reached out to those less fortunate over the years. After reading their stories in the newspaper, she said Trump would ask his assistant to find the person and invite them to Trump Tower in an effort to help them.

“I have witnessed his empathy and generosity towards others, especially those who are suffering,” she said.

Ivanka emphasized his record hiring women to work for him.

“He is color blind and gender neutral,” she said. “When Donald Trump is in charge, all that counts is ability, excellence and effort.”

She closed the speech by saying, “When my father says that he will make America great again, he will deliver.”

Ivanka currently serves as an executive vice president of the Trump Organization where she manages the company’s international hotels and golf courses.

“She is very, very trusted by me,” Trump told the New York Times in April. “She has great real-estate instincts and great political instincts.”

The focus of tonight’s speeches was “Make America One Again.” 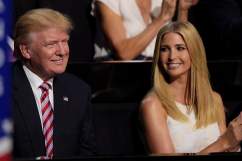