Gulbis recounted the first time she played golf with Trump in 2005 and spoke with the candidate about two topics: her wish to open a Boys and Girls Club, and her frustration at the gender disparities of her sport. She stated that Trump encouraging her to “never fear challenging the status quo” as a woman in business. She also attributed her opening of the Natalie Gulbis Boys and Girls Club to help from Trump.

MSNBC host Rachel Maddow couldn’t hide her sarcasm at the choice of Gulbis as a keynote speaker, pointing out “She’s the 492-ranked pro golfer in the world. She was also on celebrity apprentice. It’s continuing a theme tonight of putting on people who are not well known.”

While reaction on Twitter to Gulbis’ speech was quite positive, there were some who seemed to feel the irony of a woman praising Trump’s support for helping her to fight gender inequalities in the status quo.

@natalie_gulbis what about the Mexican and Muslim women with the same hopes and dreams as you??

During the speech Gulbis did not specify exactly how Trump helped her to open the Boys and Girls Club in Nevada, but told Golf magazine in June that the money she raised while appearing on Celebrity Apprentice helper her to open the center.

Washington Post reporter David Fahrenthold investigated whether Trump made financial contributions to the Gulbis’ Boys and Girls Club and found none on record.

#236 @natalie_gulbis speech from RNC, sounded like @realdonaldtrump gave her a charitable donation. I checked. No. pic.twitter.com/WmTT3yVjhU

3/@natalie_gulbis credited @realdonaldtrump with "helping" her charity. But he gave $0 to it. pic.twitter.com/ZHWW0D2wI5 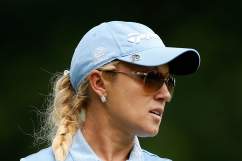