Nearly a year ago, Democratic presidential candidate Martin O’Malley said the DNC was rigging the system through a limited debate schedule. In a press conference after, he said he was talking about the system being rigged for Clinton. Few took him seriously then, but it’s likely he’s feeling vindicated now. His part about the rigging begins around the 3:00 mark in the video above.

WikiLeaks released nearly 20,000 DNC emails, many which revealed deep dislike of Sanders’ campaign on the part of many Democratic party officials, along with overt efforts to help Clinton’s campaign despite DNC rules requiring the party stay neutral. (Read the most damaging emails in our story here.) Sanders said this morning that he still believed Debbie Wasserman Schultz should resign. She will have a greatly reduced role at the Democratic National Convention this week. But for Sanders supporters, this isn’t enough.

O’Malley called out the DNC on this topic back in August 2015, which you can see in the video above.

The National Review reported back in August 2015 that the former Maryland governor spoke out against Debbie Wasserman-Schultz during a DNC summer meeting in Minneapolis. His speech, described as “fiery,” slammed the debate schedule. He said they were told there would be only four debates, even before the earliest states had made any decisions.

“This sort of rigged process has never been attempted before.”

Who’s decree is this? Where did it come from? To what end, for what purpose… How does this help us tell the story of the last eight years of Democratic process? … How does this help us make our case to the American people? One debate in Iowa, that’s it? … And get this, the New Hampshire is cynically wedged in the high point of holiday shopping season, so as few people watch it as possible. Is this how the Democratic party selects its nominee? … Or are we becoming something less, something else?”

His speech got a standing ovation. The National Review reported that later when he was talking to the press after his speech, O’Malley explicitly said the limited debate schedule was connected to the DNC’s bias toward Clinton. A reporter asked if he was hinting about that and he said:

I don’t think I was hinting. I thought I was pretty clear.”

Read more about the WikiLeaks emails and a DNC lawsuit below: 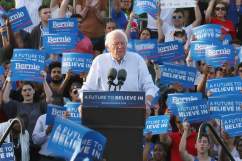 Loading more stories
wpDiscuz
0
0
Would love your thoughts, please comment.x
()
x
| Reply
O'Malley said the DNC was rigging its debates 11 months ago. Talking with the press later, he said it was being done for Clinton. Watch his speech here.