Ted Cruz on Trump: "I am not in the habit of supporting people who attack my wife and attack my father" #RNCinCLE https://t.co/2ATPY8wst2

Following a controversial speech in which he refused to endorse Donald Trump, Ted Cruz spoke to delegates in Cleveland this morning and refused to say that he’ll vote for Trump in November.

When asked what Cruz plans to do come Election Day, the Texas senator repeatedly dodged the question, saying that he’s “watching and listening” like millions of Americans. He did say, however, that he is not voting for Hillary Clinton.

Cruz’s words were not met kindly by everyone in the room on Thursday morning. One delegate confronted Cruz by saying that the senator signed a pledge and must support the party. In response, Cruz said that although he intended to honor the pledge, things changed for him when Trump began to attack his wife and his father.

However, Cruz said that he does not plan to say anything negative about Donald Trump throughout the campaign, though he will not say anything positive, either. During the Republican primaries, Donald Trump attacked Ted Cruz’s wife as being unattractive and accused his father of being involved in the JFK assassination.

In addition, Cruz responded to his reception at the Republican National Convention, saying that he finds it troubling that Donald Trump’s supporters booed his statement that they should vote their conscience. Cruz added that the Republican party is not just a club that should be supported no matter what, and he refuses to do what the leadership is pressuring him to do.

“We either stand for shared principles or we’re not worth anything,” he said.

As Cruz spoke, one man held up a sign reading “Clinton/Cruz 2020,” reflecting the opinion of some delegates that Cruz’s remarks only helped Hillary Clinton. Still, Cruz said that he won’t be blindly supporting the Republican candidate.

“I’m gonna honor the commitment I made to the voters instead,” Cruz said.

At the Republican National Convention on Wednesday, Cruz delivered a speech during which he told Republicans to “vote their conscience” in November, refusing to officially endorse Trump. Cruz clarified on Thursday what had been previously reported, though, that the Donald Trump campaign had a full copy of his speech and let him go on anyway.

Cruz also said that he spoke to Donald Trump before attending the convention and made it clear to him that he would not be providing an endorsement. 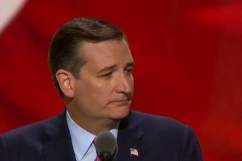