In this email from February 2016, the DNC was collecting data on Bernie voters. These are talking points, so they aren't private, but it's interesting to read nonetheless. They mention having a voter file of every door that candidates knocked on, every phone call volunteers made, and every voter contact at a town hall or county fair. Bernie supporters will be concerned about this, as it relates to their concerns about directed election fraud. Read on WikiLeaks here. (WikiLeaks) 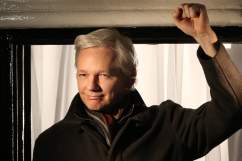 Read More
Bernie Sanders, Breaking News, Hillary Clinton, Politics
We've compiled an extensive look at the most damaging or insightful emails about Clinton and Sanders, from the WikiLeaks emails. See the best of the leaks here.