The older brother of the iconic Syrian child featured in a photo that gained worldwide attention has died from the same airstrike.

Omran, 4, has become a poignant symbol of the horrors of war since a video and photograph of the dust-covered child looking shell-shocked in an Aleppo ambulance circulated throughout the globe.

Meanwhile, his brother – and other Syrian children – have perished without as much attention.

1. Ali Died From Injuries Suffered in The Same Airstrike That Injured Omran

Ali was playing on the street when the airstrike occurred, which is probably why his injuries were so severe, said UK Telegraph.

The Syrian Observatory for Human Rights says, “Several intersecting sources confirmed to the activists of the Observatory that the child Ali died affected by the wound he had when the warplanes bombed al-Qaterji neighborhood in Aleppo city.”

The Telegraph says Ali was exposed to more of the blast than his family members because the others were inside the family’s home.

The child had been in critical condition for three days, says CNN. 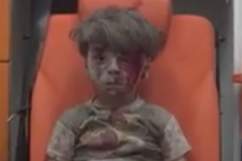 2. Omran Suffered Head Injuries But is Expected to Survive & Was Featured in an Iconic Video & Photo

One thing that struck the surgeon who treated Omran at the hospital was the fact the little boy “didn’t cry,” BBC says. Omran was videotaped and photographed as he sat in an ambulance, appearing stunned and caked in dust; the images circulated throughout the world, provoking horror, and turning Omran into a symbol of the evils of war.

However, the surgeon who treated Omran says “he has been discharged from hospital.”

A nurse told ABC News that Omran didn’t cry because he was in shock, although the boy did “ask for his parents.”

Omran suffered head wounds but had no brain injury, said The Independent.

Dr. Abu Rasoul, who treated Ali, told CNN: “His (Omran’s) brother, whose photo was not taken, no one mentioned him, he died and he is by God’s side now.”

Rasoul told the cable network, “Omran was pulled out of the rubble quickly to come back to life, Ali stayed under the rubble for a while.”

3. At Least Six Children Died in The Airstrike

Russian + Syrian regime bombs have been falling on #Aleppo all day. This 2yr old is among victims #TheOtherOmrans pic.twitter.com/tH7A7CjtrV

Overall, at least eight people died in the air strike, among them five children, said The Independent. Ali was the sixth. The family’s apartment was hit on Aug. 17, says Al Jazeera.

Some have compared the photo of Omran to that of 2-year-old Aylan Kurdi, a Kurdish refugee boy from Syria who drowned and whose small body was photographed lying on a beach. Both images have mobilized people to care about the crises they stemmed from.

#AylanKurdi #Humanity.Only few were aware of his birth and now this speechless picture is screaming. 2/2 pic.twitter.com/AYmglfFgZL

The human rights group says that, since July 31, 468 civilians, including 100 children under the age of 18, have died in Aleppo.

#OmranDaqneesh and his sister. His two other siblings and parents were all pulled out alive. (Photo: Mahmoud Raslan) pic.twitter.com/QmHesPPZvt

That account comes from the Syrian Observatory for Human Rights and “a witness who was present at the time of his death,” said Time Magazine.

Time Magazine said that Ali’s sister and mother are still in the hospital recovering from wounds incurred during the same airstrike. CNN says his mother was still in critical condition as of Aug. 20, and the family is still in Aleppo.

NBC News said that Ali died in the hospital’s intensive care unit and “had suffered serious injuries to the face, abdomen and sides. He had undergone two surgeries.”

“Ali’s heart stopped and we tried to rescue him. We did CPR for a couple minutes, but unfortunately we didn’t succeed,” an emergency room medical worker told NBC News.

5. Aleppo Is Divided in Half Between Government & Rebel Forces 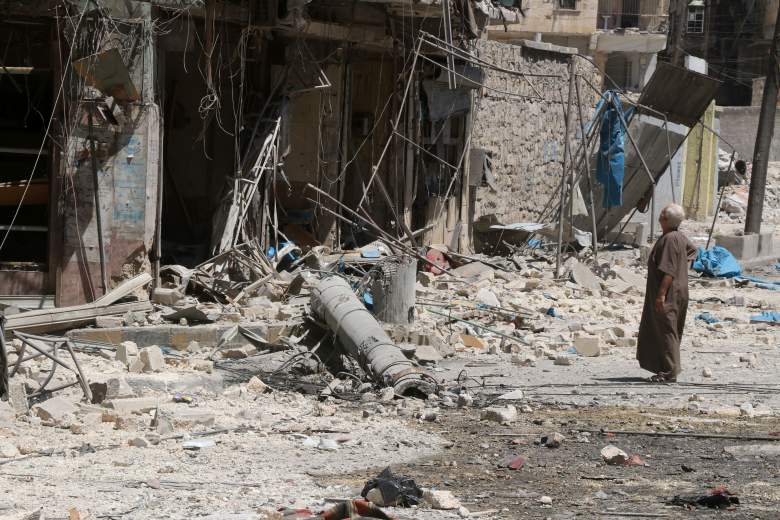 A resident of the Tariq al-Bab neighbourhood of Aleppo, inspects the damage caused by reported air raids that targeted rebel-held areas in the northern city on August 16, 2016. (Getty)

Aleppo was “once Syria’s commercial and industrial centre,” says BBC.

Now, it’s “been divided roughly in two since 2012, with the government controlling the west and rebels the east,” said BBC.

The Syrian Observatory for Human Rights says, “The regime’s air and missile strikes, the raids of the Russian warplanes and the fall of shells on Aleppo’s neighborhoods and countryside, have wounded hundreds of people; some of them are still critical situations.”

Al Jazeera says the UN’s special envoy to Syria “has called for a truce again around the city of Aleppo as activists report more deaths in fighting around the country.”

According to the news agency, activists say 33 people died in fighting in Aleppo on Aug. 20 alone, the same day that Ali died in the hospital. The deaths came from battles and airstrikes that “targeted the city’s southern edges,” said the news agency.

Russian airstrikes started in the area last September, says The Huffington Post, describing the area as “besieged” and “nightmarish.”