Amatrice, Italy bore the brunt of a massive earthquake that demolished at least half of the town.

Amatrice “is not here anymore,” the city’s mayor said after the August 24, 2016 quake, which registered 6.2 magnitude (see above for a video city officials posted a few days before the quake of regular life in Amatrice.)

The quake killed at least 278 people throughout central Italy, including an elderly couple whose home collapsed on them, and other people were buried in the rubble. Fifty-three people who died were from Amatrice, said CNN, a heavy toll for the small town.

One little girl, though, was dramatically saved in a nearby town. A drone captured the rescue efforts in Amatrice:

Before the quake caused havoc and destruction, though, Amatrice was known for a famous pasta dish and its 14th century religious landmarks.

1. A Famous Pasta Dish, ‘Amatriciana’ Was Created in Amatrice

A photo on the Amatrice Facebook page. (Facebook/City of Amatrice)

Added the Guardian, “Amatriciana originated in the green pastures on the hills overlooking Amatrice, when shepherds used to bring cheese and pieces of pork jowl with them during long stays away from home and cook them in an iron pan.”

“Most but not all agree that ‘amatriciana’ comes from Amatrice, a tiny town in the mountains bordering Abruzzo about 100 miles from Rome,” says Rome Loft.

There is an Italian stamp devoted to the dish.

The dish was so famous that many cooks for Catholic Popes came from Amatrice. A festival historically celebrates the dish the final Sunday in August. The festival was supposed to be this upcoming weekend and is a tourist draw.

You can find many recipes for it. Here’s one. 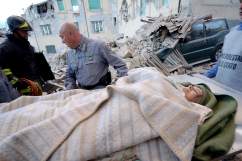 2. Amatrice Is a Very Small Town About an Hour From Rome & Is Built on a ‘Rocky Spur’

Amatrice, Italy’s population was listed as having 1,046 people, and the city is located 65 miles from Rome. See a map of Amatrice.

Italy Magazine says the locals of Amatrice are called amatriciani and the town’s patron Saint is Santa Maria di Filetta. Italy Magazine provides a somewhat larger population for the city of 2,646. CNN put the population at 2,000.

In addition to the pasta, Amatrice is know for a musical instrument called double pipes. The city was “host to an obscure form of zampogna that has two chanters and no drone pipes – perhaps the closest contemporary link to the ancient roman double pipes often seen on carved reliefs in the Vatican Museum,” says iitaly.org (see above).

The site says the pipes accompany sung poetry and regional folk dancing and are used to “escort the bride from her home to the church as part of the traditional Amatrice wedding ceremony.”

Nature lovers also enjoyed the national park and wild orchids around Amatrice. The city’s website says it is “built on the rocky spur above the confluence of the Tronto and Castellano rivers.”

The city has also hosted an elite cycling race.

3. The Spanish Burned Amatrice Down in the 1500s & the City Was Settled in Prehistoric Times

The earthquake isn’t the first time that Amatrice has faced destruction. The city was burned down by the Spanish in 1529 and its “inhabitants fled and sought protection under the Kingdom of Naples,” says deliciousitaly.com.

The town has endured many other conquests, however.

According to amalficoast.com, “The earliest human settlements in the area date back to prehistoric times, a hypothesis confirmed by the discovery of several artifacts from that period. Of the Roman domain remain ruins of some buildings and tombs.”

The site says that, after the fall of the Roman Empire, “even Amatrice experienced the Barbarian invasions and their destructive fury, while with the Lombards it was incorporated into the County of Ascoli. In 1265 the town became part of the Kingdom of Naples and between 1582 and 1692, even though still part of same Kingdom, it passed under the dominion of the Orsini and later, to the Medici of Florence.”

The city’s website says, “In 1271 and in 1274 Charles of Anjou sent armies to defeat the resistance of the amatriciana.” The website says the city was inhabited in pre-Roman times and underwent historic struggles with other towns and castles. To punish a rebellion in the 1500s, “Charles V gave the State of Amatrice in fief to one of his captains, Alessandro Vitelli,” says the city history.

See the more than 1,000 tourist photographs of Amatrice before the destruction. 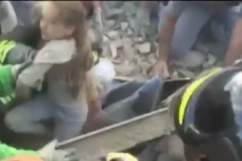 4. The City Was Home to 14th Century Religious Artwork & Churches

A church in Amatrice before the destruction. (Facebook/Amatrice, Italy)

According to visitlazio, Amatrice “is an ancient town, made famous by history and refined by art.”

Amatrice was known for the church of Sant’Agostino at the northeastern end of town, a building “located near a gate in the fourteenth-century city wall,” the site says.

The site says the church contained a “fine rose window and a beautiful, finely sculpted late Gothic entrance door” that dated to 1428, as well as statues of the Archangel Gabriel and the Virgin Annunciate. 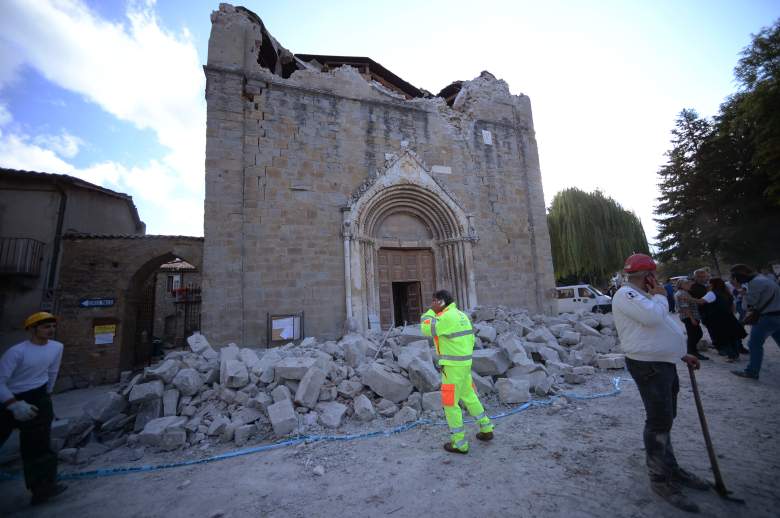 People stand in front of a damaged church in Amatrice on August 24, 2016 after a powerful earthquake rocked central Italy.
The earthquake left 38 people dead and the total is likely to rise, the country’s civil protection unit said in the first official death toll. Scores of buildings were reduced to dusty piles of masonry in communities close to the epicentre of the quake, which had a magnitude of between 6.0 and 6.2, according to monitors. (Getty)

The inside of the church contained “two major paintings representing the Annunciation (1491) and the enthroned Madonna and Child with two Angels (1492), attributed to a painter from the circle of Vittore Crivelli and Pietro Alemanno, called the Master of the Madonna of Mercy.”

The city has other historic churches, including the 14th century San Francesco and “the church of Santa Maria delle Grazie, called the Icona Passatora church, just outside town,” says the site. Amalficoast.com lists six historic churches, a medieval gate, and the Shrine of Our Lady of Threads.

The art of Amatrice, included a fresco in the Church of St Francis, has been turned into posters. The artist Cola d’Amatrice came from the town.

The city’s website says Amatrice had “a wealth of medieval traces in certain churches and parts of the built-up areas: first of all, the monumental Torre Civica (Civic Tower), which despite being raised (1675) and reinforced in the following centuries, had already been mentioned in 1293.”

A few ruins remained “of the ancient walls that once surrounded all of Amatrice,” said the website, adding, that “Evidence of the ancient city walls can be found in a fresco dated 1492, which depicts the Enthroned Madonna holding up the city of Amatrice, in the Icona Passatora church. Along the grid of straight streets there are large and small buildings with quality architecture from the 16th, 17th and 18th Centuries. The most important artistic points of interest are found in the main city and in certain rural sanctuaries and churches in the various hamlets.”

Rescuers search for victims in the rubble after a strong earthquake hit Amatrice on August 24, 2016 (Getty)

Amatrice was at the epicenter of devastation from the August 24, 2016 quake. “The roads in and out of town are cut off. Half the town is gone,” Amatrice mayor Sergio Pirozzi, told RAI state television, according to ABC News. The rescuers dialed people’s cell phones to see who answered, CNN said. 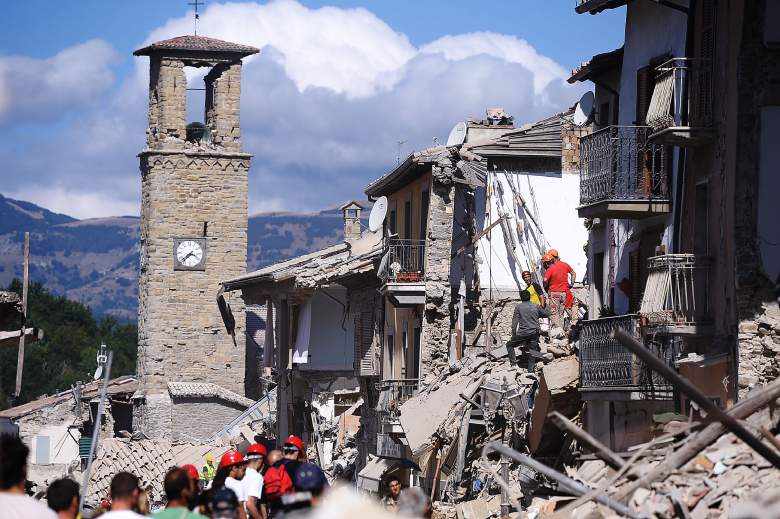 Firemen and rescuers inspect damaged buildings in Amatrice on August 24, 2016 after a powerful earthquake rocked central Italy.
The earthquake left 38 people dead and the total is likely to rise, the country’s civil protection unit said in the first official death toll. Scores of buildings were reduced to dusty piles of masonry in communities close to the epicentre of the pre-dawn quake in a remote area straddling the regions of Umbria, Marche and Lazio. / AFP / FILIPPO MONTEFORTE (Getty)

The iconic Amatrice clock tower was still intact amidst the rubble, and it had stopped at the exact moment the earthquate struck, said CNN.

A man and a little girl were rescued from the rubble:

Later Pirozzi sounded even more dire, according to Reuters, saying, “Three quarters of the town is not there anymore. The aim now is to save as many lives as possible. There are voices under the rubble, we have to save the people there.”

Loading more stories
wpDiscuz
6
0
Would love your thoughts, please comment.x
()
x
| Reply
Amatrice, Italy bore the brunt of the massive earthquake that hit Italy. What is its history and landmarks? It's home to a famous pasta dish, medieval religious art, and more.