A 20-year-old man is accused of shooting two teenagers to death whose bodies were found behind a Roswell, Georgia grocery store.

Jeffrey Hazelwood will be charged with two counts of murder, said WSB-TV Atlanta and a police statement. Police “say they believe Hazelwood acted alone” but weren’t releasing anything about a possible motive, according to WSB-TV.

Teens Natalie Henderson and Carter Davis died from single gunshot wounds to the head. Both were 17.

Their bodies were discovered behind a Publix store in Roswell around 6 a.m. on August 1, WSB reported. The victims’ friends said both were popular students with good grades whose deaths had shocked the tight-knit Georgia community, which is Georgia’s eighth largest city, Visit Roswell says.

1. Hazelwood Had a Knife Collection, Lived With His Grandparents & Dressed Like ‘Dylan Klebold,’ A Close Friend Says

Colin Nelson, who told Heavy he had known Hazelwood since 3rd grade and hung out with him in recent months, said Hazelwood would dress all in black and wear camouflage pants, leading Nelson to joke to Hazelwood, “You look like Dylan Klebold,” referring to the Columbine school shooter. Nelson said that Hazelwood responded, “Oh, shut up, man.”

Nelson, who is Facebook friends with Hazelwood and recently wrote on his wall, told Heavy that they were in Boy Scouts together in elementary school, and the friendship continued. On Facebook, Nelson had written in January on Hazelwood’s page, “Bro, we need to hang out!” to which Hazelwood wrote back, “Yeah totally!”

Nelson said that Hazelwood worked at a local craft store and hung out at the Waffle House. He said Hazelwood was “into knives” and “had a shotgun.” He said, “I felt bad for him and I would hang out with him at Waffle House and Army/Navy store.”

“I have no idea what happened, but that son of a (expletive) is crazy,” said Nelson, who said he personally witnessed Hazelwood talking about drugs to a high school student. Police have not released any details on a possible motive.

He said of Hazelwood: “We had talked about trying to get him into the National Guard, and he has been off his meds for three weeks already, and I don’t think he ever got back on it. We talked about things. He would hear people talk. He’s been to mental hospitals a couple of times.”

Asked how he knew those things, Nelson said that Hazelwood had told them to him directly and that the conversation occurred in June when Nelson returned from military boot camp. He also said that he had called the Roswell police to share the information and was being interviewed by a detective on Thursday.

Nelson said that he contacted police because he respects law enforcement. “I am in grieving for the families involved,” he said. He said that Hazelwood lived a “troubled” life and was raised by his grandparents, adding, “His grandparents, I’m sad for them. They were really religious and they really tried. I’m not shocked; he’s crazy.”

A photo that Jeffrey Hazelwood posted on Facebook. In the hours immediately after his arrest, police were not saying much about a possible motive. (Facebook/Jeffrey Hazelwood)

“He was into knives,” said Nelson. “He would be like, ‘Look at my knives.’” Nelson said that Hazelwood had just gotten his GED a few months ago and Nelson encouraged him to enroll in a tech school.

He claimed, “He sold drugs to high schools. That’s what losers do; they sell drugs to high schools.” He said he had seen “weed” in the console of Hazelwood’s car. Asked how he knew all of this, he said, “I was stupid. He said, ‘Do you want to go to high school,’ and he was over there talking about drugs.” Nelson said he didn’t want anything to do with drugs and did not get involved.

However, the police spokesman told People Magazine that police “have no reason to believe that drugs are involved” in the murders. Hazelwood had to criminal record but had previous encounters with police they wouldn’t detail, People said.

The Atlanta Journal Constitution also said that Hazelwood was raised by his grandparents, who enrolled him in an Alternative Youth Academy in Roswell.

Julio Avendaño, now 21, knew Hazelwood there and told the newspaper, that Hazelwood didn’t seem normal: “You could feel he was strange when you stood next to him.” He added that Hazelwood was smart but a loner and that his grandmother would bring baked goods to school.

CBS News said that Hazelwood acted bizarrely in court when he appeared on charges he murdered the teens; he talked to himself, shook his legs and hands, and appeared to pet an imaginary dog, said CBS.

2. Hazelwood Posted Graphics on Facebook About Madness & He Was Arrested After a Search Warrant Was Executed at a Local Home, Reports Say 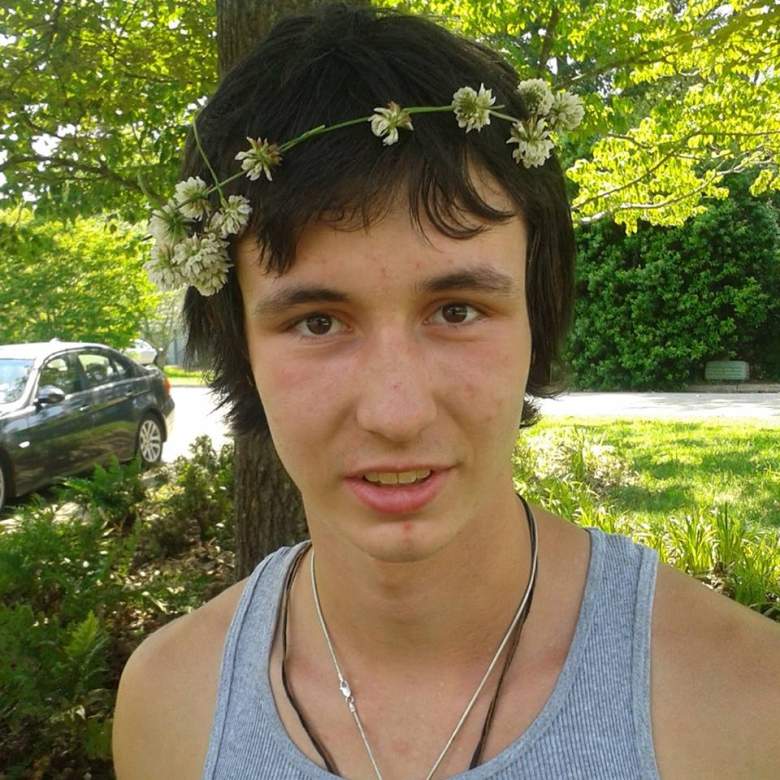 Hazelwood’s arrest came after police executed a search warrant on Aug. 3 at an area home. Neighbors said the people in the home had lived there since the 1980s, according to WXIA.

The suspect’s Facebook page says he is in a relationship with a Roswell, Georgia woman. On Facebook, he posted graphics and photos of wolves, a rose, and quotes from Alice in Wonderland referring to madness.

Other graphics he posted said things like: “Forgive me for not being all there, my mind has found a place called ELSEWHERE” and “We must take adventures in order to know where we truly belong.” He also posted memes about magic, including one that said, “Magic is all around, you just have to believe.”

Several of the pieces of artwork on his social media page featured guns. In one, two chicks hold weapons. In another, a man playing poker with a burning card of hands has a gun.

One of the memes that Jeffrey Hazelwood posted on Facebook.

One graphic on his page says, “Have I gone MAD? I’m afraid so… you’re entirely BONKERS, But I’ll tell you a secret. All of the best people are! – Alice in Wonderland.”

The Journal Constitution said a social media post from Hazelwood 17 weeks ago said: “Why the (expletive) should i live? Cant do (expletive) right. All i do is hurt everybody even the one i love more than my own life and i swore to never hurt. Im beyond (expletive). Theres no one left.”

According to Roswell Patch, “A preliminary investigation had found that the two victims ‘are teenagers from the area and each suffered head trauma,'” said Roswell police spokesperson Zachary Frommer.

A police statement says the same. It was later revealed that they each died from gunshot wounds to the head.

A police statement said Hazelwood “will subsequently be charged with two counts of Murder. He is currently at the Roswell Detention Center and will be transferred to the Fulton County Jail. For safety reasons, the time of transfer will not be disclosed.”

Police had said the bodies were found by two vehicles, indicating the victims drove to the grocery store. 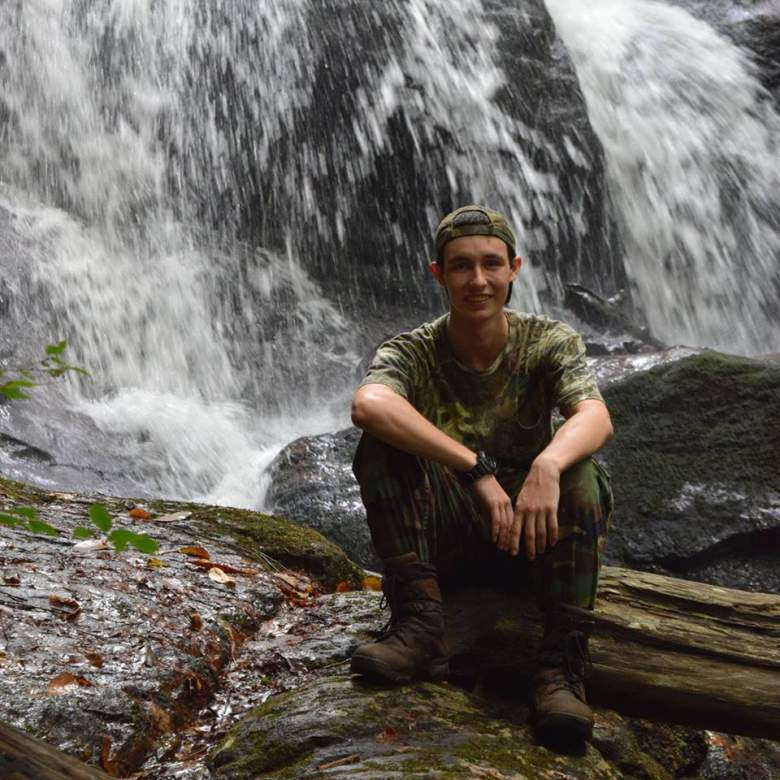 According to the Atlanta Journal Constitution, police say Hazelwood tried to use Henderson’s debit card after the murders at a Roswell convenience store.

Police said they “were able to place the cellphone” of Hazelwood both at the murder scene and at the convenience store, the newspaper said. On Aug. 4, police released a photo of Hazelwood’s silver Honda Passport SUV, “asking anyone who has seen the vehicle to contact them,” CBS said.

Police investigated the crime by speaking to local employees and reviewing surveillance video to try to figure out what happened to the teens, according to The Journal Constitution.

In a statement released Aug. 3, Roswell police said: “Since the discovery of the victims, investigators have been collecting evidence, reviewing surveillance footage, and speaking with anyone who may be able to contribute information. This work led to the identification of Hazelwood as a suspect. Detectives located Hazelwood early this morning and he was questioned at the Roswell Police Department.”

4. Davis Played Lacrosse & Was Remembered as a Promising Athlete

Carter Davis, you had a special spot on this team and as my friend. This season is for you bud. Rest in peace #4 pic.twitter.com/OUDYUK1lUe

The 6 foot, 180-pound Davis wrote on a lacrosse recruiting website, “I love lacrosse: the fast pace, the quick moves, and the teammates, and I hope to play lacrosse in college.” Davis was involved in the Fellowship of Christian Athletes.

Davis said that he loved challenges and wanted “a school that offers an engineering program. I have also played football for the past three years in high school.” He was described as a top tier athlete.

Fox 5 said it was supposed to be Davis’ first day of school; instead, fellow students prayed around the goalpost.

Darren John, a former coach of Davis’ who is now a meteorologist and reporter, wrote on Facebook: “I had the pleasure of coaching this young man for a couple of years. On our team he was known as ‘Georgia.’ He had a raw talent for the sport of lacrosse and was on his way to playing in college. He will always be with us when we take the field.”

Christopher Hofmann, a high school friend, told Heavy of Davis, “Carter was known at RRHS for his personality and for his lacrosse.” Hoffman told Heavy that Hazelwood “went to the same waffle house” but beyond that, “I’ve never seen or met him.”

The police statement said, “The families involved have requested privacy.”

Zach Papoutsis, a friend of Davis, said that friends are baffled how someone could have killed both Davis and Henderson with head trauma in part because of Davis’ strength. Papoutsis was in a weight lifting class with Davis and said the community is generally safe.

Papoutsis said that Davis was “very outgoing. He was someone whose smile would light up the room. He was an incredibly hard worker and a friend to everyone.”

The Journal-Constitution says that a delivery driver found the bodies behind the grocery store on Woodstock Road. 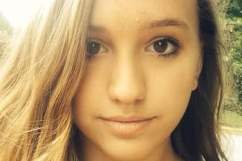 5. Henderson Was in the School Color Guard & Posted a Video of Herself Singing

Henderson, who was in her high school’s color guard, was remembered by her high school band director as a “fun, smart, talented young woman who was loved by so many.”

In her obituary, she was described as “smart, funny, sassy, and strong, a free spirit with a gorgeous smile that could make your day or your week.”

The obituary said Henderson was a leader in the award-winning Color Guard of the Roswell High School Band, a life guard for Swim Atlanta, a talented singer, a guitar player, and a lover of animals who volunteered countless hours to animal rescue.

“Natalie had a loving heart and an infectious zest for life,” said the obituary. “Unusual for one so young, she had the courage to always be, unapologetically, herself. Natalie will forever be loved and missed by all whose lives she touched.”

Maddy Black, who was friends with Henderson in middle school, told Heavy that Henderson was a good person: “She was a great friend…. She was always kind to me.”

Henderson had posted a video of herself singing on social media, writing, according to WSB-TV: “I can’t live without music. Try to live life to the fullest.”

Zach Papoutsis, another high school friend of Davis’, told Heavy he had heard that Henderson was also a good student. He said friends believe the two were not dating but were “hanging out.” Although the two went to different high schools, Papoutsis said the schools are within 10 miles of each other. Papoutsis works at the Publix behind which the bodies were found.

Papoutsis said that Davis “started varsity football and was one of the top tier athletes at our school.” One woman wrote on Facebook about the deaths, “Please say a prayer for the families of these children.” She added that Carter played football and said, “This is so tragic!”