Joseph Corrao is accused of attacking Pinky the flamingo, seen here in an undated photo at Busch Gardens in Tampa Bay, Florida. The bird had to be euthanized because of the serious injuries she suffered, Busch Gardens officials say. (Tampa Police Department/Busch Gardens)

A beloved flamingo suffered traumatic injuries and had to be euthanized after she was attacked by a man at the Busch Gardens amusement park Tuesday in Tampa Bay, Florida, authorities say.

Joseph Anthony Corrao, 45, is accused of animal cruelty in the death of Pinky, a popular Chilean flamingo, the Tampa Bay Times reports.

1. Witnesses Say Corrao Picked Up the Flamingo & Threw Her Down ‘in a Rage’ After His Mother Yelled at Him

Joseph Corrao was at Busch Gardens with his family Tuesday night when witnesses said he attacked the 19-year-old flamingo at the Jambo Junction animal viewing area, the Tampa Bay Times reports.

Witnesses told WFTS-TV that Corrao reached into the flamingo pen and picked up the flamingo before throwing it down “in a rage.”

During a court appearance Wednesday, a judge said it was Corrao’s mother who yelled for him to drop the bird after he picked it up, WTVT-TV reports.

“You reached your hand inside the animal pen, it’s alleged you picked up a flamingo that was in there, which you had no legal right to do, apparently your mother yelled for you to put the bird down, and according to multiple witnesses – one, two, three, four, five different witnesses – you threw the bird down with such force that the bird’s foot was nearly severed,” the judge told Corrao.

Corrao was detained by Busch Gardens security and then taken into custody by Tampa police.

Pinky was taken to the amusement park’s Animal Treatment Center, where veterinarians made the decision to humanely put her down because of the severity of the injuries, WFTS reports.

2. Corrao, Who Has a Lengthy Criminal Record, Posted ‘Ive Never Been to Jail in Tampa’ on Facebook a Day Before the Attack

Corrao in a mugshot taken after he was arrested in 2012. (Columbia County Sheriff’s Office)

Corrao has a lengthy criminal record, according to online court records.

He has served about three years in prison on convictions that include aggravated assault on a person 65 years or older, felony DUI and fleeing law enforcement, the Tampa Bay Times reports. Corrao was released from prison last year after serving about a year.

According to the Times, Corrao posted on Facebook on Monday about his upcoming trip to Tampa. His Facebook page was deleted Wednesday.

Corrao wrote that he would be going to a Tampa Bay Rays baseball game with his two sons, and would be in box seats with “all u can drink and eat free,” adding, “i will be tepsy tonight.”

The Times says that after Facebook friends told Corrao to “behave himself” and “make a good impression” for his kids, Corrao wrote, “I’ve never been to jail in Tampa.”

3. The Flamingo Was One of the Most Popular Animals at Busch Gardens & Made Public Appearances Around the Area

The slain flamingo was one of the more popular animals at Busch Gardens.

“Pinky was a beloved member of the Busch Gardens Tampa Bay family and made many appearances on behalf of the park’s conservation and education efforts,” the park said in a statement. “She will be sorely missed.”

Pinky was hatched at the park in 1996. She was an ambassador animal for them, the Tampa Bay Times reports. Theme park enthusiast and writer Bill Androckitis told the Times that the flamingos in the Jambo Junction pen are able to approach people.

“But usually if you put your hand out, they’ll run away,” he told the newspaper. He said Pinky isn’t fearful of humans because of her role as an ambassador. “Likely, it wasn’t an issue for her to be approached. But I just can’t, I don’t understand. To do that to any animal in the wild or in Busch Gardens is a despicable thing.”

4. Pinky Was Known at Busch Gardens for Her Flamenco Dancing Routines

Pinky was a star at Busch Gardens because of her flamenco dancing routines. You can watch video of her dancing above.

“Pinky loved to dance for our guests,” park spokesperson Karen Varga-Sinka told WTVT-TV. “Her keepers say that this is not a trained behavior, but a natural behavior she loved to show off. Flamingos are filter feeders, using their beaks to strain tasty morsels out of the water around them as they wade. To stir up the tastiest treats, flamingos will stamp their webbed feet. Pinky often performed this toe-tapping behavior out of the water for guests.”

Varga-Sinka said Pinky was one of about 20 flamingos at the park.

5. A Judge Said Corrao’s Action ‘Bordered on Depraved’ During His First Court Appearance

Corrao was charged with aggravated cruelty to animals, a third-degree felony, according to Hillsborough County court records. He faces up to five years in prison and a fine of up to $10,000 if convicted.

He appeared in court for the first time Wednesday morning, and a judge told him the crime he is accused of is “beyond senseless,” WTVT-TV reports.

“It actually borders on depraved,” the judge said, according to WTVT. “Mr. Corrao, I don’t know if you have other issues. I don’t know who does that, I really don’t. I don’t relate to that on any level.”

During his court appearance, prosecutors said Corrao had served six years in the Army and relies on Social Security disability benefits, the news station reports. 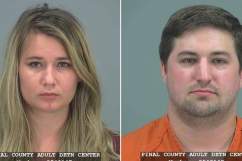 Loading more stories
wpDiscuz
239
0
Would love your thoughts, please comment.x
()
x
| Reply
Joseph Anthony Corrao, 45, is accused of attacking Pinky the flamingo at Busch Gardens in Tampa Bay, Florida. The flamingo had to be euthanized.