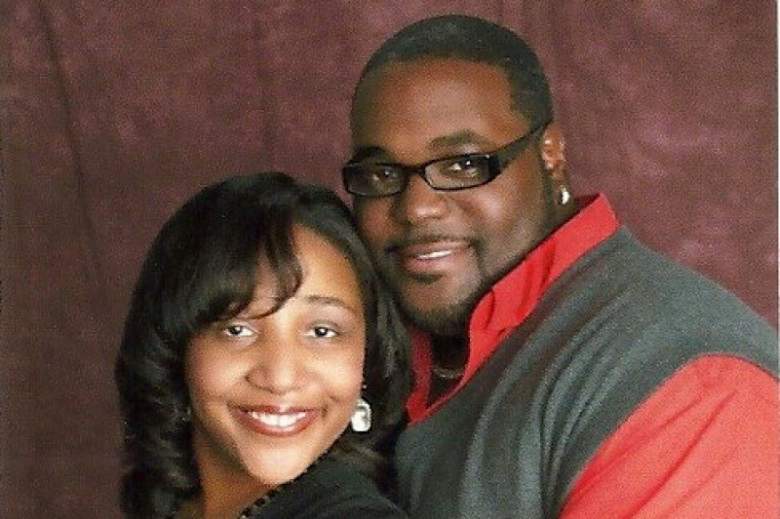 Kimberly V. Bracey and her husband, Santore. (Go Fund Me)

Kimberly V. Bracey is suing the mayor of Jackson, Mississippi after accusing him of firing her after she ended an alleged affair with him.

Bracey alleged sexual harassment by Mayor Tony Yarber in a federal lawsuit she filed August 25, according to The Associated Press. The lawsuit contains dramatic allegations involving strippers in body paint and other women.

She was Yarber’s former executive assistant, said The AP. The Clarion-Ledger says the city released a statement that called the allegations “frivolous.”

“When appropriate, the City of Jackson, Mayor Tony T. Yarber, and City personnel will seek all available remedies against Mrs. Bracey and possibly others, for this egregious character assassination and political ploy,” the statement says, according to the newspaper.

1. Bracey Says She Was Living With the City Attorney When the Alleged Affair Started & Her Husband Suffered Kidney Failure Afterwards

Hear from city attorney Monica Joiner on what it's like on the job http://t.co/9FqJ1T25KN pic.twitter.com/d12dEdtLqr

In May 2014, Bracey says she separated from her husband and moved in with Monica Joiner, who is the city attorney for the City of Jackson, Mississippi, the lawsuit contends.

“During this time Defendant Tony Yarber engaged in a sexual relationship with Plaintiff,” says the lawsuit. 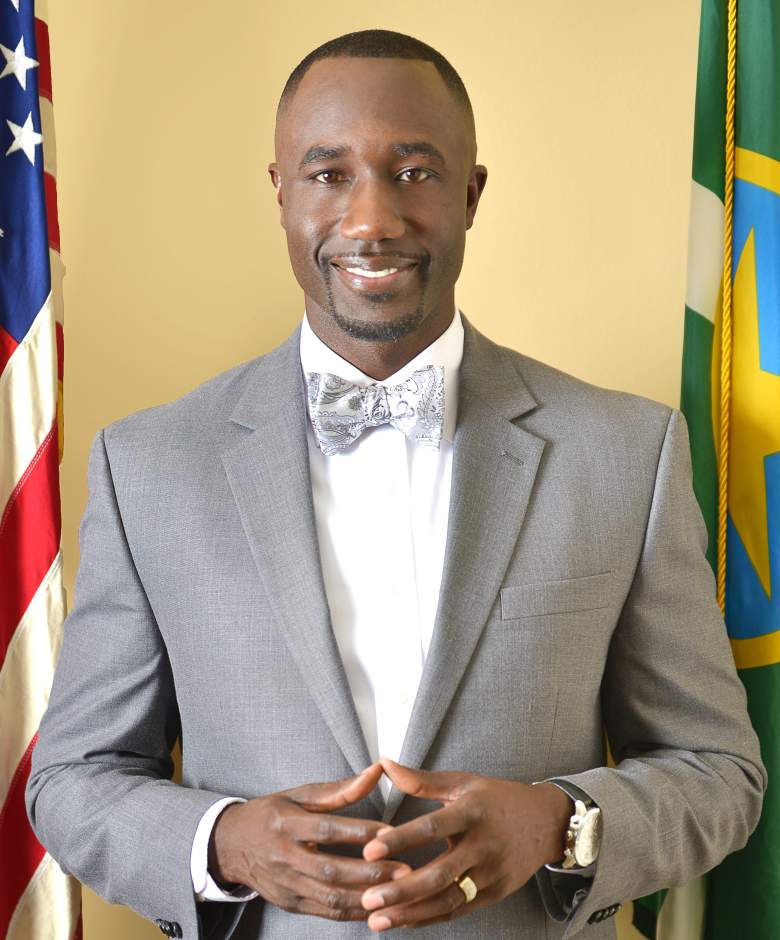 According to a Go Fund Me site for Bracey’s husband, Santore, in October 2015, Santore was “diagnosed with kidney failure and has undergone 5 surgeries since then. He has been hospitalized overnight on several occasions causing him to be unable to be employed because of his disability. His wife has had to be his caregiver and oversees a nonprofit that assist caregivers like herself.”

In an article describing her caregiving business, Aunt Joyce’s Kids, Bracey wrote, “In 2009, I became a single mother of three children, one of which was diagnosed with ADHD, ODD, an anxiety disorder and dyslexia, and he is currently being screened for Asperger’s Syndrome. I had to take off from work to go to tons of screenings and therapy, and also had to leave work following my spouse’s diagnosis of kidney failure.”

2. Bracey Accuses the Mayor of Pursuing Other Women, the Lawsuit Alleges & the Mayor Officiated at Her Wedding to Another Political Candidate

Bracey contends she “was also aware that Defendant Yarber engaged in numerous sexual relationships with other women during this time,” the lawsuit alleges.

She told the Clarion-Ledger that Yarber and her husband were friends and that the mayor officiated at their wedding. Bracey is married to Santore Bracey, who ran unsuccessfully for Hinds County Tax Collector, says the newspaper.

According to Mississippi News Now, “several unnamed ‘John Doe’ defendants have also come forward with claims against the Mayor. They are believed to be employees of the City of Jackson.”

3. Bracey Says the Mayor Allegedly Retaliated When She Cut Off the Affair & That She Was ‘Falsely’ Accused of Using City Equipment For Her Husband’s Campaign

According to the lawsuit, Bracey claims she reconciled with her husband and moved back into the family home in July 2014. She says she “ended her consensual relationship with Defendant Yarber,” the lawsuit contends.

The lawsuit alleges that “in response Defendant Yarber transferred Plaintiff to be supervised by other staff members. Around this same time Defendant Yarber began forcing Plaintiff to continue the sexual relationship by making it clear that she could be terminated if she did not have sex with him. Plaintiff was the sole source of income for her family at this time.”

Bracey says that on April 2015, after she ended the relationship, Yarber “falsely accused” her of “unauthorized use of city equipment for personal use.” She says in the lawsuit that she was threatened with termination and placed under supervision. On April 27, 2015, Mayor Yarber “abruptly terminated” her, she said. She claims that city employees they accessed her private email account to “falsely claim” she had printed a flyer for her husband’s

4. The Lawsuit Alleges the Mayor Went to a New Orleans Strip Club & Was at Event Where Strippers Wore Body Paint

In May or June 2014, Bracey was “required to attend a fundraiser” in New Orleans, Louisia, the lawsuit alleges. A campaign contributor for Yarber hosted a dinner at a restaurant in New Orleans where numerous city staff members were in attendance, says the lawsuit.

Later that evening, Bracey, Yarber, the campaign donor and others met at a strip club where the campaign donor allegedly “paid for everything,” contends the lawsuit, adding that Bracey and another man “were required to watch the door where Mayor Yarber and one of the strippers went into to be alone.”

In August 2014, Bracey said she attended another fundraiser for Yarber in Atlanta, Georgia. They were “greeted by strippers wearing only body paint,” she alleges.

On another occasion, she says that a campaign donor “arranged for a woman to have a sexual relationship with Yarber.”

5. Yarber Is a Married Father of Three & a Pastor Who Wrote About Cheating on His Wife in a Book

Mayor Yarber’s wife, Rosalind, wrote under this photo on his campaign Facebook page, “”Faith is an action word. It requires us to work, to do something. Do something today by voting Tony Yarber for Mayor of the City of Jackson.”

According to his official city biography, Tony T. Yarber was born on March 17, 1978, in Jackson, Mississippi.

“He is a pastor, educator, author, and transformational leader that has committed his life to public service,” the bio says.

He was a city councilman first for the City of Jackson and then, in April 2014, “became the youngest mayor elected in the capital city of Mississippi,” says the bio.

He is married to Rosalind Neal Yarber and the father of three amazing children: Carmen, Cameron, and Toni Michelle, his biography says.

On Yarber’s campaign Facebook page, Rosalind Yarber wrote in April 2014, “‘Your life is your testimony’ is what I tell anyone who has ever faced disappointments in life. Our plans do not always line up with His plan for us. And because He loves us, He allows us to go through challenges that shape and mold us into the awesomeness that He always knew we were. Oftentimes, you hear Tony referring to me as ‘the wife he does not deserve.’ (I agree…lol) However, I have not always made the best choices or did the right thing; Tony loved me through it all. Neyo has a song that states ‘I’m a movement by myself but I’m a force when we’re together…..you make me better.’ This describes my relationship/friendship with Tony. Great people make other people realize that they too are great! So, who deserves whom?”

Mayor Yarber wrote about cheating on his wife in a book, says The Clarion-Ledger. The book is called “Man Tips,” and the blurb for it reads, “Man Tips is a great how-to on understanding women’s wants, needs, and desires. Many have tried to figure out the mystery. Some have done it successfully, while others have left feeling even more confused. In Man Tips: What She Wants You to Know, Tony T. Yarber shares his own experience, as well as insight gained from the Christian counseling service he runs with his wife. He speaks directly to men in an honest way to help them tune in to their relationships and connect with their women.”

Read More
5 Fast Facts, Breaking News, Mississippi, Politics
Follow Heavy ↓
Kimberly V. Bracey alleges in a lawsuit that Jackson, Mississippi Mayor Tony Yarber subjected her to sexual harassment and fired her after she ended an affair with him.