Kodi Gaines, the 5-year-old son of Korryn Gaines, was recorded by a family member in his hospital bed Thursday, talking about the police shooting that left his mother dead and him wounded.

The video was posted to Instagram by Gaines’ cousin, who has since made her account private. Baltimore BLOC, a local community group, combined the series of videos and posted the full footage to Youtube. You can watch it above.

Korryn Gaines was killed by police in Baltimore County, Maryland, after a standoff that lasted several hours at her apartment in Randallstown.

The boy was shot by a Baltimore County police tactical officer, police said in a press release Friday.

“As a result of an additional medical procedure performed today at Johns Hopkins Children’s Center, Baltimore County Police believe that a round fired by a tactical officer struck Kodi Gaines, the five-year-old who suffered non life-threatening injuries in Monday’s police-involved shooting in Randallstown,” police said. “Additional forensics tests will be conducted on the recovered round. The injury is to the left cheek.”

According to police, officers went to Gaines’ apartment Monday morning to serve warrants against her and her boyfriend. She was wanted for failure to appear in court on several charges stemming from a March traffic stop,. Her boyfriend was wanted on a second-degree assault related to a previous domestic incident in which Korryn Gaines was the victim, police said.

When police arrived at Gaines’ home, they said they saw her with a shotgun. Her boyfriend, Kareem Kiean Courtney, 39, ran out of the home with a 1-year-old boy and was taken into custody. Gaines barricaded herself in the apartment with Kodi, police said. After several hours, police said Gaines threatened to shoot an officer, who fired at her once. Police said she returned fire and officers shot at her a second time, killing her. You can read more about the shooting and Korryn Gaines here.

In the Instagram videos posted on Thursday, Kodi Gaines talked about what he remembers from the shooting.

“The police kicked the door down,” Kodi says. He was hiding in the closet when that happened. He says he then came out of the closet with his mother.

“I was sitting next to my mother and then we were sitting out there, and then the police didn’t want us to go to our rooms,” Kodi says. He says Kareem, meaning Gaines’ boyfriend, Kareem Courtney, left the apartment with the other boy, but Kodi said he wanted to stay with his mom, even though Kareem wanted him to go.

Kodi talked about the moments before the shooting.

“My mother said back off, so the police said please back up, and then they started shooting,” Kodi says. “And then the police just took me. … They saw me run and they hurt my arm.”

When asked if they shot him on purpose, Kodi answers, “yes. The end.” 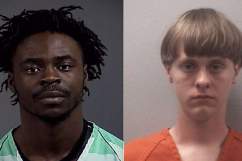 Loading more stories
wpDiscuz
31
0
Would love your thoughts, please comment.x
()
x
| Reply
Kodi Gaines, the son of Korryn Gaines, was recorded in his hospital bed talking about the police shooting of his mother. Watch the full video here.