A screenshot from the Sam Macon video on Twitter showing the man in a Zorro costume being detained. (Twitter)

One of the most bizarre videos to circulate on social media during the LAX panic showed a man in a supposed “Zorro” costume being surrounded by shouting police.

However, it turns out that the account is true. The LAX Airport official Twitter page confirmed that a man dressed as “Zorro” was detained in the wake of the mass pandemonium that erupted at the Los Angeles airport on August 28.

Individual in Zorro costume has been detained by @LAAirportPD

CBS Los Angeles managed to interview the man and reported he was “an actor coming from an audition. Officials later said the man didn’t have time to change out of his costume.” The station said the man was too embarrassed to show his face on camera and he said he was making a phone call and waiting for a ride when “the next thing I know, LAPD is all over me…For whatever reason.” LA television reported he said he was detained and released.

People fled the airport in panic after reports of an “active shooter,” but police have now determined that those reports were false. They say “loud noises” caused the panic, but they aren’t sure what the loud noises were.

One Twitter user managed to capture the scene as police shouted and swarmed around the man, whose “Zorro” like hat can be glimpsed on the video, although it’s too far away for a good look at his purported costume. The Twitter user, a writer and photographer by the name of Sam Macon, wrote, “Before things got really crazy – a man in a Zorro costume with a plastic sword was arrested.”

It’s not clear whether the detainment of the man in the costume had anything to do with the mass panic, which grounded airplanes and sent people fleeing outside.

Watch the CBS interview with the man here:

One man claimed to have spotted “Zorro” or at least a guy dressed kind of like him. It was not clear whether this was the same man, though.

Although police said there was no evidence of an active shooter and no injuries, the panic caused major headaches for travelers, who reported on social media that they had fled the airport, were trapped on planes, were stuck in massive crowds waiting to go back through security, or were lying face down on airport floors.

It was clear that people thought there was an active shooter or might be; some terrified travelers fled so fast that they left their belongings strewn around the airport. Some on Twitter posted photos showing travelers crowding outside on the tarmac and the FAA grounded air transportation to LAX as the situation unfolded, said CNN.

The “Zorro” at the airport account sparked immediate jokes and memes on Twitter. A man in a costume? Well, Hollywood is nearby after all.

Be on the lookout! Suspect’s getaway transportation may have been a white mustang. pic.twitter.com/RU9Pb6zxam

LAX evacuated because of a man in a frickin' Zorro costume. This country is going down the tubes. https://t.co/5OM94LcWxg

I feel so sorry for LAX Zorro dude, but also happy the situation didn't get any worse. Way to handle it, LAPD

So a guy dressed as Zorro was the cause of the chaos at LAX. I think it's official; our country is now a real Zucker Bros film 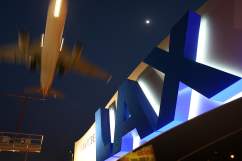 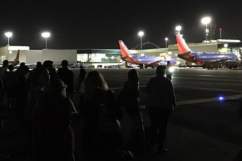 Loading more stories
wpDiscuz
6
0
Would love your thoughts, please comment.x
()
x
| Reply
The LAX Airport says a man in a Zorro costume was detained amidst the panic over false reports of an active shooter. See the video and memes.