Maine Governor Paul LePage left an expletive-filled voicemail for State Representative Drew Gattine, calling the Democrat a “c**ksucker” and daring him to prove that he is racist. LePage ended the 35-second message by telling Gattine to make the message public, which is exactly what he did.

The uncensored version of the message was published by the Portland Press Herald. In it, LePage tells Gattine:

Mr. Gattine, this is Gov. Paul Richard LePage. I would like to talk to you about your comments about my being a racist, you c**ksucker. I want to talk to you. I want you to prove that I’m a racist. I’ve spent my life helping black people and you little son of a b**ch, socialist c**ksucker. You — I need you to — just friggin’. I want you to record this and make it public because I am after you. Thank you.

According to the Press Herald, LePage’s tirade came after a television reporter asked him what his response would be to those who consider him a racist. The reporter said he spoke with Gattine, but Gattine didn’t call LePage a racist. Gattine also denied calling the governor racist. But Gattine told the Press Herald that the message was “upsetting, inappropriate and uncalled for.”

LePage has issued an apology. Here’s his complete statement:

“When someone calls me a racist, I take it very seriously. I didn’t know Drew Gattine from a hole in the wall until yesterday. It made me enormously angry when a TV reporter asked me for my reaction about Gattine calling me a racist. It is the absolute worst, most vile thing you can call a person. So I called Gattine and used the worst word I could think of. I apologize for that to the people of Maine, but I make no apology for trying to end the drug epidemic that is ravaging our state. Legislators like Gattine would rather be politically correct and protect ruthless drug dealers than work with me to stop this crisis that is killing five Mainers a week.”

“When I said I was going after Gattine, I meant I would do everything I could to see that he and his agenda is defeated politically. I am a history buff, and I referenced how political opponents used to call each other out in the 1820s—including Andrew Jackson, the father of the Democratic Party. Obviously, it is illegal today; it was simply a metaphor and I meant no physical harm to Gattine. But I am calling him out to stop giving inflammatory sound bites and get to work to end this crisis that is killing Mainers, destroying families and creating drug-addicted babies, all so the drug dealers Gattine is protecting can make a profit.” 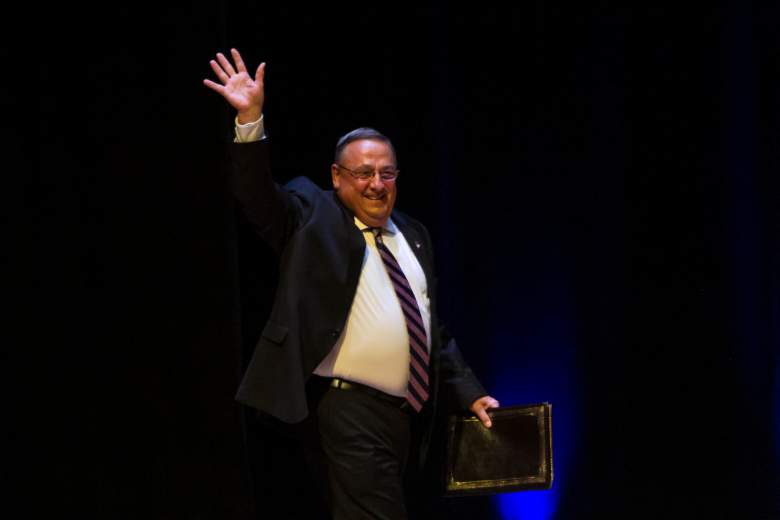 LePage at a rally for Donald Trump. LePage has been a vocal supporter of Trump. (Getty)

The message was left just days after the Press Herald reported that LePage defended his January comments about drug dealers by saying that 90 percent of those arrested on drug charges in Maine are Hispanic or African-American.

“If I am a racist for trying to get black people and Hispanic people and white people and Asian people who come up [Interstate] 95 with heroin that will kill Mainers, then I plead guilty,” LePage told WTMV on Thursday.

“It’s inconsequential to me what the race is of people coming here, solving these crimes,” Gattine told WTMV. “I don’t why we want to think about it talk about it in those terms.”

“Then there’s the all mighty powerful ones like Mr. Khan — which is a con artist himself, and he uses the death of his son, who’s an American soldier, which we respect and honor, and he uses that to go after Trump, which I found very distasteful,” LePage told radio host Howie Carr. 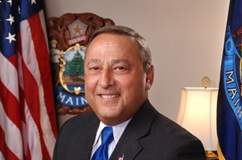 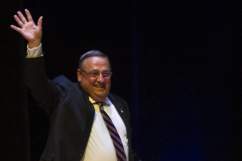