The mass shooting on June 12 at Pulse Nightclub in Orlando, Florida, was the worst mass shooting in United States history and news of the tragedy that was heard across the entire world.

49 people were killed and 53 were wounded in the attack by a lone gunman, Omar Mateen, after a 3-hour standoff.

The sheriff’s office was forced to take overflow 911 calls when Orlando Police Department dispatchers were inundated during the attack. In the recordings you can hear sheriff’s dispatchers getting mostly busy signals when they tried transferring calls back to police. The gut-wrenching 911 calls have been released. You can listen to the calls below:

In the 911 call that you can listen to below, a man says “I don’t hear any gunshots now but,” before being transferred. The 911 operator continually tries to transfer the caller, but keeps getting a busy signal. She then asks the caller, “What’s going on there?” “I ran to my car so I’m pretty much on the side…there’s a whole bunch of cops right now,” he replied. “How many shots did you hear?,” the operator asks. “More than 10 for sure…as soon as we heard that we ran,” he said.

The caller then says that he was able to safely leave the building by running after the shots were fired.

In the absolutely heartbreaking audio below, a caller who’s in tears tells a 911 operator that his friend has been shot. “My son was shot in the club, in The Pulse in Orlando. He’s still in the bathroom. But he’s bleeding…he got shot, and nobody is going in for him,” he said. He tells the 911 operator that he wasn’t sure which bathroom his son was in. Later in the call he asks if the woman answering the call knows if anyone was killed, to which she replies she does not. Listen below:

In the following call, a man is audibly frightened for the life of his girlfriend. “My girlfriend is in the bathroom, there are now 4 dead in the bathroom and 2 shot who are bleeding out,” he said. He is upset because it’s the “fifth time” he tried calling:

In the next call, a woman whose brother is in a bathroom at Pulse calls 911. She said there were four dead already and “a lot” wounded at the time of the call. The operator tries calming her by saying police are doing everything possible:

A man tells a 911 operator that his girlfriend is stuck in a bathroom at Pulse in the call below. At the time of his call he thought two were dead by what his girlfriend had texted him. “She’s texting me because she’s afraid that whoever is in there shooting people is gonna hear them,” he said. Later he said she texted him, “The shooters are here.” At this point it was not known there was only one gunman wrecking havoc and causing all of the terror at the club:

You can listen to more of the calls here. 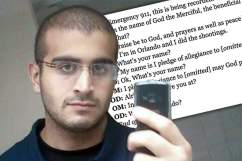 Loading more stories
wpDiscuz
1
0
Would love your thoughts, please comment.x
()
x
| Reply
911 recordings from the Pulse Nightclub mass shooting in June have been released. You can listen to the heartbreaking calls here.