Hillary Clinton and Donald Trump will both spend time this week in Ohio— a critical swing state.

Each candidate is speaking at the American Legion’s 98th national convention at the Duke Energy Convention Center. Taking place Aug. 26 through Sept. 1, the nonpartisan veterans service organization invites candidates from the two major parties to address its members every presidential cycle.

Clinton will address the convention on Aug. 31, and Trump is scheduled to speak on Sept. 1. About 9,000 veterans, family members and guests are expected to attend the convention.

The former secretary of state is scheduled to speak at 12 p.m. ET. Clinton plans to “make the case for American exceptionalism,” according to the New York Times.

Clinton was most recently in Cincinnati on July 18, when she spoke to delegates of the NAACP national convention at the Duke Energy Convention Center. 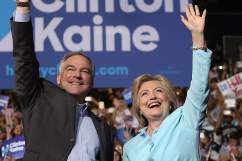 When & Where Is Hillary Clinton’s Next Rally