Maylin Reynoso was a 20-year-old woman from New York whose death some are comparing to those of murdered joggers Karina Vetrano and Vanessa Marcotte.

On Twitter, the hashtag #MaylinReynoso is sometimes used by people commenting on the deaths of the murdered joggers. Some accuse the news media, police, and community of bias because Vetrano’s death, especially, has received more media attention than that of Reynoso, who disappeared just days before.

rest in peace #MaylinReynoso ? I'm sorry you didnt get the media attention you deserve, maybe this could've been avoided if you did

“When a Latina woman goes missing, no one bats an eye,” said Vibe Magazine. Reynoso was Dominican.

Reynoso’s body was found in the Harlem River in Manhattan in late July, said Ensegundos, a Spanish-language publication. Vetrano and Marcotte were murdered the first week of August, Vetrano in Queens, and Marcotte, who was a Google employee from New York, in Massachusetts.

However, there are also significant differences between the cases; mainly, in Reynoso’s death, the cause of death is unclear, whereas police say the deaths of Vetrano and Marcotte are definitely homicide.

“At this point, the medical examiner has yet to determine the cause of death,” The New York Police Department told Heavy on August 23 of Reynoso’s death. “The investigation remains open and active.”

1. Reynoso Disappeared in July & Her Body Was Found Three Days Later but the Cause of Death Is Unclear

Ensegundos, the Spanish-language publication, reports, “The researchers do not rule out suicide” or “mental condition of the girl,” but police said the investigation is ongoing. As of August 23, coverage about the case appears to be almost entirely limited to that article and a few others reporting on the disparity.

The New York Medical Examiner’s Office told Heavy on August 23 that the cause of death was still pending in Reynoso’s death.

The body was transported to a boathouse, where the then unidentified female was pronounced dead, said the NYPD.

Vibe Magazine notes that it’s troubling how difficult it is to find information about Reynoso’s disappearance and death online, whereas the deaths of Vetrano and Marcotte have received heavy media coverage.

There is a Go Fund Me site for Reynoso’s family; it says, “A beautiful soul has recently passed as of July 31st. Her name is Maylin Reynoso. In a tragedy like this it is difficult, heartbreaking and sad. The cause of death is still unknown.”

A skateboard collective is now organizing a vigil in Reynoso’s honor, calling her a “sister skater,” Vibe Magazine says. “Over 12 Bronx teen girls who were missing for the past two years,” said Vibe Magazine.

Ensengundos says that Reynoso struggled with depression and bipolar disorder; she “had the condition for some time and often heard ‘voices,” her mother said, according to the publication.

Maylin’s Facebook page says she was single and from the Bronx. In 2011, she wrote on Facebook, “the worst part about my life is that i will never find the right guy and ill be a biejita (little old lady) dying alone -___- eating oatmeal all they yelling and pairs together yep i could see my future before my eyes.”

Her family and friends distributed a missing poster after she vanished:

When Reynoso disappeared, her mother took the missing posters around and contacted the media. A writer for Odyssey Online wrote, “There was no media coverage of her disappearance, only homemade posters on the subway that most people just walk by without bothering to look at.” 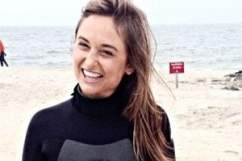 3. On Social Media, People Are Concerned That Maylin’s Death Has Been Ignored

People who knew Reynoso and those who care are also using the hashtag #ripmay on Twitter and Instagram.

Some in the community are organizing an event to remember Maylin and gain more attention to what happened to her. Vidal Guzman, one of those involved, said, “When we can’t feel safe in our own neighborhood then where can we feel safe at? This can happen to your sister, aunt, or daughter.”

Guzman said the event will highlight disappearances of other Bronx and Harlem women as well as human trafficking. Guzman provided Heavy with the above flyer. Guzman added, “I am from Nycunity. We also doing a rally and protest for Maylin at the same time. We just want to wake up the community around us.” Guzman questioned why the media isn’t covering Reynoso’s death more.

#ripmay you where and still are you beautiful person but now you've become a beautiful angle fly high ❤️?? pic.twitter.com/xOpuJqIwFM

Some who are posting say it’s wrong that Reynoso is not getting as much attention as the murdered joggers. People on Twitter insist they believe she was murdered.

My heart has shattered , I keep talking to you like if your right next to me. I miss you so much #ripmay

#ripmay baby you didn't deserve what they did to you, we'll find them soon rest in paradise. ?? pic.twitter.com/UOrg1NjCi9

Some have posted that other missing women in New York are being ignored too.

MAN I STAND UP FOR MY BOROUGH BUT THIS IS SICK. THIS IS CRUEL. Prayers go out to all of these girls. #BeSafe #RIPMAY pic.twitter.com/m5ZLaU0Jww

You can search for missing people in New York through the New York Police Department’s website.

4. Reynoso Worked at a Local Gas Station & Disappeared After Her Shift Ended at Night

Reynoso vanished after closing the gas station where she worked at night, according to a friend who posted about her disappearance on Instagram.

Maylin’s sister posted on Tumblr after Reynoso vanished, writing, “Okay so most of you know I don’t post much on here. But I wanted to take the time to post something that’s truly important to me. This is my sister Maylin Reynoso she has been missing for 10 days now which is since Wednesday 27th of July. Last seen was in Gas Station 89 Saint Nicholas pl 155th street Ny ny 10032. There is camera footage showing that she left work (which is this address) at 10pm. I believe she never returned back home. And yes I have contacted the police. But I just need your guys help amongst all of the others trying to help. The more people that know the better. It is also very odd that she has not contacted anyone in the family or her closest friends. Description: Name: Maylin Reynoso D.OB: 11/10/95 Last seen worn: Black t shirt, below knee light gray sweat/pants, black shoes and carrying Jean blue bookbag Height: 5’6 Weight: 146 lbs Age: 20 years old Last seen where: Gas Station 89 Saint Nicholas pl 155th street Ny ny 10032.”

A close friend also posted on the disappearance, “Unfortunately she’s been missing for a week now, with no trace. She contacted nobody which is extremely unlike her so im very worried.”

Although Maylin’s body was found three days after she disappeared in the river, the family did not realize the body had been recovered for days after that, said Ensegundos.

5. Reynoso’s Family Identified Her Body Through Tattoos & Were Upset at the Police & Media

Reynoso’s family was able to identify her body through tattoos she had with the name “Miracles” (for her grandmother), a lotus flower petal, and a Scorpio zodiac symbol, said Ensegundos.

Ensegundos says the family was upset with what they believed was slow police response to Reynoso’s disappearance and lack of interest by the news media. The body sat in the morgue unidentified for days before the family figured out it was there, the publication said.

The NYPD told Heavy that police “determined the female recovered from the water on July 30 was in fact Ms. Reynosa.”

Asked if the case was possibly a homicide, the NYPD said only that Reynosa’s death was “being investigated as a deceased individual,” and police were waiting for the medical examiner to determine her cause of death. “It’s an ongoing and active investigation,” the NYPD reiterated.