Two people were killed in an early morning shooting at Miami International Airport. The airport tweeted at around 7 a.m. on the morning of August 10 that the shooting occurred in an employee parking lot. The message added that there is “no impact to airport operations.”

1. The Identities of the Victims Has Not Been Released

CBS Miami reports that their chopper spotted a body covered by a tarp in the parking lot. The second body was slumped next to a car close by, according to the station.

NBC Miami’s Michael Spears tweeted that the two victims are men and that witnesses heard them arguing before the shots were fired.

The Miami Herald reports that the first victim is a man in his 50s or 60s and the second is in his 40s or 50s. They were both employees of the airport.

2. The Incident Is Being Reported as a Murder-Suicide

We are seeing a covered body in an airport parking lot near MIA. @EricaRakow at an active police scene @WPLGLocal10 pic.twitter.com/2I3jaZ1YuF

There has been no motive released for the shooting. CBS Miami reports that Miami-Dade police are investigating.

In a tweet, local police said that there was no threat to public safety in the area. NBC Miami’s Michael Spears described the shooting as a “murder-suicide.”

3. The Parking Lot Is Southeast of the Airport’s Terminals

The parking lot where the bodies were found is located at NW 45th Avenue and 13th Street.

4. There Are No Delays Due to the Shooting

A spokesman for the airport, Mark Henderson, confirmed to CBS Miami that the shooting was having no impact on operations at Miami International.

5. The Last Shooting at the Airport Came in 2005 When a Man Claimed to Have a Bomb

Body of Rigoberto Alpizar, killed by US airmarshals arrives back1. Wide shot plane on tarmac 2. Container being unloaded from cargo plane 3. Rigoberto Alpizar's father, Carlos Alpizar, looking at plane 4. Hearse driving on tarmac 5. Hearse leaving airport grounds STORYLINE The body of a Costa Rican native killed by US marshals earlier this month, arrived in the capital San Jose on Tuesday. Rigoberto Alpizar was killed on Wednesday December 7, after he ran from a parked American Airlines plane allegedly shouting that he had a bomb. Forty-four-year-old Alpizar was travelling from Quito to Orlando via Miami with his wife Anne Buechner. She told authorities her husband had a bipolar disorder, before he was shot on the tarmac. Buechner told witnesses and police her husband was off his medication when he became agitated and began running through the aisles of a commercial airliner that was about to depart from Miami International Airport. The two US air marshals involved in the shooting are on administrative leave. Alpizar Alpizar, left his native Costa Rica for the United States two decades ago. He became a naturalised US citizen and worked for the US chain Home Depot. Federal officials say Alpizar made a bomb threat in the jetway, after running out of the plane. They said they opened fire because Alpizar ignored their orders to stop, instead reaching into his backpack. Alpizar's brother said the shooting was unjustifiable as he and his wife had already passed through a security checkpoint. Neighbours said he and his wife had been returning to their home from a missionary trip to Ecuador. You can license this story through AP Archive: http://www.aparchive.com/metadata/youtube/451e314d7128de634287527c07601754 Find out more about AP Archive: http://www.aparchive.com/HowWeWork2015-07-21T15:11:42.000Z

This is the first shooting at Miami airport since December 2005. In that incident, Rigoberto Alpizar, 44, claimed to have a bomb in his carry-on luggage. He had landed at the airport from South America and was due to fly on to Orlando. Alpizar was killed on the jetway at one of the airport’s gates. He had tried to flee after making the claiming and being confronted. It was the first time that an air marshal had fired a weapon close to an airplane. 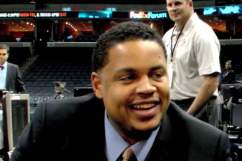