New York Police Commissioner William Bratton refused to apologize but is now resigning just days after state Assemblyman Michael Blake claimed he was grabbed and shoved by a police officer.

“There will be no apology forthcoming from me,” Bratton said, according to the Wall Street Journal, after meeting with Blake. “I have no reason to believe that the officer behaved in a significantly inappropriate manner.”

However, ABC News says Bratton is now voluntarily resigning Aug. 2. That move comes barely three days after Blake filed a formal account and told the media he was mishandled by the officer because he is black. ABC said the resignation was a surprise and did not provide a reason. Black Lives Matters protesters had called on Bratton to be fired for many reasons, including an end to the Broken Windows style of policing that led to his policing fame when it was credited for reducing crime in New York. However, critics say it has led to police abuses.

1. Blake ‘Teared Up’ When Describing How He Says The Officer Grabbed Him 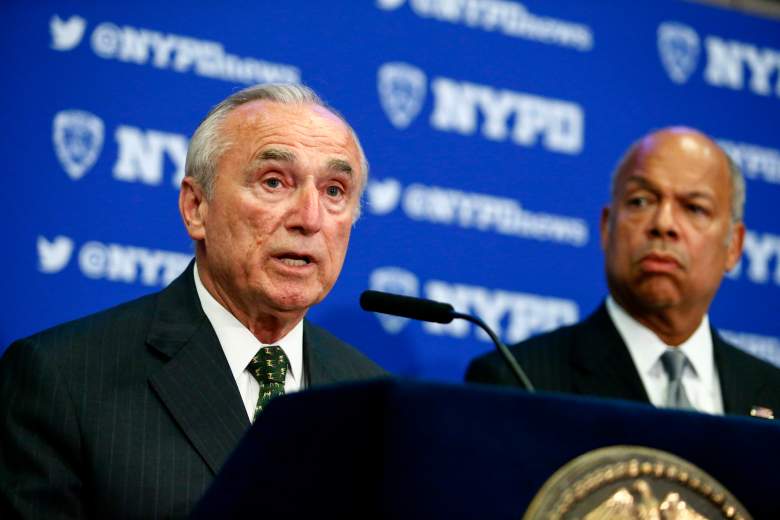 New York Police Commissioner William Bratton (left) speaks next to Secretary of Homeland Security Jeh Johnson during a press conference on the recent police shootings across the country on July 8. (Getty)

The assemblyman from the Bronx said cops grabbed and shoved him “after he tried to defuse a street confrontation,” according to The New York Daily News. CBS 2 said Blake teared up when talking about the incident, saying, “When you work as hard as I do for my community and to be treated how I was on Saturday, you all don’t, you all don’t know how it feels.”

The New York Times reported on July 31 that Blake said he was attending a family event when he saw a woman in handcuffs and “approached the officers involved to discuss the situation.” At that time, an argument broke out behind him. “As he rushed toward the confrontation a uniformed officer bear-hugged him, lifted him off the ground and ‘slammed’ him against a gate outside the housing complex,” The Times said, quoting a phone interview with Blake.

2. Blake Is a Democrat Who Represents The South Bronx But Graduated From Northwestern University

Tearfully, @MrMikeBlake: "you all dont know how it feels…to be treated the way I was on Saturday…" #nypd pic.twitter.com/T2bjyo4blZ

According to Blake’s biography, he was born in the central Bronx and was named after two historic Jamaican public servants. He was raised in the Bronx, and says he “continues to live a life rooted in the foundation of faith, politics and putting his heart and soul into all opportunities.”

He went to school in a school known for its inequalities but graduated from Northwestern University and is the Assemblyman of the 79th District in New York State, representing parts of Concourse Village, Morrisania, Melrose, Belmont, Claremont and East Tremont, said his biography.

The biography describes Blake as “passionate about urban entrepreneurship, Minority- & Women-owned businesses, community learning, sustainable communities and empowering young men of color.Blake is also the Founding Principal of Atlas Strategy Group, which focuses on political and economic empowerment for communities of color.”

3. Protesters Called For Bratton To Be Fired Recently & Police Say The Officer Perceived Blake Was a Threat

The police said that Blake “approached the sergeant from behind without identifying himself and ‘grabbed’ his shoulder,” the New York Times said. The officer perceived “a possible threat to the sergeant” and moved Blake about “five feet and put him against a fence,” The Times said, quoting a police spokeswoman. A captain noticed that Blake was an elected official and intervened, police told the Times, adding that there would be a review of the incident. Blake said the officer apologized once superiors told him Blake was an elected official.

CBS2 says Blake “disputes” the police account of the incident.

The protests focused on many other issues relating to Bratton and policing. On Aug. 1, protesters occupied the park next to New York City Hall and said they would not leave until Bratton was fired, listing numerous concerns, including “police violence” in general, and the death of Eric Garner.

After the incident, Blake said Aug. 1 that he wanted the police commissioner to have a face-to-face meeting with him and issue a public apology.

CBS2 says Bratton did meet with Blake but refused to apologize. “There will be no apology forthcoming from me. We’ll see where the investigation goes from here,” Bratton said. “Right now a lot of it is he said, she said.” He added, according to CBS2: “There is no action that has been taken against the officer, nor will there be. I have no reason to believe that the officer behaved in a significantly inappropriate manner. We will see what the investigation determines.”

5. Blake Alleges He Was Treated Differently Because He Is Black

The New York Times said that Blake had filed a formal complaint on July 30 with the Civilian Complaint Review Board claiming “excessive force” that he thought might be related to his race. Blake is African-American. “I do believe that the level of response was far heightened because I’m a black man – no question,” Blake told The New York Times.