A Missouri woman is accused of murdering a disabled man she claimed was an intruder to frame another man who was acquitted in the previous slaying of her friend.

However, police believe that Hupp, 57, shot and killed Louis R. Gumpenberger, 33, of St. Charles, Missouri, as part of the scheme against Faria. Hupp admitted shooting Gumpenberger but said it was in self defense and tried to pin Gumpenberg’s purported attack on Russell Faria, according to the charging document. Hupp was previously a witness in the high-profile murder trial of Russell Faria in the slaying of his wife, Betsy, who was her friend.

The story has so many twists that its plot becomes convoluted, but it breaks down this way: Police allege that Hupp was willing to murder a man – Gumpenberger – whom she didn’t know in order to get another man, Russell Faria, in trouble after he was already acquitted for murdering a woman whose life insurance payout she received.

In November 2016, Dateline featured a story on the Pam Hupp case.

As one Facebook user put it of the allegations against Hupp, which prosecutors will have to prove in court: “So she got a brain injured man to come into her house so that she could shoot him and frame somebody else for doing it when she was the one calling the police to say that she was shooting someone who was breaking into her house??? WHAT????”

1. Hupp Was a Witness in the Murder Trial Involving the Man She Allegedly Tried to Frame for the Gumpenberger Incident

A photo of Russell and Betsy Faria from the Facebook page “Free Russ Faria.”

Hupp was previously a witness in the high profile murder trial in the death of Betsy Faria, said Fox 2 St. Louis.

The TV station said Betsy Faria, who was suffering from terminal cancer, was stabbed 55 times at the family’s home in Missouri in 2011, said NBC News.

According to St. Louis Today, Betsy Faria’s husband, Russell, was convicted in the death but was then given a new trial after his defense attorneys argued he should have been allowed to blame Hupp in the homicide. He was then acquitted.

A Facebook page devoted to Russell Faria’s innocence says, “A falsely convicted man won his appeal in a bench trail, however is still a victim, seeking justice for his wife, as the true killer remains at large.”

Five days before Betsy was murdered, she changed the beneficiary on her life insurance policy to Hupp “whom she had met while working together in an insurance office. It was left with vague instructions on its use,” said St. Louis Today. Betsy’s daughters lost a legal effort to recover their mother’s $150,000 in life insurance proceeds, which went to Hupp. The daughters were also ordered to pay Hupp’s legal fees.

Russell Faria spent two years in prison before his first conviction was overturned, and he was retried and acquitted, said NBC. NBC said Hupp was the last known person to see Betsy alive. In the retrial, Russell presented four alibi witnesses, said NBC.

Hupp was not called during the retrial, said NBC, but a detective testified that “Hupp told police for the first time this summer that she and Betsy had been lovers.” Hupp has a husband, Mark.

Faria denied killing his wife; evidence at trial included “a note found on a laptop stating the author, purportedly Betsy, was ‘afraid’ of her husband,” but the defense claimed it could have been planted to frame Russell Faria. 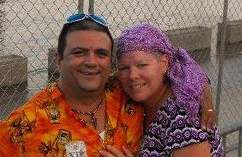 2. Gumpenberger Was Mentally & Physically Impaired From a Previous Car Accident & Police Say Hupp Tried to Claim Russell Faria Was Behind Her Encounter With Him

The charging document said Gumpenberger had suffered a traumatic brain injury after a 2005 vehicle accident. As a result, he had slurred speech and other physical and mental limitations. He did not drive or have known income.

Fox 2 says that Gumpenberger was supposed to have a job interview on the day he was murdered at a company that helps disabled people. He was described as gullible and kind, said the news station. He leaves behind two children, says KPLR.

Read the charging documents against Hupp in Gumpenberger’s death:

Charging documents regarding the death of Louis Gumpenberger & arrest of Pamela Hupp as issued by @ofallonpolice. pic.twitter.com/Ry55ijcK9I

She was not injured during the incident.

The charging document describes a convoluted story that Hupp gave to police.

Hupp told police she drove around St. Charles County the morning of the murder looking for thrift shops. She said she drove to her daughter’s house in St. Charles City but her daughter was not home, so she went back to her house to let her dog out, the charging document says.

She claimed she struck his arm with her arm, knocking the knife out if his hand, exited her vehicle and ran inside the house with the man pursuing her yelling that “he was going to kill her.” She claimed she tried calling 911 several times. When she realized “she was going to be unable to keep the subject out of the house, she ran into the master bedroom, got her revolver from her nightstand, and shot him while advancing on him when her bedroom door opened,” according to the charging document. However, police said in the charging document that Gumpenberger was not armed.

Hupp told police she “shot him until the gun stopped firing” and said she heard the gun “click’ multiple times, the charging document contends.

3. Police Found a Handwritten Note on Gumpenberger’s Body & Hupp Slit Her Wrists With a Pen in Police Custody, Reports Say

Police found a handwritten note and $900 in U.S. currency double bagged in a Ziploc bag located in Gumpenberger’s pockets, the charging document said.

The handwritten note “appeared to be instructions for Gumpenberger to kidnap Hupp, get ‘Russ’s money’ from Hupp at her bank, and kill Hupp in order to collect the rest of $10,000. The note also mentioned the last name ‘Faria,’” said the charging document. In a subsequent interview, Hupp said she surmised “the note was referencing a life insurance payout related to the Russ Faria murder trials,” said the charging document.

KMOV says that Hupp tried to commit suicide with a ballpoint pen after she was arrested in Gumpenberger death.

4. Police Interviewed a Female Who Was Approached by a Woman Claiming to be From ‘Dateline’

Police interviewed a woman who had called 911 on August 10, the charging document says. She had reported that a white female in a dark-colored SUV “randomly pulled up to her while she was standing outside of her residence. The woman inside the SUV told her she was from the Dateline television show and tried to recruit her to go with her to do a sound bite for an upcoming Dateline episode regarding 911 calls,” said the document.

The woman said she would give the female $1,000 cash up front and after completion of the soundbite. Initially the female agreed to go but demanded to be taken back home when the female in the SUV would not provide credentials and because “her story did not appear credible.”

She captured the incident via a surveillance camera affixed to her home and a review of the video showed a vehicle with a license plate matching Hupp’s, according to the charging document.

The woman picked Hupp out of a photo array, said the document.

The real Dateline did do a story on the Betsy Faria murder case:

According to the initial police press release, authorities announced that Hupp shot Gumpenberger during an “encounter” inside her home. Gumpenberger was killed on August 16.

According to Daily Progress, Hupp told police that Gumpenberger was a stranger she didn’t know.

“She told police Gumpenberger was a stranger who confronted her on her driveway then followed her into the home,” said the news site.

Police could not find a previous link between Gumpenberger and Hupp.

Hupp called 911 on August 16 at 12:08 p.m. to “report someone actively breaking into her house,” said the charging document. “While on the phone with dispatch, Hupp told the dispatcher she had a male intruder in her house and that she had shot him.”

People who knew Gumpenberger told police his mother drove him to doctors’ appointments and he walked everywhere else. Hupp’s daughter lives about two miles from the apartment where Gumpenberger lived, said the charging document.

Police accessed location data from Hupp’s cell phone, and one location “resolved to Gumpenberger’s apartment complex” between 11:25 a.m. and 11:29 a.m. on August 16, the charging document said. When arrested, Hupp invoked her right to an attorney and refused to give a statement. “During the interview of Hupp, she admitted to shooting the victim and she advised she still had $150,000 from a life insurance payout,” said the document.