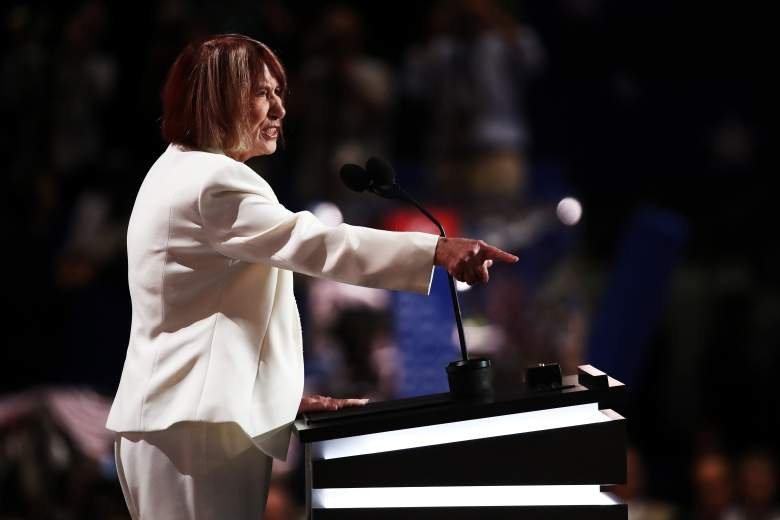 Pat Smith, mother of Sean Smith, one of the four Americans killed in the September 11, 2012 terror attack on the U.S. Consulate in Benghazi, Libya, delivers a speech on the first day of the Republican National Convention. (Getty)

However, he’s not the only person saying there’s a disparity in media coverage of the two Gold Star parents. Media critic Howard Kurtz is among those who made this point. He wrote of Khan and his wife, Ghazala: “The media have given this man and his wife an enormous platform—in a way they conspicuously declined to do when Patricia Smith blamed Hillary Clinton at the Republican convention for the death of her son in Benghazi.”

The similarities: Both are Gold Star parents who used a high-profile political convention podium to strongly criticize a presidential candidate. Others argue that there are key differences between the two, including the manner in which Clinton and Trump responded to the criticism from the grieving parents, with Trump fueling continued negative coverage because he has criticized Khan.

Here’s the background. Smith is the mother of Sean Smith, an American diplomat who was killed in the Benghazi massacre on Sept. 11, 2012 by al-Qaeda-affiliated terrorists.

Khizr Khan is the father of Capt. Humayun Khan, a Muslim who died in the Iraq War in 2004. He spoke at the Democratic National Convention and harshly criticized the Republican nominee Donald Trump. At one point during the speech, Khan waved a copy of the U.S. Constitution.

“If it was up to Donald Trump, [Humayun] never would have been in America. Donald Trump consistently smears the character of Muslims. … He vows to build walls and ban us from this country,” he said. He also said to Trump, “You have sacrificed nothing and no one.” Watch:

How do the cases compare?

The Media Have Covered Khan More Than Smith, Some Claim

Newsbusters also studied coverage after the conventions. “In the days (July 19 to August 1) that followed Smith’s indictment of Clinton from the RNC podium, CBS (3 seconds) ABC (13 seconds) and NBC (54 seconds) gave her speech a total of just 70 seconds of coverage,” says the site. “In the four days (July 29 to August 1) following Khizr Khan and his wife Ghazala’s speech NBC (31 minutes, 39 seconds), offered the most amount of time followed by ABC (14 minutes, 21 seconds) and then CBS (9 minutes, 13 seconds).”

Mediaite checked this claim and said it ignored the coverage on cable news networks. “Conceding that the Patricia Smith speech only got 70 seconds from the Big Three (it got much more from the cable news networks), Mr. Khan’s speech did get more coverage,” Mediaite said, but not 50 times. Mediaite says the “Big Three” devoted 1 minute and 49 seconds to Khan’s speech and that some of the coverage Newsbusters is counting includes Trump’s response to the speech and the Khans’ response to Trump, showing the coverage favored Trump, said Mediaite.

The Washington Post says Trump called in to Bill O’Reilly’s show on Fox News while Smith was on stage at the convention, drawing media coverage away from her.

The Daily Beast notes that Fox News did not air either the Khan or the Smith speech, but CNN and MSNBC aired both speeches.

Smith told Breitbart, a conservative site, “I wanted Hillary to explain mainly why she did what she did. They haven’t talked to me. They treat me like dirt.” Smith said on CNN that “Clinton has basically called her a liar.”

Khan has given multiple media interviews in which he has challenged Trump’s empathy, demanded he return a Purple Heart a veteran gave him, and accused the Republican nominee of having a “black soul.”

Their continued criticism gives the media a chance to keep the stories alive. 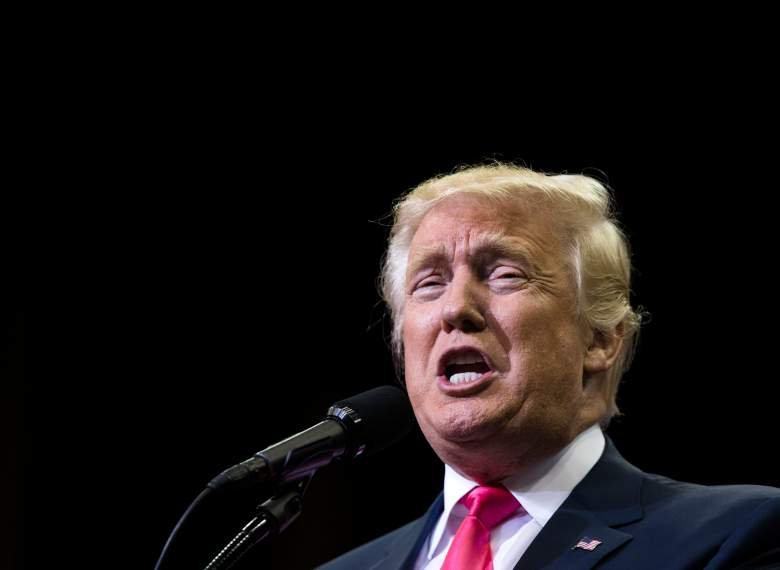 Donald Trump is trailing in the majority of the latest polls. (Getty)

Hillary Clinton “disputed Smith’s claims” in a TV interview, but she also said, “I don’t hold any ill feeling for someone who in that moment may not fully recall everything that was or wasn’t said,” Daily Beast said. However, Smith and some conservative sites claim that Clinton is essentially calling Smith and another Benghazi victim’s father a liar by disputing their accounts of what she told them about the attack.

Trump has made a series of controversial comments about the Khans, such as questioning why Khan’s wife stayed silent at the convention, and insisting that he had sacrificed too because he has created jobs. At one point, he said, “Mr. Khan, who does not know me, viciously attacked me from the stage of the DNC and is now all over T.V. doing the same – Nice!”

Top Republicans like New Jersey Gov. Chris Christie, RNC head Reince Priebus, and Arizona Sen. John McCain have disagreed with Trump on the Khans, fueling more coverage. Clinton has not faced criticism from within her own party over her response to Smith.

Some in The Media Have Criticized Smith & Khan

Why didn't you cover this MSM after mother of Sean Smith, Pat Smith spoke at RNC about her son.#Benghazi @AppSame pic.twitter.com/pmaZrvi36v

GQ writer Bethlehem Shoals tweeted, according to Kurtz: “I don’t care how many children Pat Smith lost, I would like to beat her to death.” He later apologized.

MSNBC’s Chris Matthews, said of Smith: “I don’t care what that woman up there, the mother has felt, her emotions are her own” but said it was wrong to “have someone get up there and tell a lie about Hillary Clinton.” He said Smith’s talk had “ruined” the evening. The Washington Times said Smith was vilified in the media after the speech, saying that Rachel Maddow of MSNBC called Smith’s speech “a spectacle so offensive it was hard even to comprehend.” Nation magazine said the speech was “a cynical exploitation of grief.” The New Yorker magazine said her speech was “a weaponization of grief” and The Washington Post said what Smith represented was “an early dip into the gutter,” said The Washington Times.

Criticism of Khan has come mostly in conservative media or from conservative commentators. Kurtz adds that some of Trump’s surrogates have continued fueling the story also; for example, his former aide Roger Stone tied Khan to the Muslim Brotherhood. Conservative sites and pundits have also tried to tie Khan to Sharia law (which he denies) and immigration law (he said on CNN he’d handled a few cases), helping keep the controversy alive.

Politifact fact-checked Smith’s statements, especially her claim that Clinton lied to her about the attack being caused by a video, and noted “No one recorded these brief meetings behind closed doors. Family members and Clinton disagree on what was said.”

Charles Woods, father of CIA operative Tyrone Woods, also said Clinton blamed a film, said Politifact, but other family members said she did not. National Review says that Woods produced notes to back up his claim.

In Clinton’s public statement, she had said, “We’ve seen the heavy assault on our post in Benghazi that took the lives of those brave men. We’ve seen rage and violence directed at American embassies over an awful Internet video that we had nothing to do with.”

Politifact said Clinton did say the attack was affiliated with Al-Qaeda to her daughter and the Libyan president the day it occurred but still says she thinks the video played a role.

Politifact determined that there was not enough evidence in the public record to show Clinton had intentionally or otherwise lied to Benghazi families, saying the administration was dealing with conflicting information at the time. 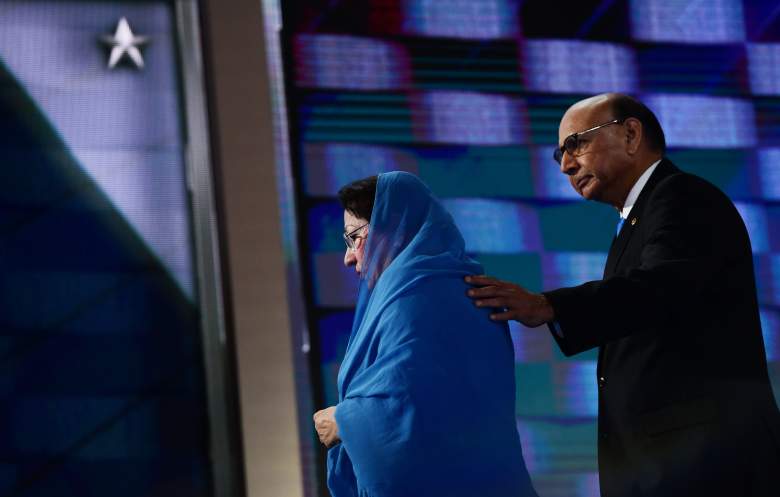 Kurtz pointed out that Smith has criticized Clinton repeatedly in the past, whereas Khizr Khan was a private figure few had heard of before the convention. The media may gravitate toward covering what is new.

The Benghazi attacks sparked congressional hearings, a book and movie. For example, in March, Smith publicly claimed that Clinton lied to her and said there was “a special place in hell” for people like Clinton.

Both Khan & Smith Have Spoken Movingly About Their Children

“I don’t know how to explain Sean,” Smith told Breitbart radio. “He was my only child. We kind of lived together. I took care of him. He had nobody else than me, and we were very, very close. Everyplace he was stationed, I tried to go and visit him. All over the world, I went.” 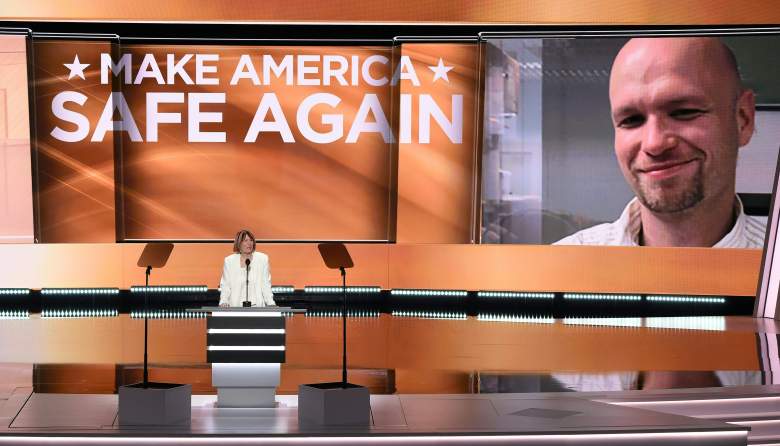 Her son was in the Air Force before he became a State Department IT contractor.

Khan has described his son’s humanity, empathy, and leadership. Humayun Khan took 10 steps forward to check out a suspicious vehicle and was killed when it exploded after telling his troops to step back.

His father told Vocativ: “We still wonder what made him take those 10 steps [towards the car]. Maybe that’s the point where all the values, all the service to country, all the things he learned in this country kicked in. It was those values that made him take those 10 steps. Those 10 steps told us we did not make [a] mistake in moving to this country. These were the values we wanted to adopt. Not religious values, human values.”