Police handcuffing a bleeding Paul O’Neal after he was shot. (Screenshot from video released by Chicago’s police review board)

Chicago’s Independent Police Review Authority has released graphic videos in the fatal shooting of unarmed teenager Paul O’Neal as he fled on foot from a traffic stop.

The Cook County Medical Examiner’s Office told Heavy that O’Neal was shot in the back. The videos do not capture the actual shooting because the body cam worn by the officer who fired the fatal shot either wasn’t working or fell off (although four gunshots are heard), ABC 7 reports. However, they do capture officers shooting toward the stolen Jaguar that O’Neal was in, parts of the foot chase, and the shooting’s immediate aftermath as officers converse and swear while O’Neal lies bleeding and motionless behind a house. 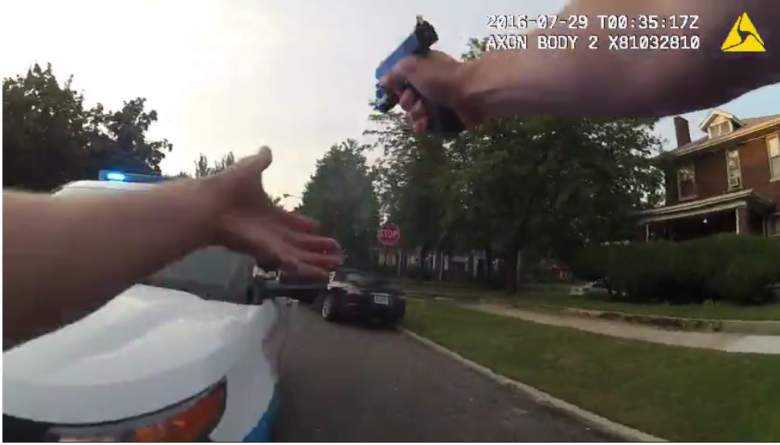 A screenshot shows an officer firing at the car after it has driven past him.

“What I saw was a cold-blooded murder,” said Michael Oppenheimer, the O’Neal family attorney. Protesters shut down a police news conference after the videos’ release, WGN said. Police Superintendent Eddie Johnson then issued a written statement instead that said in part, “My promise to the people of Chicago is that we will be guided by the facts and should wrongdoing be discovered; individuals will be held accountable for their actions.”

The police have said previously that they did not find a gun at the scene. ABC News reported, quoting the police spokesman, Anthony Guglielmi: “One thing they do know: When the incident was over, police did not find a gun, either on the street or inside the stolen vehicle.” The Chicago Tribune also reported: “O’Neal, who was unarmed, died of a gunshot wound to the back, authorities said.” The Tribune says the videos show “an admission by the officer who believed he fired the fatal shot that he had no idea if the 18-year-old was armed.”

The first video (above) shows an officer get out of his squad car and shoot at the stolen Jaguar as it drives toward and then past him. A foot chase ensues. The officer gives chase, but an officer ahead of him jumps over a gate. The first officer can’t get over the gate, but multiple gunshots are heard. Then, the officer goes around another way to encounter officers who are gathered around the shooting scene. One officer calls the mortally wounded O’Neal a “mother F—er” and an officer says, “Hands behind your back. Don’t F—ing shoot at us. Put your hands behind your back mother F—er.” (The officer used the actual expletive).

Other officers then arrive. The officers who were involved make conversation that is captured in the video, with one saying, “I shot at the car as it almost hit you” and “He almost hit my partner so I f—ing shot at him” and “F-ck man, I’m going to be on the f—ing desk for 30 days.” An officer says to an arriving officer, “I shot…” The cop tells him to relax and he says, “Oh, I’m straight.”

O’Neal died shortly after the shooting in a hospital. The officers have not yet been identified. According to The Chicago Tribune, “The city’s use of force policy explicitly bars police from shooting into a car when the vehicle represents the only danger.” The videos show at least one officer firing toward the car after it has driven past.

The second video shows a second officer giving chase after the car carrying O’Neal comes very close to the officer’s squad. The videos, altogether, capture “at least 15 shots being fired in about five seconds as the Jaguar passed the officers and drove away,” The Chicago Tribune said.

This officer also can’t get past the gate, and arrives at the shooting scene when O’Neal has already been shot.

In the second video, you can see O’Neal’s bleeding body lying face down as an officer handcuffs him and another puts his foot on O’Neal’s leg. Officers check O’Neal’s backpack. Blood is seen soaking through the back of O’Neal’s shirt. The images are disturbing. Watch:

The third video captures the moment that the vehicle O’Neal was in, a Jaguar reported stolen in a suburb, smashes into a squad car carrying officers who were responding to the pursuit call. That’s the moment O’Neal jumped out of the wrecked car and fled, starting the police chase.

CNN said the officer in the car that was struck is the officer who fatally shot O’Neal, adding that the police are investigating whether the collision could have disabled the officer’s body camera or whether some other factor caused it not to record. 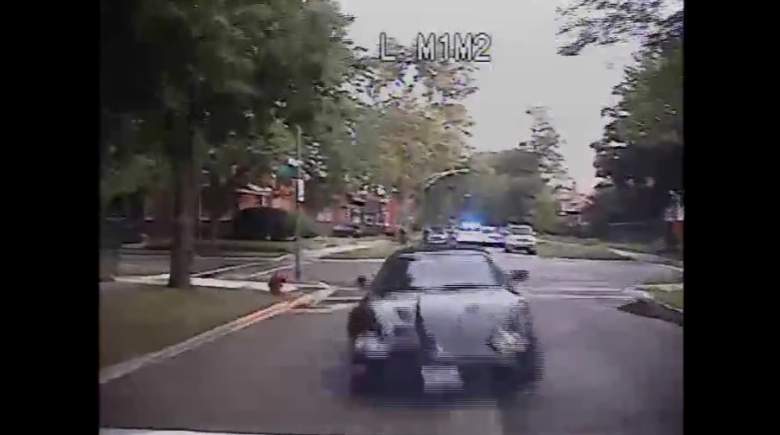 A stolen car carrying O’Neal is seen seconds before it crashes into an occupied squad car. Screenshot from video released by the Independent Police Review Authority.

Video 4: Other Officers Arrive at The Scene

The fourth video is less dramatic; it shows a squad looking for the stolen car and then captures images of officers arriving after the shooting has occurred.

O’Neal, a recent high school graduate who once dreamed of becoming a professional boxer or a chef like his mother, was shot on July 28. In a media statement, O’Neal’s sister, Briana Adams, said she wanted the public to know that O’Neal was a young man with goals.

#PaulONeal's sister makes statement: "I want everybody to know that Paul had goals." https://t.co/0bd1FNuxMU

The Chicago police superintendent took the unusual step of suspending the police powers of the three police officers who fired their weapons. The chief’s action occurred within one and two days after the shooting occurred.

Police said initially that preliminary investigation showed the officers may have violated policy. Three officers in all fired their weapons. The videos appear to be a mixture of body camera and squad camera footage.

The Chicago Tribune reported that the O’Neal family was too upset after viewing the videos to give public comment and quoted their attorney as saying: “It is one of the most horrific things I have seen.” They have filed a lawsuit against the Chicago police.

ABC 7 reported that “video of the shooting was recovered from dashboard cameras and body cameras worn by two of the three officers who fired at O’Neal. Police said the shooting itself was not captured because the body camera worn by the officer who fired the fatal shot was either not working or fell off during the chase.”

The Independent Police Review Authority released the videos on Aug. 5. The videos are “shocking and disturbing,” the review board’s head said shortly before the release. The O’Neal family broke down after watching the video and wasn’t able to immediatelyaddress the news media, ABC 7 said.

ABC 7 said that police say O’Neal was “unarmed” and in a stolen Jaguar that was fleeing the scene when he was fatally shot. The Chicago Sun Times initially said that O’Neal was “shot to death by Chicago police officers while trying to drive away from a traffic stop.”

However, The Chicago Tribune now reports that, “O’Neal struck two Chicago police vehicles in the sports car, and two officers fired at him while he was in the car, authorities said. O’Neal fled from the car, police said, and a third officer chased him behind a home. After O’Neal refused to stop, the officer shot him.”

The videos show the shooting occurred outside the car in a foot chase. The IPRA allowed O’Neal’s family to watch the videos before releasing them to the public and news media.

Awaiting the family of Paul O'Neal to leave IPRA HQ after seeing city video by his death at the hands of police. pic.twitter.com/VK6BW0rNKE

Sharon Fairley, head of the Independent Police Review Authority, wrote that the board is moving “as deliberately and expediently as possible in pursuit of a swift but fair determination” into O’Neal’s shooting, said The Chicago Tribune.

Fairley said the footage “as shocking and disturbing as it is, is not the only evidence to be gathered and analyzed when conducting a fair and thorough assessment of [the] conduct of police officers in performing their duties.”

O’Neal’s cousin previously told Heavy that O’Neal had recently graduated from high school and had a variety of interests, including professional boxing and becoming a chef like his mother. Read more about O’Neal here. Vigils and protests have erupted in Chicago after the O’Neal death.

It’s not clear from the videos whether O’Neal was driving the stolen car or a passenger in it. ABC 7 reported that O’Neal was the driving, saying, “O’Neal was driving the vehicle, which crashed into a police cruiser and then sideswiped another before two officers started shooting from inside their car. A third officer got out of their car and fired, what police believe, was the fatal shot.” However, O’Neal’s cousin, Zhivago Short, 20, told Heavy, “He wasn’t the driver.” There was another teenager in the car, he said. 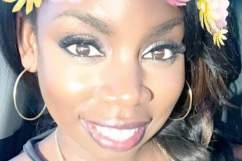