After a week of torrential rains that brought flooding, destruction and death to Baton Rouge, Louisiana, President Barack Obama finally visited the region as the waters began to subside. At least 13 people have been killed.

The President had been criticized by Donald Trump for not cutting his Martha's Vineyard vacation short. The Advocate also published an op-ed, calling for the president to visit.

Obama addressed his critics in his statement in Louisiana, insisting that the people of Louisiana cannot be forgotten about. "Sometimes once the floodwaters pass, people’s attention spans pass," Obama said. "This is not a one-off. This is not a photo op issue. This is, how do you make sure that a month from now, three months from now, six months from now, people still are getting the help that they need. I need all Americans to stay focused on this."

Obama also took questions and said that he wasn't concerned about the process of getting federal funds to Louisiana becoming political. "I guarantee you nobody on this block, none of those first responders, nobody gives a hoot whether you’re Democrat or Republican," he said. "What they care about is making sure they’re getting the drywall out and the carpet out, and there’s not any mold building, and they get some contractors in here and they start rebuilding as quick as possible. That’s what they care about. That’s what I care about."

Click through for photos of the president's visit to Louisana, which also included a meeting with the family of Alton Sterling. (Getty) 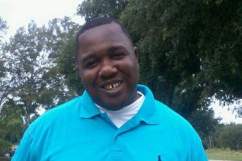