An explosion killed at least 13 young adults celebrating a birthday party in a bar in Rouen, France.

Rouen is the same community where a Catholic priest was murdered by two ISIS-aligned terrorists; however, French media are saying the Aug. 5 explosion was accidental.

The Mirror says the victims are between the ages of 18 and 25-years-old. Paris Normandie reported that “Friends and relatives of the youth who participated in this evening’s birthday went there to get information” and were directed to the hospital.

Paris Normandie added: “It is when those invited to the evening lit the candles on the birthday cake that the fire broke out.” The news site said the investigation will determine whether the ceiling inflamed and said, “The ceiling, insulated by a supposed material soundproof the room… would have caused a toxic gas.”

“Lawrence Labadie, deputy prosecutor at Rouen parquet emphasizes an accidental fire. There was no explosion before the fire…Local residents who heard an explosion were surely surprised by the explosion of glass, blown by the heat caused by the fire,” said the news site.

France has been on edge since the murder of Father Jacques Hamel and the massacre of celebrants at a Bastille Day celebration in Nice, not to mention the 2015 terrorist attack at a Paris night club.

The Guardian, citing French media reports, said the fire broke out in the basement of the Cuba Libre bar “where a private birthday party was being held.” Thirteen people died, and six were rescued and are receiving treatment, The Guardian said.

CNN reported that “a major street was blocked and a security perimeter was set up around Le Cuba Libre bar.” 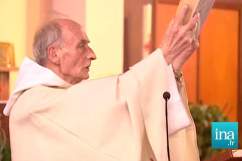 Loading more stories
wpDiscuz
2
0
Would love your thoughts, please comment.x
()
x
| Reply
See video and photos of the aftermath of a bar explosion in Rouen, France that killed at least 13 people at a birthday part