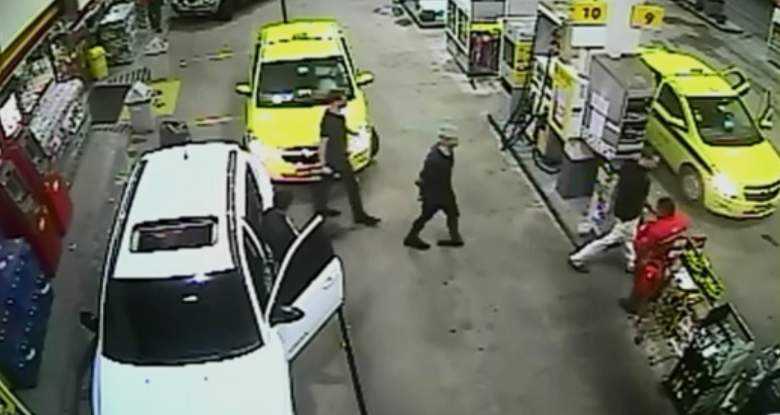 A screenshot from the video posted at Globo.com.

A surveillance video at a Brazilian gas station helped unravel Ryan Lochte’s now infamous story that he and three other U.S. swimmers were robbed, police say.

U.S. medalists Ryan Lochte, Jimmy Feigen, Gunnar Bentz, and Jack Conger were together after a night at a hospitality house when Lochte claimed they were robbed at gunpoint by people dressed as police, a story he repeated on American television, calling the men “victims.”

Numerous media sites in America and Brazil are now reporting that Brazilian police do not believe a robbery occurred. The New York Times quoted a Brazilian police official as saying: “Unfortunately, the swimmers told one lie after another. We’ve been able to determine that there was no armed assault.” However, police did say two security guards pointed weapons in the swimmers’ direction after they tried to break into a bathroom, said The Chicago Tribune.

Rio federal police have recommended that Lochte and Feigen face charges of false reporting of a crime, but sources close to the swimmers insisted to ABC News that the swimmers were held up by gunmen until they gave them money. They dispute the police account.

Video of the swimmers at the gas station was released through Brazilian media. Watch:

Sources close to Lochte say the video was edited and three minutes are missing, said TMZ. “Our sources say Lochte and his team claim they were indeed taken out of a cab at gunpoint, but the video doesn’t show that because the gas station edited it out,” said TMZ.

You can watch a lengthier version of the video with other footage here at this Brazilian news site.

O Globo, the Brazilian newspaper that released the video, wrote, “Images of a gas station security cameras on Avenue of the Americas, in Barra da Tijuca, west of Rio Zone, show the moment of confusion among the American swimmers and security establishment. According to the video, they come out of the bathroom…and then are unable to leave the premises by security.”

The news site says, “The images also show one of the swimmers raising their hands while addressing the security. According to the Civil Police, swimmers lied.”

The Brazilian newspaper said police officials want an apology, quoting Fernando Veloso, Civil Police Chief, as saying the “athletes should apologize to Rio” and “The only truth they told is that they were drunk.”

Lochte has since apologized, although he maintains the men were confronted at gunpoint and asked to pay money in order to leave.

“No robbery was committed against these athletes. They were not victims of the crimes they claimed,” Veloso said during an afternoon news conference, said Chicago Tribune. The Tribune quoted Veloso as saying security guards were justified in pulling weapons on the summers who were large and strong men who “were conducting themselves in a violent way.”

ABC News reported, citing a Brazilian police source, that “one of the swimmers was seen on CCTV footage breaking down the door to the bathroom at the gas station and fighting with a security guard” that night. 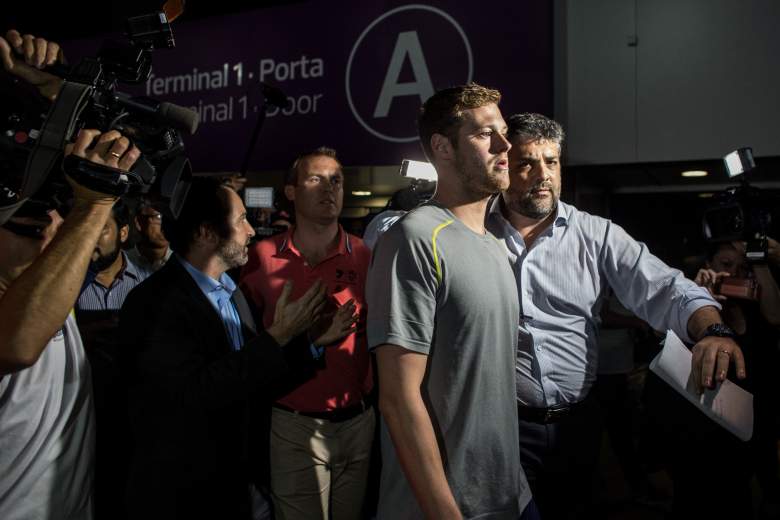 CNN says the Brazilian daily newspaper O Globo “cited the owner of the Barra da Tijuca gas station as saying that the athletes had thrown stones at the business and torn one of its signs before urinating in the street on the morning in question.”

Translation of the O Globo story says the security guards at the gas station said that a taxi driver stopped at the station with four men in the car. “He recognized swimmer Ryan Lochte as one of the athletes who were in the vehicle. The witness also reported that the manager was called” after confusion about “the gas station funds. And when it came to the bathroom he found” a damaged door, among other things. The swimmers were “aggressive” and “clearly drunk,” said the news story. 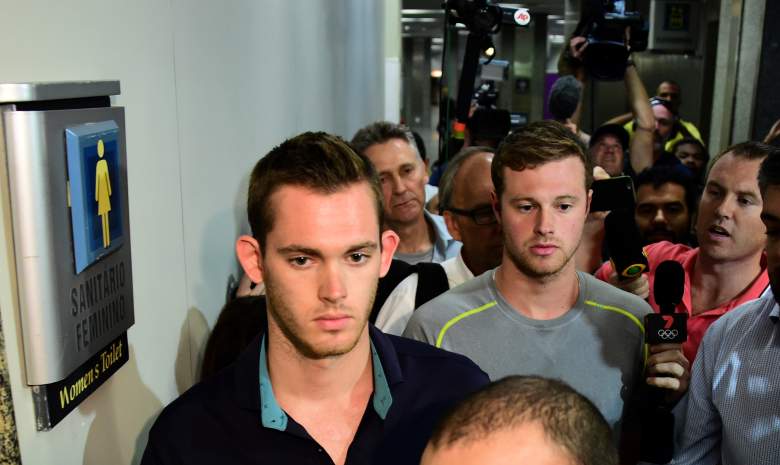 American swimmers Gunnar Bentz (L) and Jack Conger leave the police station at the Rio de Janeiro International Airport after being detained on the plane that would travel back to the US. (Getty)

O Globo continued that a person came to the station to help with communication between the security guards and swimmers in English. “The Americans… offered” $20 and 100 Brazilian Real “to pay the bathroom damage and left.” The newspaper said the money was in Brazilian Real; one Real equals .31 American dollars. The taxi driver insisted on waiting for the police, said the newspaper.

The UK Daily Mail ran another video showing the men returning to the Olympic Village. The men’s calm demeanor in the second video, as well as inconsistencies in the men’s stories, led a Brazilian judge to order their passports frozen until police could figure out what really happened. In the surveillance video, they have their watches with them.

There’s also video of the swimmers going into Club France.

Lochte had already returned to the United States, though, where he continued to give interviews insisting the men were robbed. Brazilian authorities pulled Bentz and Conger off a flight on Aug. 17 for questioning. Feigen is still in Brazil.

The Today Show’s Matt Lauer quoted Lochte as saying in an interview on Aug. 17, “We wouldn’t make this story up. We’re victims in this and we’re happy that we’re safe.”

The Today Show said Lochte had changed some details of the story in the interview; he told The Today Show’s Billy Bush: “The guy pulled out his gun, he cocked it, put it to my forehead and said ‘get down.’ I was like (puts hands up) I put my hands up. I was like ‘whatever.’ He took our money, he took my wallet.” But to Lauer, he said, the gun was pointed in his “general direction,” according to The Today Show.

Lochte is a 12-time Olympic medalist. He has tweeted that the men were robbed:

As for Conger and Feigen, the Brazilian newspaper quoted their lawyer, Sergio Riera, as saying, “The police say they are witnesses, and the order of the judge says something else. While this is not solved, they will not give evidence,” adding that the men are very scared.

Bentz and Conger were allowed to return to the U.S. later on Aug. 19. They waded through an angry crowd.

Feigen also insisted the men were robbed in an interview with a San Antonio newspaper. “We were robbed at gunpoint,” he said, denying media reports of a fabricated event. “It sounds like people assume we’re guilty.” That interview came just minutes before an ABC reporter tweeted that Brazilian sources said the men made up the story to cover up the fight.

Swimming great Michael Phelps rooms with two of the men but was not with them during the alleged caper because he says he was sleeping. 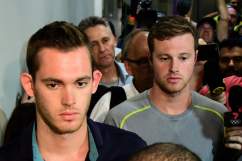 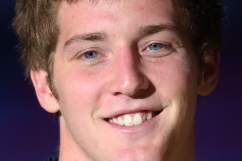 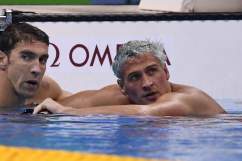 Where Was Michael Phelps During Ryan Lochte ‘Robbery’? Sleeping