The Donald Trump supporter who caused a spectacle by scaling the side of Trump Tower in an effort to meet the Republican presidential candidate was identified by police sources as Stephen Rogata (previously known as Michael Joseph Ryan), the New York Daily News reports.

The climber’s identity was difficult to unravel because he had changed his name to Rogata and had an ID in that name but was previously Michael Joseph Ryan of Great Falls, Virginia, said The Daily News.

On his Facebook page, Rogata/Ryan identifies himself as a “former Intern at Fairfax County Republican Committee.” The New York Post said police had confirmed his new identity was Rogata.

Members of the New York Police Department’s Emergency Services Unit eventually removed a window and pulled the climber, 19, into the 21st floor of building as he tried to climb past them, ending the high-altitude standoff shortly after 6:30 p.m. He became an “instant folk hero,” said PIX 11.

The daredevil, who told police his name was “Steve from Virginia,” used suction cups to slowly scale the Manhattan tower owned by the presidential candidate, causing a commotion on the streets and social media as police initially tried in vain to get him to stop.

Police said at a press conference that the climber came to New York City from Virginia on Tuesday and was staying at a local hotel. He told police he used to go by a different name. USA Today said police “were trying to get his identity straight” after arresting the clumber. The climber had “several IDs with him.”

The climber was taken to Bellevue Hospital for a psychiatric evaluation, police said.

Some on social media were rooting for the man:

I am rooting for this guy to make it past the cops and make it up the #TrumpTower This guy is an awesome climber!!!

The “human fly” started climbing shortly after 4 p.m. and reached the fifth floor of the 58-story building an hour later, continuing on, said CNN.

1. The Climber Told Police He Was Trying to Get Donald Trump’s Attention & Posted a Video on You Tube The Day Before Using a Fake Name 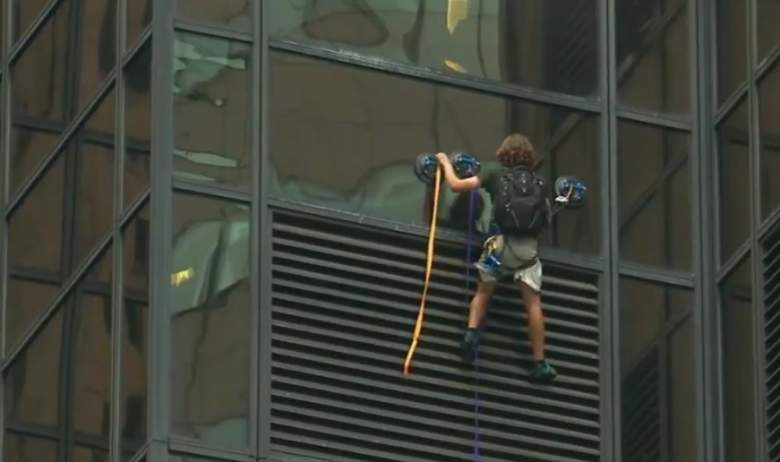 A screenshot from a live video of the man climbing Trump Tower. (YouTube)

In a video posted the day before the climb, a man says he climbed Trump’s tower to get his attention. CNN says police believe the video was made by the Trump Tower climber. The video was posted in the name of “Leven Thumps”; however, that is a children’s fantasy book series by writer Obert Skye.

In the video, the man, wearing a hoodie, and seen in profile, says, “Hello Mr. Trump, Excuse my manner of appearance. I just don’t know how many people will watch this. I would rather not be recognizable. I am an independent researcher seeking a private audience with you to discuss an important matter.”

He then says he wants people to vote for Trump.

“I guarantee it is in your interest to honor this request. Believe me, if my purpose was not significant, I would not risk my life pursuing it. The reason I climbed your tower was to get your attention. If I had sought this by conventional means, I would be much less likely to have success because you are a busy man with many responsibilities. I’ll get my contact information to your campaign so that if you are interested you can respond. As for anyone else who is watching, please help this video go viral so it gets to Mr. Trump and be sure to vote for Mr. Trump in the 2016 election.” 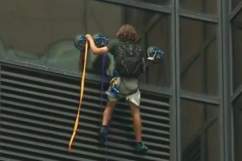 2. The Climber’s Parents Were in Italy When He Staged The Stunt & He Was Described as ‘Very Conservative’ By a Neighbor

The Daily News says the climber’s parents live in a neighborhood of million dollar homes and his father is on active duty in the U.S. Navy.

Neighbors told the Daily News that “he was left alone when the rest of the family toured Naples, Pompeii and Rome” and his parents returned Wednesday to find out what had happened.

Rogata/Ryan drove to New York in a Honda Accord, and neighbors expressed shock he would pull such a stunt.

According to CNN, Trump Tower is “Trump’s highest-profile property and where his presidential campaign is headquartered — next to Central Park in Manhattan.”

The news site said that Trump was in Virginia campaigning and wasn’t in the tower.

Michael Cohen, an attorney and executive vice president for the Trump Organization, issued a statement, saying “This man performed a ridiculous and dangerous stunt. There’s damage to the building and he caused the unnecessary deployment of New York’s finest to protect his safety and the safety of everyone in the building. He’s caused the shutdown of traffic on Fifth Avenue. I’m 100 percent certain the NYPD had better things to do. If Mr. Trump were here he’d be thanking law enforcement for the job they’re doing.”

Trump himself struck a somewhat different tone, although he also thanked law enforcement.

Great job today by the NYPD in protecting the people and saving the climber.

Police said they were in contact with the Secret Service during the incident. The man told officers he wanted to get all the way to the top of the building to talk to Trump, according to police.

3. Rogata/Ryan Received His GED & Works at a Plant Nursery, a Neighbor Says

Whoa. The #TrumpTower climber almost hit with a wall of glass after the #NYPD breaks window to try & stop the climb https://t.co/au9cGoPLfh

A neighbor and family friend, Carolyn Garofalo, told ABC News that the teenager is a “nice kid, the boy next door.”

Carolyn told ABC she and her husband invited the Ryans over for dinner before they left for Europe and nothing seemed amiss with Michael, who didn’t mention politics. She told the network that he didn’t receive his high school diploma but has a GED and worked at a nursery called Pots & Plants on the Pike; a coworker there told ABC that Michael was smart and in “gifted and talented classes” growing up.

ABC News said the daredevil “appeared to change his path at one point, shimmying sideways to avoid holes that police sawed into ventilation grates, where officers were leaning out.” According to ABC, NYPD Emergency Services officers were trying to “safely isolate” the climber.

The New York Post said that police officers “climbed through the building’s air conditioning vents to reach him, but he suctioned his way away from him.”

A police officer broke a window two floors higher than the man and “stuck his head out to talk to him,” said the Post, but the climber wouldn’t stop.

Whoever lives on the 21st floor of #TrumpTower is going to have an extra windy night. pic.twitter.com/ks6jMwUkWS

“He keeps going,” said Gerald Iorio, who works across the street from Trump Tower, told The Post. “The cops can’t get him.”

Authorities were baffled about how to stop the man for hours.

Mike Giroux of the Yonkers Fire Department told CBS New York that emergency personnel had a tough situation trying to get the man to stop.

“It’s really tough because the guy definitely doesn’t want to be caught and he has the ability to stay away from the PD,” Giroux told the TV station. “So now it comes to a tough situation — what are we going to do? Are you really going to take this next window, try to corner him? It’s a tough call.”

4. The Climber Was on The Cross Country & Debate Teams in High School & Participated in The Young Republicans

Maxwell Luo, who went to high school with Rogata/Ryan told Heavy: “We were both on the cross country team…he was also on the debate team.”

He said that Ryan didn’t speak much about politics in high school, but he believed he was in the high school Republican club.

Luo said he didn’t ever think his old high school classmate would end up in the news this way.

“It was weird — in the first few years of high school, I thought he was a great student and everything. He seemed to be doing well and I recall he was pretty good at school,” he said. “After maybe junior year or something, he started to fall off in his academics apparently. My friend who was in his history class said he never did any homework for the class and he started to focus on something he was doing on his own. Then he dropped out of high school to pursue his own things.”

Luo said “some people said he was trying to start his own business” but he didn’t know details.

But Luo didn’t think there was anything odd about Ryan/Rogata. “I don’t really have an off-putting impression of him. He really did seem very normal when I knew him,” he said.

He watched part of the Trump Tower climb live and didn’t even realize it was Ryan/Rogata at first because he “looks different” now.

The Wall Street Journal reported that the incident, which began at 4 p.m., “led authorities to shut down East 56th Street between Madison Avenue and Fifth Avenue. Large crowds gathered at intersections to observe the climb.”

@NYPDSpecialops elite cops train for these kinds of things everyday. #NYPD #ESU best in the world at what they do. pic.twitter.com/FEdtL7sKaR

Rogata had a harness on as he climbed, said The Los Angeles Times.

PIX 11 said, “Across social media, the phrase ‘Steve from Virginia’ was trending. The crowd assembled at the tower’s base kept chanting ‘Steve’ and ‘Let’s go Steve’ in almost unanimous support of his escapade.”

Rogata was taken to the hospital; when he is released, he may “be arrested and most likely charged with criminal trespass and disorderly conduct, police said,” according to USA Today.

5. The Climber Used a Device With Suction Cups to Scale The Building & A Huge Online Audience Watched the Climb

According to CBS New York, “Witnesses said the man used suction cups to make his way up the glass tower from an outdoor terrace. He also had harnesses, rappelling gear, and a backpack.”

Two eyewitnesses thought Rogata was base jumping at first.

“We were in the public garden at Trump Tower when all of a sudden the guy took off his basketball shorts and sprinted down the side of the building on the ledge,” Blake Crowson, 20, told The New York Daily News. “We thought he was BASE jumping. He had two duffel bags that looked like they had climbing ropes.”

On social media, people were obsessed with the stunt.

Between the Olympics and the guy climbing Trump Tower, I've gotten approx. nothing done at work today.

If this all turns out to be a PR stunt for the new King Kong movie, I'll lose my damn mind. #TrumpTower