Trump, speaking in Green Bay on Aug. 5, said that Ryan was a “good man.” Ryan has been way ahead in the polls in his Wisconsin primary, but some had criticized Trump, the Republican nominee, for not supporting the House Speaker of his own party. Trump’s VP Mike Pence had earlier endorsed Ryan.

In June, a poll showed a Democrat in striking distance of McCain. In contrast, Ryan is squaring off against a Republican rival in a few days.

Ayotte was down 10 points in the latest poll, according to The Washington Post.

The theme of Trump’s speech In Green Bay was a need for unity; Trump’s previous refusal to endorse Ryan, especially, had caused consternation among Republicans and reportedly angered Republican National Committee Chairman Reince Priebus. Priebus is from Wisconsin and is a close ally of Ryan.

Ryan has a primary challenger from the right; a tea party-styled businessman, Paul Nehlen, who has adopted some of Trump’s stances. Trump had Tweeted a thanks to Nehlen recently after Nehlen supported Trump in his war of words with Gold Star parents Khizr and Ghazala Khan.

However, Nehlen, in the last poll, was trailing dramatically, and Ryan has the support of top Republicans in Wisconsin, including those who have supported Trump (even tepidly). Ryan, Gov. Scott Walker, and Sen. Ron Johnson (who is bogged down in his own primary bid against once incumbent Russ Feingold) skipped Trump’s Green Bay rally.

Meanwhile, @ScottWalker is enjoying some spaghetti about 250 miles away from @realDonaldTrump. https://t.co/zFj56dv416

Nehlen has caused controversy recently by saying in a radio interview that he was open to deporting all Muslims, including citizens, from the country, a stance Ryan criticized.

Ryan endorsed Trump after hedging on an endorsement. 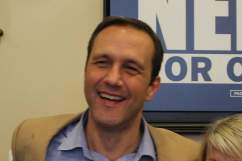