At a rally Tuesday in Wilmington, North Carolina, Donald Trump made controversial remarks seemingly calling for the assassination of Hillary Clinton. Addressing the fact that the next President of the United States will likely pick four Supreme Court Justices, Trump said that “if she gets to pick her judges, nothing you can do folks.” He then paused, and added, “Though the Second Amendment people, maybe there is, I don’t know.” These comments were widely taken as a reference to Clinton being assassinated, and caused a firestorm on social media:

Apparently Donald Trump thinks gun violence is a viable solution. He can never again speak out about anyone else… https://t.co/JdlSXgGROH

Republican #Terrorist trump threatens to get his gun nut supporters to murder Hillary Clinton if she wins https://t.co/TjV5aHrR3w

Donald Trump suggested someone kill Sec. Clinton. We must take people at their word. @SecretService must investigate #TrumpThreat.

The Secret Service is aware of the comments made earlier this afternoon.

However, legal experts such as California criminal defense lawyer and free speech advocate Ken White believe that Trump’s remarks, while distasteful, are protected speech. Trump’s remarks, in White’s opinion, likely do not meet the threshold of either a true threat or incitement, the relevant exceptions to free speech Trump could be prosecuted under.

“They always holler at us to get an education. And now I have already received my draft classification as 1-A and I have got to report for my physical this Monday morning. I am not going. If they ever make me carry a rifle the first man I want to get in my sights is L.B.J. They are not going to make me kill my black brothers.”

The Supreme Court ultimately agreed with a lower court opinion that Watts’s remarks were only “a kind of very crude offensive method of stating a political opposition to the President,” but left “true threats” only vaguely defined. True threats were made more specific in Elonis v. United States, which ruled that a Facebook post containing violent rap lyrics did not constitute a threat due to a lack of specific intent. White does not believe Trump’s remarks constitute a threat for simpler reasons: he never said he’d actually do anything.

People are referring to this as a threat, but it’s more like incitement. Under any interpretation Trump isn’t saying he will shoot anyone; he’s suggesting that someone else might — and perhaps implying that they should.

As stated above, White believes that the more relevant free speech exception is incitement, which is also the more narrowly defined exception. Most of the incitement case law stems from Brandenburg v. Ohio, in which an Ohioan Ku Klux Klan leader proposed “there might have to be some revengeance taken” if the government continued a perceived course of oppressing white people. The Supreme Court ultimately ruled in Brandenburg’s favor, establishing the three-criterion “Brandenburg test” for potential incitement cases: incitement can only be prosecuted if violence is imminent, intended, and likely as a result of the remarks.

White dismisses the possibility of an incitement charge:

Thus, since the Klansman wasn’t advocating imminent lawless action and likely to incite it, his words were protected by the First Amendment. By the same logic, Trump’s comment is protected. It’s conditional, it’s directed to something that will happen (at the earliest) more than six months in the future, and it’s not likely to produce action. I don’t think this is a close call at all.

For his part, Trump disputed the popular interpretation of his remarks after the event, saying he only meant to highlight the “power of unification” of Second Amendment supporters. Trump spokesperson Katrina Pierson said on CNN that Trump only referred to what “could” happen, not what should. 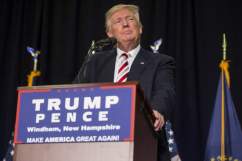