Map of the infected area of Miami Beach. (Florida Department of Health)

Florida’s governor says officials have confirmed that the Zika virus has spread to Miami Beach.

According to Reuters, officials said on Aug. 19 that the new area of transmission is a “small area in Miami Beach, the second area in Miami-Dade county where the Zika virus is spreading.” That means Zika is expanding in Florida, the only state hit with local transmissions.

“Florida has confirmed local transmissions of Zika virus are occurring in two small areas in Miami-Dade County,” the Florida Department of Health says.

The CDC has a facts page on Zika.

1. Some of Those Infected in Miami Beach Are Not From the Area & The Virus Often Causes no Symptoms 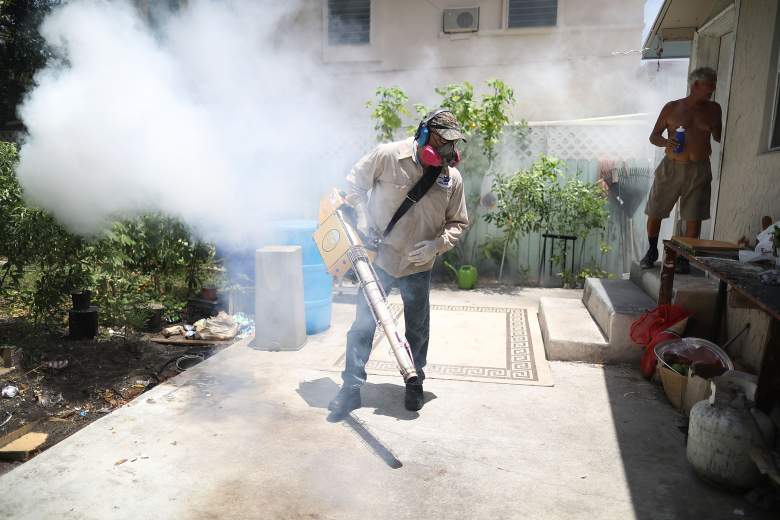 Carlos Varas, a Miami-Dade County mosquito control inspector, uses a Golden Eagle blower to spray pesticide to kill mosquitos in the Wynwood neighborhood as the county fights to control the Zika virus outbreak on August 2, 2016 in Miami, Florida. Officials said Aug. 19 that another area of Miami is infected in Miami Beach. (Getty)

According to Reuters, two of the people infected in Miami Beach are residents of the area, and three people are from out of town.

The Washington Post said the three non-residents are from Texas, New York and Taiwan and “have returned home but were infected while traveling in Miami Beach.”

The Florida Department of Health says only about 1 in 5 people infected with Zika virus have symptoms.

The illness usually goes away within a week and there is no specific treatment against the virus. The concern with Zika is whether it causes microcephaly in newborns; the Florida Department of Health says further studies are being conducted regarding the link between such abnormalities and Zika in Brazil. 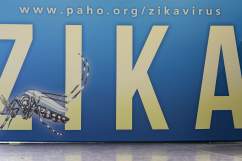 2. Thirty-Six People Were Infected Locally With Zika in Florida & Pregnant Women Have Been Urged to Avoid The Infected Areas

The Florida governor says the five new Miami Beach cases brings the total number of people infected locally with Zika in Florida to 36, according to USA Today. Others have been infected with the virus after traveling elsewhere; the local cases are of concern because they indicate the virus is spreading in Miami itself and infecting people there.

The newspaper said pregnant women were urged to avoid Miami’s Wynwood neighborhood earlier this month after Zika was transmitted there. The Washington Post said that marked the first time federal officials had “ever had warned against travel to a part of the continental United States because of the outbreak of an infectious disease.” They are now advising that pregnant women avoid the Miami Beach transmission zone as well.

Of the two areas, The Florida Department of Health says, “Area One is a small, less than one-square mile area in Miami-Dade County, just north of downtown. The exact location is within the boundaries of the following area: NW 5th Avenue to the west, US 1 to the east, NW/NE 38th Street to the north and NW/NE 20th Street to the south. The department has cleared three portions within the one-square mile as no additional people tested positive in those areas.”

Area Two is a “less-than 1.5 square mile area in Miami Beach within the boundaries of 8th and 28th streets.”

3. The Virus Spreads through Mosquitoes & Can Also be Sexually Transmitted 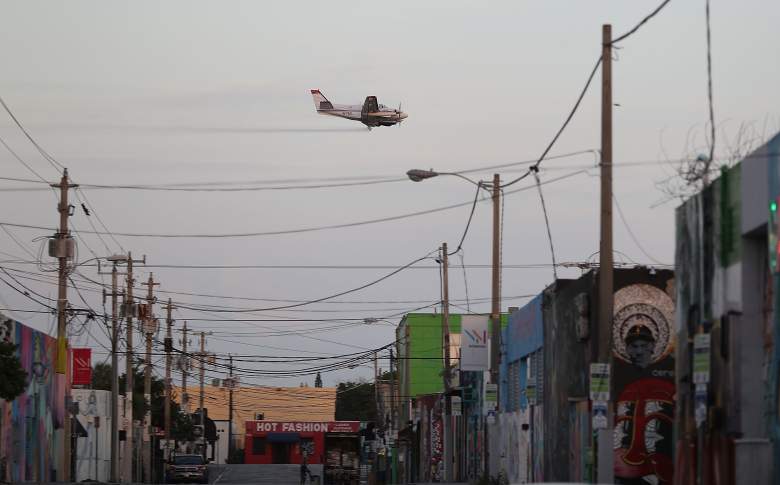 A plane sprays pesticide over the Wynwood neighborhood in the hope of controlling and reducing the number of mosquitos, some of which may be capable of spreading the Zika virus on August 6, 2016 in Miami, Florida. (Getty)

USA Today says that Florida is the only state in the United States where mosquitoes are transmitting the virus to people.

NBC says Florida health officials believe people are getting it from mosquito bites. Florida’s Health Department says, “Zika fever is acquired through the bite of an infected mosquito, including the same mosquitoes that can transmit dengue and chikungunya. Perinatal and sexual transmission have also been reported.” The CDC says Zika can be sexually transmitted, and condoms can prevent its transmission.

“The local spread — meaning none of those infected had traveled to Zika-affected regions — strongly suggests that mosquitoes in the area have become infected with the virus and are biting people and spreading it,” said NBC. 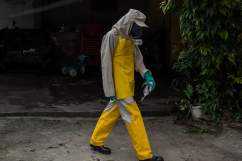 Can the Zika Virus Be Sexually Transmitted?

4. The New Transmissions Were All in a Small Area of Miami Beach & Congress Is Fighting Over Increased Funding 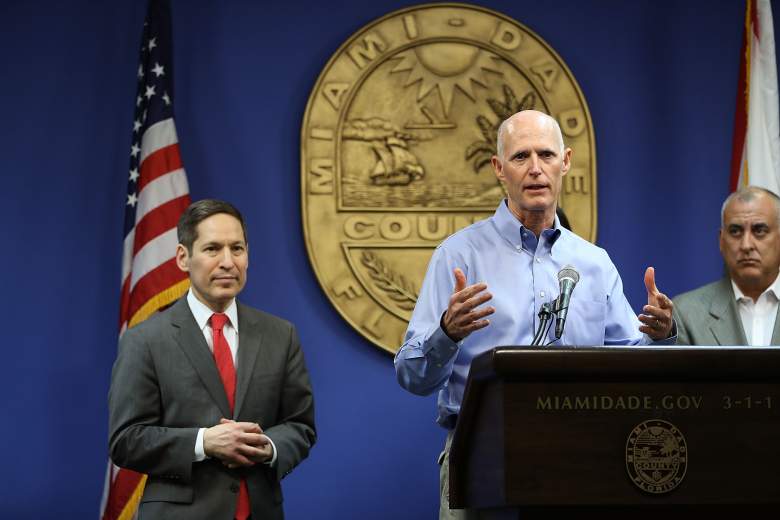 Director of the CDC, Dr. Tom Frieden, (L) listens as Florida Governor Rick Scott speaks to the media about the outbreak of the Zika virus during a visit to Miami-Dade County Emergency Management center on August 4, 2016 in Doral, Florida. (Getty)

The Hill says that the Miami Beach transmissions all occurred within a 1.5 mile area. According to The Hill, Congress is squabbling over freeing up additional funds to fight the Zika virus’ spread in the U.S.

The White House has requested $1.9 billion in new funding, says The Hill.

WFTV says the virus occurred “in the area of Miami Beach between 8th and 28th streets.”

The virus “circulates in blood, semen and can also be found in saliva and urine,” says NBC.

5. Florida Health Officials Previously Denied Zika Was Spreading & The Impact on The Tourism Industry Is a Concern 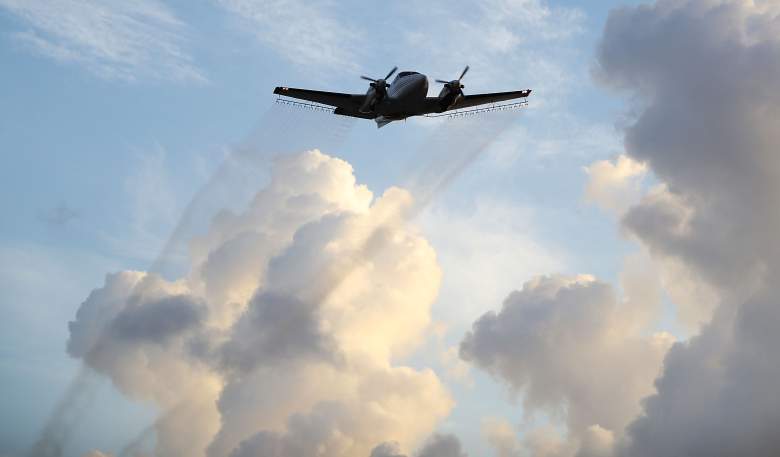 A plane sprays pesticide over the Wynwood neighborhood in the hope of controlling and reducing the number of mosquitos, some of which may be capable of spreading the Zika virus on August 6, 2016 in Miami, Florida. (Getty)

NBC News says that Miami Beach’s tourism industry could be affected by the news.

The new infection zone is located in the heart of Miami’s tourist center, The Washington Post said.

Just one day before the new announcement, Florida health officials had denied that the virus had spread in Miami, says NBC. 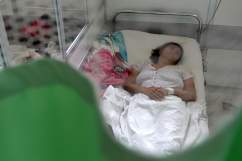