#NYPD: Meat-cleaver suspect Akram Joudeh was trying to remove boot from his car when officers confronted him #nbc4ny pic.twitter.com/atX7fMPohI

The suspect in a meat cleaver attack on a New York police detective was identified as Akram Joudeh, a man with repeated past arrests who was reportedly living out of his car.

NBC4 said Joudeh was shot 18 times by police after injuring an off-duty detective with the cleaver after he discovered a boot on his white Nissan Altima and allegedly flew into a rage when officers approached him.

The attack occurred in the heart of New York City near Penn Station around rush hour on September 15. Police then chased and shot the attacker, who was injured. Gunfire erupting so close to a major New York City landmark and commuter area caused chaos as people took cell phone videos from office windows and hotels and reacted in panic.

The officer, identified as Brian O’Donnell, an off-duty detective, is expected to live, although he was seriously injured with a slash to the face; the suspect was in stable but critical condition.

1. Joudeh Has 15 Previous Arrests Including for Carrying Knives Near a Synagogue, Reports Say

NBC 10.com said the suspect was 32-years-old and has 15 prior arrests, “including one on Aug. 27 after he was found carrying knives near a synagogue.”

NYPD released a photo of the meat cleaver Joudeh allegedly used on September 15. 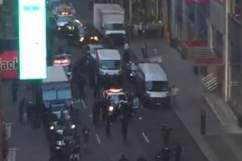 2. The Suspect Was Upset Because His Car Got a Boot & Was Living in His Car, Reports Said

The New York Post said the suspect’s car was booted, which upset him. A sergeant tasered the man, a struggle unfolded, and an off-duty detective intervened and was struck with the meat cleaver, said The Post.

NBC 4 New York said that, after allegedly pulling the cleaver from his waistband, Joudeh ran toward Sixth Avenue with officers giving chase. “One uniformed sergeant deployed a stun gun to no effect,” said NBC4, and then mounted “the front grill of a marked NYPD car.”

One officer was grazed by a bullet, and the other suffered a head laceration as the suspect wielded an 11-inch meat cleaver. The attack happened the day before police Commissioner Bill Bratton is set to retire.

I commend our officers for their bravery tonight in the incident near Penn Station. Keep them in your thoughts as they recover.

In an official statement posted to Twitter, the New York Police Department wrote, “Upon arriving at the scene the officers encountered a male who removed a 11-inch meat clever (sic) from his waistband & fled west bound. The @NYPDMTS officers pursued the male and put his description over the radio. A responding uniformed sergeant deployed a taser to no effect.”

At that point, says NYPD, “The suspect continued to flee w/b on W.32 Street towards 7 Ave. Mid-block the suspect jumped on top of the front of a marked police vehicle. At this point an off-duty NYPD Detective in civilian clothes attempted to subdue the suspect.”

That’s when the suspect allegedly struck the officer, said NYPD.

The detective was released from the hospital in a scene captured on video:

Glad to see Det. O'Donnell is on his way home to continue his recovery we are so proud of his heroism @Bogs4NY pic.twitter.com/lR2Fhjr0p5

The NYPD said Joudeh was living in his car.

According to The New York Daily News, people reported seeing “a man with a scruffy beard and wearing sandals running with a meat cleaver in his hand,” which led to police being called to the scene in the first place. 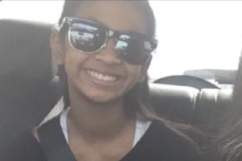 Fox Exclusive video obtained of man with butcher knife being shot by nypd in front of Manhattan mall. @FoxNews pic.twitter.com/Tdh2RRZ12I

Photos and videos captured the chaos at the scene as people recorded the police response from the street, hotel rooms, and office buildings. Some also captured more grisly aspects of the scene.

The attack occurred near Penn Station and Madison Square Garden at one of the busiest times – rush hour. Photos showed a massive police response, including helicopters whirring overhead as commuters tried to figure out what was going on and people responded in panic to the gunfire. 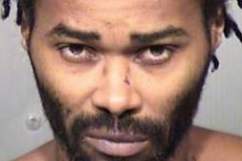 4. Officers Shot the Suspect After One Officer Was Slashed in the Head

CBS New York said the suspect allegedly slashed the officer in the head with the meat cleaver.

Officers then shot the suspect. The New York Daily News said Joudeh allegedly “refused to drop the large knife and lunged at cops.”

NBC New York said Joudeh struck at least one officer in the face with the cleaver and “four other officers were taken to the hospital to be evaluated for trauma.”

The New York Police Department said the injured officer suffered a six-inch wound to the face.

NYPD added, “The suspect struck the detective in the head causing an approximate 6-inch wound. Responding uniformed officers then fired at the suspect striking him several times.”

NYPD said the suspect was in critical condition, and the officer was in serious condition.

5. The Suspect Is Previously From Queens, Reports Say

New York media reported through sources that the suspect is from Queens.

Two years ago, another man struck a rookie New York police officer in the head with an axe; the officer survived but the suspect was shot to death, said NBC New York.

There was no indication that the attack was terrorism related, but news of it was starting to spread on ISIS-related social media channels online:

News of stabbing in New York is spreading on IS-linked Telegram channels pic.twitter.com/LvYCr9H74A