The “sex tape” that Donald Trump wants people to “check out” actually occurred live on TV in Spain during a reality show that Alicia Machado was participating in. In a Twitter storm on the morning of September 30, the GOP presidential candidate told his followers to “check out sex tape and past” of the former Miss Universe whom he infamously called Miss Piggy. Trump also pondered as to whether Democratic candidate Hillary Clinton helped Machado become a U.S. citizen so she could use the beauty queen in Monday’s debate.

1. Machado Finished in 8th Place in the Reality Series Known as ‘The Farm’

Amid her fame, Machado competed in the Spanish reality show La Granja (The Farm). The show lasted for two seasons from 2004 until 2005. Machado was appearing in the second season where she finished in eighth place. The show format saw celebrities being forced to live together on a farm, performing regular farm chores. Each week, a celeb is voted off the show by the public.

In the above clip you’ll see Machado getting up close and personal with Spanish actor, Fernando Acaso. All the while, Machado’s mother, Martha Fajardo, is asked to comment from a television studio. Meanwhile, in the same room, María Jesús Ruiz, 2004’s Miss Spain, is also having a sex in the same room as Machado.

2. Her Relationship With a Mets Outfielder Apparently Ended Because of the Incident

At the time Machado entered the show, she was dating then-Philadelphia Phillies outfielder Bobby Abreu.

People Magazine reported that following her tryst on Spanish television the couple’s relationship ended. Although Abreu maintained they had broken up before Machado appeared on the show, she still apologized publicly to him after leaving the program.

3. Machado’s Sex Partner Was the Son of the Voice of the Dog on ‘Fraggle Rock’

Machado’s partner in the reality TV romp was Fernando Acaso, a Spanish racing driver and actor. According to his IMDb page, he’s the son of writer Felix Acaso. On Felix Acaso’s IMDb page, it says that he was the voice of Sprokett the Dog on the 1980s children’s show Fraggle Rock.

4. Machado Has Been Accused of Being an Accomplice in the Attempted Murder of a Judge

Since Hillary Clinton brought Donald Trump’s treatment of Alicia Machado up in the September 26 presidential debate, she has been the subject of a media firestorm. Clinton accused Trump of fat-shaming Machado after she gained some weight following her 1996 Miss Universe win. Most shockingly, it’s been brought up that Machado was implicated in the attempted murder of a Venezuelan judge. When asked about this on 360 With Anderson Cooper, Machado replied that she wasn’t a “saint.” A report by The Economist from 1998 on the incident referred to it as a “real-life soap opera.”

5. The Latest Accusations Against Machado Came as Part of a 3 a.m. Twitter Rant From Trump

Trump wrote about Machado, “Using Alicia M in the debate as a paragon of virtue just shows that Crooked Hillary suffers from BAD JUDGEMENT! Hillary was set up by a con.” He also wrote, “Wow, Crooked Hillary was duped and used by my worst Miss U. Hillary floated her as an ‘angel’ without checking her past, which is terrible!” 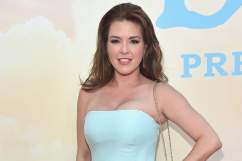