The charges were dropped in May 2017, according to the Daily News.

“The state filed a motion to dismiss in light of evidentiary issues that have recently arisen in the case,” Utah prosecutors told the newspaper. “Based on those evidentiary issues, the State does not believe that there is a reasonable likelihood of conviction if the case were to proceed to trial.”

1. Hardcastle & Taylor Say They Are the ‘True Victims’ of ‘Lies & Fabrications’

After the charges against Anne Hardcastle and Michael Taylor were dropped in May 2017, the couple said in a statement to the New York Daily News that they are the “true victims” of “lies and fabrications.”

They attacked authorities for bringing the case, saying it is a “nightmare concocted by an individual and the representatives of the State of Utah and Summit County.”

They continued, “”Sadly this is a nightmare that should never have happened if both law enforcement and the judicial process had properly assessed the facts and acted in a manner consistent with the truth. … false accusations like these hurt legitimate victims which deeply saddens us and further emboldens us to expose the injustice we’ve endured.”

Authorities have not detailed what led to the charges being dropped.

“I cannot discuss the evidentiary issues that lead us to determine that we would not prevail at trial, however, there was not a hearing or other determination where the charges were proved false,” said Chief Prosecutor Patricia Cassell said in a statement.

Tara Isaacson, Hardcastle’s attorney, told the Salt Lake Tribune new evidence showed “both of the defendants were innocent and this was consensual.”

Kenneth Brown, who was representing Taylor, said they were happy the case was dropped and told the Tribune he appreciated prosecutors took a closer look at the case before taking it to a jury.

“From our perspective, the case was always one where the sexual activity was consensual,” Brown said. “That’s always been the defense.”

2. The Victim Says She Was Given Ecstasy & Was Left With Bruises, Scratch & Bite Marks on Her Body

The victim told police she met Anne Hardcastle and Mike Taylor on January 25 while they were at a Park City bar during the Sundance Film Festival, according to court documents obtained by the New York Daily News.

The victim told police she tried to escape and sent two text messages to friends saying she might need a ride home, but then blacked out, according to the Daily News.

She went to the Park City Medical Center the next day, where an examination found scratch marks on her upper body, suction marks on her neck, bruises and bite marks on her arm, a bitten lower lip and acute vaginal pain, the warrant obtained by the Daily News said.

The victim told police that on the same day she went to the hospital, Anne Hardcastle sent her a friend request on Instagram and began communicating with her there, the Salt Lake Tribune reports.

The conversation between Hardcastle and the victim over the next few months gave police the incriminating evidence they needed to make an arrest, according to the Tribune.

“You said you liked it rough and so I gave you what you wanted,” Hardcastle told the victim in one message, according to court documents obtained by the Tribune.

Police said in the arrest warrant that Hardcastle admitted to molesting and performing oral sex on the victim and licking her breasts, according to the New York Post. Hardcastle also said Taylor fondled the victim’s breasts and touched her, according to police.

The couple were arrested following a night of partying, the Post reported.

Hardcastle “stood quietly” with a “stunned expression on her face,” the source told the Post, while Taylor, “began babbling about his love for law enforcement, claiming that he gives donations to police organizations.”

3. Hardcastle’s Dad Said She ‘Wouldn’t Hurt Anyone’ & ‘Couldn’t Have Been Happier’ After Returning From Utah, One of Many Trips She’s Taken With Taylor

Anne Hardcastle in an Instagram photo taken during the Park City trip, which was caption, “My middle name’s Danger.”

“The last thing she would do is engage in this sort of activity. She’s not that sort of person at all. She wouldn’t hurt anyone,” Hardcastle told the newspaper.

He also said she “couldn’t have been happier about that trip to Utah. There was no mention of any incident.”

Ed Hardcastle said his daughter had taken many trips with Taylor.
Anne Hardcastle’s Instagram page, @softshack, shows photos of a hard-partying Hardcastle in many exotic locals. She most recently took a trip to Las Salinas Beach in California, two weeks ago, and also posted photos from trips to Ibiza, Rome, Barcelona, Key West and Miami.

Hardcastle is originally from Maryland. She last worked as an executive assistant at an investment firm, and has also worked in marketing, according to her Linkedin profile.

She graduated from the College of Charleston with a degree in communication and media studies.

Her attorney, Tara Isaacson, told KUCW-TV the accusations devastated Hardcastle and have ruined her reputation.

“She lost her employment,” Isaacson told the news station. “She was jailed in Rikers Island for several weeks (while waiting extradition).”

4. Taylor Played in Minor League Hockey for 7 Seasons Before Starting a Career in Finance

Mike Taylor played college hockey at Northeastern University and then professionally for seven years for several minor league teams, according to HockeyDB.com.

Taylor, originally from Canada, retired from hockey in 2001 after playing for the San Diego Gulls in the West Coast Hockey League, according to a San Diego Union Tribune article. He led the team in scoring that final season, but decided to quit hockey to go to business school at Duke University, citing lingering back injuries.

“Growing up with hockey, it’s something I love to do, and no matter what age I give it up, I’m going to have second thoughts,” Taylor told the Union Tribune at the time. “I just know it’s in my best interests for my future and physical condition. I have degenerative arthritis, plus a couple bulging disks and basically I can’t do certain things for any length of time.”

According to his Linkedin page, Taylor began a career in finance after attending Duke. He worked as a trader at Lehman Brothers, before becoming a vice president at Aqueduct Capital and a principal at Greenhill & Co. He joined First Avenue Partners LLP as a principal, focusing on alternative assets capital raising, in January 2015.

His bio page was removed from the First Avenue Partners’ website.

Taylor, like Hardcastle, lost his job and had his reputation destroyed, his attorney, Mike Brown, told KUCW-TV.

“It’s a long row for him,” Brown said. “He lost his job for these allegations which were false. Usually the headline isn’t as big when this happens. Lots of coverage when its filed, but when allegations are not true, it doesn’t get much attention.”

Mike Taylor and Anne Hardcastle were held without bail in New York before being extradited to Utah to face the sexual assault charges there, the New York Daily News reports.

Deputy Summit County Attorney Joy Natale told The Salt Lake Tribune that Taylor and Hardcastle waived extradition hearings and they were transferred to Utah, where they were later released on bail. Preliminary hearings were held earlier this year.

Hardcastle was facing charges of object rape and forcible sodomy. Taylor was also charged with object rape, and is also accused of forcible sexual abuse. 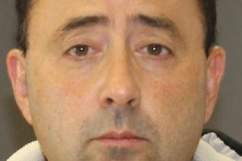