Crutcher, an unarmed man, was shot and killed by Shelby after she encountered him with his vehicle, which had broken down in the roadway.

“Officer Shelby reacted unreasonably by escalating the situation from a confrontation with Mr. Crutcher, who was not responding to verbal commands and was walking away from her with his hands held up, becoming emotionally involved to the point that she overreacted,” said the affidavit released with the charges by the District Attorney’s office. “Although Mr. Crutcher was wearing baggy clothes, Officer Shelby was not able to see any weapons or bulges indicating and (sic) weapon was present.”

The case generated outrage – shortly before the Charlotte riots over another police-shooting death – after police released videos from a squad dashcam and a helicopter that was flying overhead. The videos show Crutcher with his arms up at one point, although the actual seconds before the shooting are obscured on the video. Another officer with Shelby deployed a taser against Crutcher instead, but Shelby shot and killed Crutcher at close range.

You can read the criminal complaint charging Shelby here. It was released by the Tulsa County DA’s office on September 22:

Read the affidavit in the case here:

Kunzweiler also said that Shelby “emotionally involved to the point that she overreacted,” according to NBC.

According to the affidavit by the District Attorney’s chief investigator, Crutcher “was walking towards her and she went to him and asked him if the vehicle belonged to him and if it was disabled. He was mumbling to himself and would not answer any of Officer Shelby’s questions. Mr. Crutcher kept putting his hands in his pockets and Officer Shelby kept telling him to show his hands. At that point, Mr. Crutcher began walking towards the abandoned vehicle with his hands held up and was not responding to any of Officer Shelby’s commands to stop. She has pulled her duty weapon in the ready position and follows him to the vehicle.”

Crutcher fell to the ground.

The dashcam video shows “Officer Shelby, with her duty weapon pointed at Mr. Crutcher” and Crutcher “walking towards the abandoned vehicle with both of his hands in the air,” said the affidavit.

The helicopter video “shows Mr. Crutcher at the driver’s side front door of the vehicle with his right hand in the air and his left hand unobservable. At that time Mr. Crutcher was shot by Officer Shelby.” The officers found no weapons on or near Crutcher, says the affidavit.

Officer Shelby “made statements that she was in fear of her life and thought that Mr. Crutcher was going to kill her. When she began following Mr. Crutcher to the vehicle with her duty weapon drawn, she was yelling for him to stop and get on his knees repeatedly,” the affidavit says.

Shelby’s husband, Dave Shelby, who is also a police officer, was riding in that helicopter. However, news reports say he wasn’t the officer in the helicopter who is heard on the released audio calling Crutcher a “bad dude,” a comment that also generated outrage in the community and from Crutcher’s family.

The charges come as the country is already on high alert after riots in Charlotte Tuesday and Wednesday injured at least 20 police officers and resulted in a demonstrator being shot and killed, the city of Charlotte says, by another demonstrator. Those riots were sparked by the shooting death of another African-American man, Keith Lamont Scott, by police, in this case police in Charlotte.

However, in contrast to the death of Crutcher, who police say was unarmed, police in Charlotte have said that Scott was armed with a gun, which his family disputes.

Read more about the charges against Shelby here: 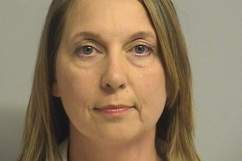