Bill Nojay at his swearing in with his wife, children, and father. (New York State Assembly)

Bill Nojay killed himself on the morning of September 9 near a burial plot at Riverside Cemetery, according to Rochester police, WHAM-TV said.

Even after his death, Nojay won the majority of votes in his primary election.

Nojay was supposed to appear in court later in the day on fraud charges, according to The New York Daily News.

WHAM-TV says that police went to the cemetery to check on Nojay’s welfare and, when they got there, they witnessed his suicide.

Police did not reveal who had called them. Nojay shot himself to death, said The New York Daily News.

The Democrat Chronicle said Nojay killed himself next to family graves. The newspaper said Nojay, 59, “took his life under a large maple tree shadowing the grave of his brother… who died in 1999, and the headstones of his parents, Norman and Katherine.”

In 2013, he wrote on Facebook, “I have been a strong advocate for the disability community all my life along with my parents Norm and Kay Nojay. It was my brother whose life-long battle and his courage that inspired all of us.”

2. Nojay Was Accused in a Fraud Scheme Involving a Dentist From Cambodia

So sad to hear about Bill Nojay Condolences to family & friends I recall him vibrant & passionate as when in Norwich pic.twitter.com/MhaLjMS2cH

According to The New York Daily News, Nojay was supposed to turn himself in to the FBI on Friday morning and appear in court on fraud charges after a Cambodian dentist claimed he and others “got her to invest $1 million in a rice exporting company that never opened.”

Instead, he told his lawyer he was killing himself, the newspaper said.

WHEC said that the criminal case against Nojay was sealed so it’s not known for sure whether it related to the Cambodian controversy. WHEC said Nojay referred to the Cambodian situation recently on the radio, saying, “I’ve had an ongoing involvement with Cambodia for the past 30 years. I have a lot of friends there, involved with a couple of activities currently there — including one business and there’s a dispute, primarily between Cambodians.”

According to WHEC, “Nojay and two business partners were indicted there for allegedly defrauding a dentist out of a million dollars.”

3. Nojay Was Married With Three Children

According to Nojay’s legislative website, he was married to Debra and had three children, Kiva Gordon, Matthew Nojay, and Elizabeth Nojay.

They joined him for his most recent swearing-in ceremony.

You can read Nojay’s obituary here. 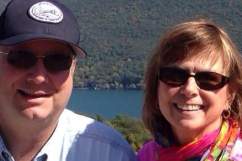 Nojay’s official biography says he was “a small-business owner, business attorney working with small- to mid-sized companies in Upstate New York, and the host of a daily radio show which runs on several stations around Upstate New York.”

The bio adds that “Bill co-authored a book used by industry finance executives on New York sales and use taxation of manufacturers. He works extensively in the agriculture industry with dairy and grain farmers, distributors and transporters.”

He was elected to the 133rd Assembly District as a Republican in 2012. His district includes all of Livingston County, the towns of Pittsford, Mendon, Wheatland and Rush in Monroe County as well as the towns of Prattsburgh, Cohocton, Wayland, Dansville, Hornellsville and the City of Hornell in Steuben County, his legislative website says.

Rick Milne, who was running against Nojay in a primary, announced he was suspending his campaign after Nojay’s death.

The New York Times said Nojay was one of the Donald Trump’s earliest supporters in the state.

The primary election continued and, even though he had already died, Nojay won it, said The Democrat and Chronicle.

According to the newspaper, Nojay won 58 percent of the primary vote posthumously.