The husband of Tulsa, Oklahoma Police Officer Betty Shelby is an Iraq war veteran who is also a police officer. Dave Shelby was in the helicopter overhead when Shelby shot and killed Terence Crutcher.

The shooting of the unarmed black man has sparked outrage online and pleas for charges by Crutcher’s family. On September 22, the Tulsa District Attorney charged Betty Shelby with criminal manslaughter in Crutcher’s death. You can read those charging documents here.

Tulsa police released video from a police squad car and the helicopter of the scene on September 19. Police had encountered Crutcher after his SUV broke down on the roadway.

According to the New York Times, the videos show “Crutcher raising his hands, walking toward a car and leaning against it.” He was then tasered by Officer Tyler Turnbough and fatally shot by Betty Shelby, “though the view from both cameras is obstructed in the moments before those actions,” said The Times.

1. Dave Shelby Was Not the Officer Who Called Crutcher a ‘Bad Dude’

This was Crutcher’s profile picture on Facebook. (Facebook/Terence Crutcher)

Audio from the helicopter, released by police, captured an officer in the overhead helicopter referring to Crutcher, 40, as a “bad dude.” This comment has drawn outrage online and from Crutcher’s family.

The Tulsa World newspaper says that Shelby’s husband, Dave Shelby was in the helicopter at the time of the shooting “by happenstance.”

Dave Shelby did not make the bad dude comment, but the officer who did has not been identified, according to a Tulsa World reporter.

The police chief, Chuck Jordan, called the video “disturbing,” according to NBC News.

2. Dave Shelby Served in the Iraq War & Was Piloting the Helicopter When Crutcher Was Shot

Tulsa Police confirmed that Dave Shelby, Betty Shelby’s husband, was the pilot in the helicopter that was hovering over the shooting scene at the time, said KJRH.

In the past, Dave Shelby has been involved in pursuits in the Tulsa police helicopter. He received a medal of valor for his work on a kidnapping case. You can see photos of Dave Shelby here.

“Every day, officers put their lives on the line and most of the time, there’s no recognition and we don’t do it for that reason. We do it because that’s our job and that’s what we’ve sworn to do,” he told News on 6 in 2012.

A 2014 article in the Tulsa World newspaper said that Dave Shelby was “a Tulsa police officer and an Army reservist who volunteered for duty in the Iraq war.” That year, he was overseas, so his wife led a Pledge of Allegiance at a Pro-America rally. She told the newspaper at that time, “I knew there was always a possibility he was going to be deployed sometime. He knows this is his duty and he’s proud to serve his country.”

Dave Shelby’s LinkedIn profile identifies him as a lieutenant colonel in the U.S. Army. He has a master’s degree from the University of Phoenix. He has been involved in a variety of cases over the years, including an alleged elder abuse case.

At one point an officer in the helicopter says: “Mike I’m gonna [sic] hit the record it. This guy is still walking.” At another point someone in the chopper says, “Not for Taser, I think.”

A few seconds later, the unidentified officer in the helicopter says, “Also, got a feeling it’s about to happen. It looks like a bad dude, too. Might be on something.”

You can read the full transcript of the helicopter conversations here. 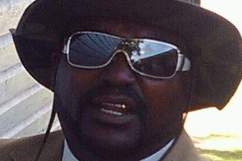 But attorneys for Crutcher’s family enlarged police footage “that appeared to show that Crutcher’s window was up at the time of the shooting,” according to ABC, which added that Betty Shelby had a stun gun but did not use it, fatally shooting Crutcher instead.

Betty Shelby thought Crutcher had a weapon and was not complying with orders, her attorney told The New York Times.

Betty Shelby is a former sheriff’s deputy and member of the Ohio National Guard, according to Tulsa World.

5. Crutcher’s Family Has Spoken Out on His Behalf, Criticizing the ‘Bad Dude’ Comment

Crutcher’s twin sister, Tiffany, led a family news conference in which she called for charges against Betty Shelby. 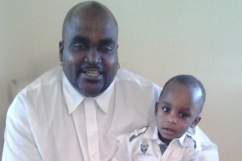