Trump was accompanied by former New York Mayor Rudy Giuliani. Hillary Clinton was also at ground zero for the annual moment of silence, but she left early at 9:30 a.m. because she wasn’t feeling well and felt overheated but later felt better, said CNN.

Initially, neither candidate was expected at the memorial, said Fox News.

Trump is obviously linked integrally to New York; he was born there and made his fortune there. He has a history of comments and controversies relating to September 11. 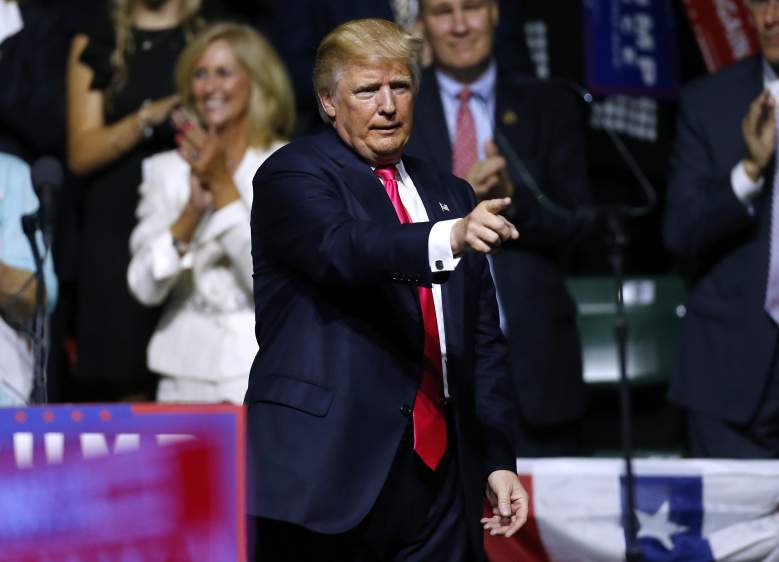 U.S. Rep. Joseph Crowley, D-N.Y. highlighted the money when he previously criticized Trump for receiving it, saying Trump had “cashed in” on the attacks by “collecting $150,000 in federal funds intended to help small businesses recover — even though days after the attack Trump said his properties were not affected,” said Politifact, which researched the issue.

2. When the Attacks Occurred, Trump Vowed That New York Would Rebuild & Wanted to Reconstruct the Towers

The Twin Towers on September 11. (Getty)

NBC News has compiled quotes of what Donald Trump has said about September 11 at the time of the attacks as well as now. “Speaking near the rubble days after the towers fell, the real estate developer and lifelong New Yorker took a measured tone, vowing to rebuild and restore the city,” said NBC.

Watch Trump being interviewed on September 11, 2001:

Trump supported a plan to rebuild the towers the way they were before but larger and stronger, said NBC. Trump gave a live telephone interview on September 11 with local media, says Politico, describing him as speaking “cogently and even poignantly about New York’s changed skyline and the need to never forget” and adding that Trump was in Trump Tower on 5th Avenue when the planes struck, watching out the window and following the news.

He was asked in that interview about running for president in the future, and he talked about how one of his buildings was now the tallest in downtown Manhattan, said Politico.

Trump has passionately defended New York on the campaign trail. When Sen. Ted Cruz trashed “New York values” in a debate, Trump responded by mentioning 9/11, “It was with us for months, the smell,” Trump said. “And everybody in the world loved New York, loved New Yorkers — and I have to tell you, that was a very insulting statement,” said CNN.

In 2013, before he was running for president, Trump took on a different tone, though, when he made what is referred to as his controversial “haters and losers” tweet:

“@realDonaldTrump: I would like to extend my best wishes to all, even the haters and losers, on this special date, September 11th.”

The Tweet was deleted in 2015, said Politico, but a manual retweet of it remained on the site (above). When Politico asked for an explanation, Trump’s spokeswoman said the tweet was from a few years ago.

Mother Jones says Trump also once claimed at a rally that he saw people jumping from the World Trade Center even though his office was miles away.

4. Trump Caused Controversy by Saying Thousands of Muslims Were Cheering the Terrorist Attacks

Members of the New York Fire and Police Department salute as a symbolic stretcher draped with an American flag is walked up a ramp and loaded into an ambulance May 30, 2002 at the World Trade Center site in New York City. (Getty)

Mother Jones reported that Trump said “thousands and thousands” of Muslims in Jersey City had cheered the destruction of the Twin Towers. This comment also caused much controversy and media exploration.

Mother Jones says “The claim was actually a conspiracy theory that had no evidence or reports to back it up,” adding that newspapers that checked into the account “could find only isolated, unverified reports that small celebrations might have taken place.”

An investigation by NJ.com into Trump’s claim is headlined, “Some Jersey City Muslims did celebrate 9/11, cop and residents say.”

The newspaper did not find evidence to back up the claim of “thousands,” but did find witnesses who “say they witnessed small pockets of people celebrating before the groups dispersed or were broken up by authorities.”

5. Trump Says He Would Have Taken out Bin Laden Before 9/11 & Has Blamed George W. Bush & Bill Clinton

US President George W. Bush holds an American flag during a Memorial Service at the Pentagon October 11, 2001 in Arlington, Virginia. (Getty)

Trump raised the ire of Jeb Bush during the Republican presidential primary, when he said, “The World Trade Center came down during your brother’s reign. Remember that,” during a debate, said AOL News.

Trump also said that, if he were president, he would have taken out Osama bin Laden, the attack mastermind, before the terrorist attacks, says The Columbus Dispatch.

Speaking on September 9, Trump said, “I would have been tougher on terrorism. Bin Laden would have been caught a long time ago before he was ultimately caught, prior to the downing of the World Trade Center,” the Columbus Dispatch said.

Trump’s new deputy campaign manager David Bossie has authored a book blaming Bill Clinton for the attacks. The Daily Beast says the book argues “that Bill Clinton’s hatred for the military and affinity for the homosexual agenda led to 9/11.”

Loading more stories
wpDiscuz
0
0
Would love your thoughts, please comment.x
()
x
| Reply
Donald Trump is expected to visit ground zero for the 15th anniversary of September 11, 2001. He has a history of 9/11 related comments and controversies.