Here’s what you need to know about the hero firefighter.

1. He Died In an Explosion of an Illegal Drug Lab

An explosion in the Kingsbridge area of the Bronx has resulted in the death of one of our bravest, and injured 12 others. pic.twitter.com/h3Yc1wqmeC

Fahy was on the scene investigating what was reported as a gas leak at a two-story home in the Kingsbrige neighborhood of the Bronx, near the northernmost tip of New York City, when the house blew up. While the cause of the blast is still under investigation, police say that when the firefighters arrived to check on the gas leak, what they actually found was an illegal drug operation in the home.

Fahy was reportedly struck on the head by a falling piece of the collapsing roof as he and other firefighters stood outside the home at 300 W. 234th Street, near the Tibbet Avenue corner. He was rushed to New York-Presbyterian/The Allen Hospital. But sadly, Fahy passed away there from his injuries.

2. He Was the Father of Three Children

According to a statement by the FDNY, Fahy was a 17-year veteran of the New York Fire Department. He was also the dad of three children, ages six, eight and 11. Fahy was 44 years old.

Fahy was a resident of Yonkers, a Westchester County city of about 200,000 just north of the Riverdale section of the Bronx, where the explosion that claimed Fahy’s life took place.

Fahy’s father had also been a batallion chief with 33 years in the fire department.

House explosion in the Bronx. pic.twitter.com/XHKyAcX5c1

According to a report by the New York online news site DNAInfo, the home contained a marijuana growing operation, with propane tanks on the premises, presumably to heat the indoor environment to allow the marijuana plants to grow.

Investigators are still trying to piece together what caused the explosion that killed Fahy, but they suspect that gas from the drug lab’s propane tanks may have been at the root of the tragedy, according to the DNAInfo report. The main gas supply to the home had been shut off for about 30 minutes when the house blew up.

Police say they had been investigating the house for about a week after getting a tip that it was home to a drug operation. They are now looking for the renters who occupied the residence, and may have run the illegal marijuana growing facility.

FDNY Firefighters remove the U.S. flag from the truck and bring it inside the hospital for FDNY Battalion Chief Michael J. Fahy. pic.twitter.com/aXFOViAX89

Described as a “rising star in the department, Fahy had worked his way rapidly up the career ladder in the New York Fire Department, according to the FDNY statement on his death.

“Chief Fahy made the Supreme Sacrifice while operating today at BOX 3732 in the Bronx. He was a 17-year veteran of the FDNY. Chief Fahy served as a Firefighter beginning in 1999, was promoted to Lieutenant in 2004, to Captain in 2007 and to Battalion Chief in 2012,” the statement said, while commending the chief for his “supreme sacrifice.”

“He was on the rise, he was a star, a great man,” New York Fire Commissioner Daniel Nigro said. The commissioner called Fahy’s death a “terrible loss not just for the Fahy family, but the fire department family.”

5. The Blast Injured As Many As 20 People

While Fahy was the only fatality from the marijuana grow house explosion, reports say as many as 20 people were hurt in the sudden blast, according to media reports.

The mayor gave the injury total at 12, in addition to Fahy.

In addition to police officers and nine other firefighters, the injured who required medical treatment included two workers for ConEd, the gas and power company that services New York City, and three civilians. 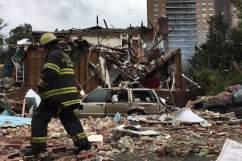