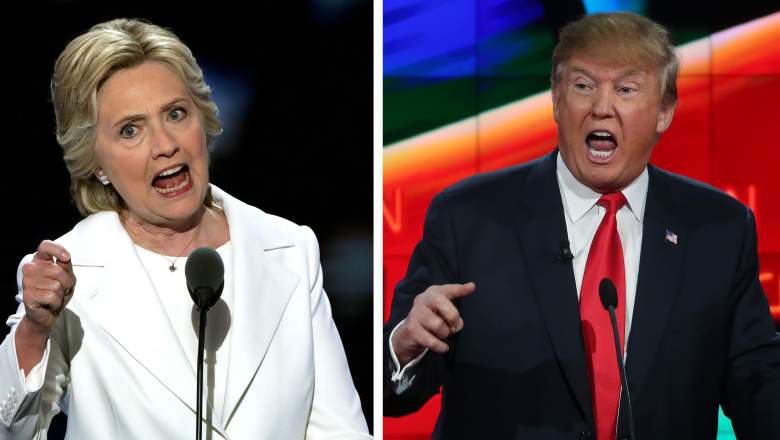 Hillary Clinton and Donald Trump are about to debate one another for the first time. (Getty)

The first 2016 presidential debate will be held on Monday, September 26th at 9:00 p.m. In it, the Republican and Democratic candidates will finally go head-to-head and face important questions about the future of the country. But who is it that selects these questions, exactly?

The presidential debates are hosted by the non-partisan Commission on Presidential Debates, which has sponsored the debates in every election cycle since 1988. But although the commission selects the format and locations of the debates, they have no role in what questions are posed to the candidates. Instead, that is completely up to the discretion of the debate moderator.

“The moderators alone select the questions to be asked, which are not known to the CPD or to the candidates,” the commission explains on its website. “They do not meet with the campaigns, nor do the campaigns have a role in moderator selection.”

This would mean that Lester Holt, who is a registered Republican, will prepare and ask the questions for Monday night. According to Deadline, he also selected the topics, which in this case are “America’s Direction,” “Achieving Prosperity” and “Securing America.” Holt being involved is a change from 2012, when NBC was left out of the debates because Mitt Romney’s campaign complained they would be treated unfairly due to the network’s relationship with MSNBC, according to The New York Times.

The second debate, though, will take on a town hall format, during which the average voter gets to question Hillary Clinton and Donald Trump. According to the CPD’s website, that town hall is to include questions that Facebook will receive from users and give to the moderators, which in that case with be ABC’s Martha Raddatz and CNN’s Anderson Cooper. It’s up to Raddatz and Cooper how they want to use these questions during the event.

Questions at the presidential debates are generally meant to address areas where the candidates differ the most or areas of controversy that may be of interest to voters, such as Hillary Clinton’s e-mail scandal or Donald Trump’s repeated praise of Russian president Vladimir Putin. Trump will also likely face at least one question about birtherism, something many feel he did not adequately address at his recent press conference. But because Trump has been ducking interviews with every network other than Fox News, he has not really had to confront the issue since then.

Because debate questions come from the anchors themselves, they’re usually the ones who receive criticism from both sides of the aisle when viewers feel a line of questioning is unfair. One recent example was in the October 2015 Republican primary debate on CNBC, which opened with Donald Trump being asked, “Is this a comic book version of a presidential campaign?”

Many of the questions were also seemingly posted with the goal of getting the candidates to attack one another. Texas Senator Ted Cruz received the biggest applause of the night when he went after the debate moderators for their behavior.

“The questions that have been asked so far in the debate illustrate why the American people don’t trust the media,” he said.

On the other side of the aisle, NBC’s Matt Lauer recently received criticism for giving Donald Trump what critics described as softball questions at a town hall, as well as for not interjecting and correcting Trump on certain falsehoods like the claim that he was against the war in Iraq from the beginning. This may create pressure on Lester Holt to come up with particularly tough questions and take on a more active role in the debate than Lauer did.

The second 2016 presidential debates will be held on October 9th and October 19th.

Read More
2016 Presidential Election, Donald Trump, Hillary Clinton, Politics
Follow Heavy ↓
Discuss on Facebook
Hillary Clinton and Donald Trump will go one-on-one in the first presidential debate this week. Who exactly comes up with the questions for these candidates?