Hillary Clinton returned to the campaign trail today for the first time since she passed out from pneumonia on September 11. Clinton spoke to a rally attended by hundreds of people in Greensboro, North Carolina. Her supporters were thrilled to see her and shared excited photos on Twitter and Facebook, happy to see that she was back. Meanwhile, protesters also attended to let their views be heard and Donald Trump supporters commented online that they weren't impressed with the turnout. Clinton addressed concerns about her health and also spoke against her main political rival, Donald Trump. During a press conference shortly after the rally, Clinton said that her senior staff knew about her illness. Click through the gallery to see photos from Clinton's return and read stories from both her supporters and her protesters. (Twitter/Nora Walsh-DeVries) 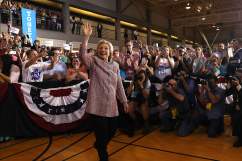