According to Rick Leventhal, Clinton made an “unexpected early departure.” As she was helped into a van, her “knees buckled” and she lost one of her shoes.

Leventhal also quoted a witness who said that Clinton was “clearly having some type of medical episode.”

Fox News said in a report on their website that a law enforcement source said that Clinton left because “she wasn’t feeling well.”

She unexpectedly left early because of what appeared to be a medical episode. I have a law enforcement source who was there, who was 15 feet away from Hillary Clinton. He said she was standing on a curb with her protective detail waiting for her motorcade.

They were surprised to see her because she wasn’t meant to be leaving yet… When it finally rolled up my source said she stumbled off the curb, appeared to faint, lost one of her shoes, which wound up underneath the van…

The protective detail helped her into the van and the van took off, presumably in the direction of the hospital.

ABC News’ Liz Kreutz said that the press pool who were at the event were not told where Clinton was going and that aides were not responding to questions. That report was reiterated by NBC News’ Monica Alba.

Secretary Clinton attended the September 11th Commemoration Ceremony for just an hour and thirty minutes this morning to pay her respects and greet some of the families of the fallen.

During the ceremony, she felt overheated so departed to go to her daughter’s apartment, and is feeling much better. 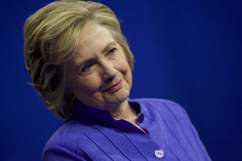 The Democratic presidential candidate’s health has become a focal point of the conservative media in recent months. The ammo comes largely from Clinton’s concussion and clot episode that she suffered in 2012. The New York Times reported at the time that the clot was located near Clinton’s brain.

While in July 2015, Politico, citing a report from Clinton’s physician, said that the candidate’s health was “excellent.” The dossier detailed her hypothyroidism, allergies and the fact that Clinton takes blood thinners to prevent clotting.

On September 8, the Drudge Report aggregated a report from The Association of American Physicians and Surgeons. That report said that 7 out of 10 doctors surveyed believed that Clinton’s health was an issue. It asserted that her issues “could be disqualifying for the position of President of the U.S.”

The executive director of the AAPS, Dr. Jane Orient, later told the Daily Mail that the group “has no position on what causes AIDS.” While the Mail also reports that the group’s lawyer was the son of late conservative activist Phyllis Schlafy. It adds that in 2005 he wrote an editorial on the AAPS website which said that there was a “link between abortion and breast cancer.”

Liberal news site Mother Jones has described the group as “Think Glenn Beck with an MD.”

Both presidential candidates from the two major parties were in attendance at Ground Zero. Neither was expected to make any comment while both had agreed to cease campaigning for a day out of respect.