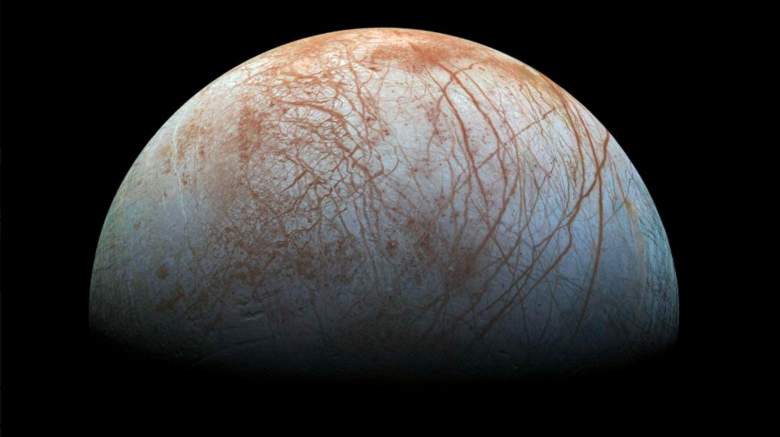 On Monday afternoon, NASA is making an announcement about “surprising” evidence from Jupiter’s moon, Europa. The evidence is related to the possibility of subsurface oceans on the planet. Does this mean there’s life on Europa?

NASA is making an announcement via livestream and a teleconference on Monday afternoon about images taken by Hubble of Jupiter’s icy moon, Europa. Hubble has spotted activity that may be related to a subsurface moon on Europa. NASA specifically noted in its announcement that they did not find alien life on Europa. However, further evidence of oceans on the planet might mean that life is possibly hiding there, somewhere.

Europa has long been one of the top contenders for finding some type of life in our solar system, outside of Earth. There’s strong evidence that a subsurface saltwater ocean is hiding beneath Europa’s icy surface. Water vapors seen in 2013 provided more evidence of this ocean. If the vapors are consistently present and observed again, then they could be studied to determine the chemical makeup of the ocean beneath the surface. Scientists could investigate if the ocean could support life, without having to drill into the ice to find out, NASA shared.

In May 2016, the Geophysical Research Letters released a study that looked at how much hydrogen and oxygen Europa could produce on its own, without volcanic activity, and found the ratio to be roughly the same as Earth’s. Earth’s oceans make hydrogen through serpentinization, when salt water flows into cracks in the Earth’s crust and interacts with minerals. The chemical reactions create heat and hydrogen in the ocean, The Washington Post reported. Cracks on Europa could facilitate the same process. In addition, Jupiter’s radiation could split up Europa’s ice molecules, cycling oxygen into the ocean and providing another valuable resource for life.

Neil Degrasse Tyson has said that Earth is in the habitable zone for life, based on its distance from the Sun, but Jupiter isn’t. However, Europa is kept warm by the gravitational stress from Jupiter, making it a possible habitable planet. Bill Nye said, after NASA’s announcement last week, that he wants NASA to explore Europa for the possibility of life.

Back in 2014, Space.com reported that Europa might offer the best possibility of harboring life. Its liquid ocean is shielded from radiation because it lies so far beneath the surface. And this subsurface ocean likely contains more water than Earth’s oceans. In addition, active volcanoes may exist beneath the surface, heating the water so bacteria can grow near vents like it does on Earth. So although intelligent alien life may not be super likely on Europa, there’s a good chance of at least finding bacterial life of some sort. And if NASA’s announcement pushes the evidence even farther in that direction, perhaps NASA will get the funding it needs to explore the question of life on Europa more thoroughly. NASA wants to send a robotic spacecraft to Europa to study the moon more closely in the 2020s. Currently called the Europa Clipper, the spacecraft would send a smaller companion craft, called The Bee, to fly through a fresh water plume and analyze its composition.

Read More
NASA, Space
Follow Heavy ↓
NASA's making a big announcement about Europa, one of the best possible sources of life in our solar system. Find out why Europa is so special here.