Joseph Michael Schreiber is accused of setting a Florida mosque on fire that was attended by Pulse night club shooter Omar Mateen, according to the St. Lucie County Sheriff’s Department.

The blaze occurred a half hour after September 11, the 15th anniversary of the terrorist attacks. The Washington Post said the attack also came “at the beginning of Eid al-Adha — the holiday of the sacrifice.”

In a statement on Facebook, the Sheriff’s Department said that Schreiber was arrested in the arson fire at the Islamic Center of Fort Pierce, Florida.

According to CNN, Mateen, who called 911 to pledge allegiance to ISIS, attended the mosque. Schreiber is from Port St. Lucie.

A Facebook page that appears to be Schreiber’s shared a Republican National Committee photo on Trump/Pence that bears the slogan “The team that will make America great again!” He wrote that he was single, is a student, lives in Florida, and was from New York. His Facebook page also contains Jewish symbology.

He also shared news of a Central Park explosion that was not deemed terrorism related, about Saudi Arabian links to 9/11, and an article headlined, “Only a demented fool believes Islam is not a problem.” Schreiber’s Facebook page also contains rhetoric against President Barack Obama and Hillary Clinton.

On July 12, a post on the page reads, “IF AMERICA truly wants peace and safety and pursuit of happiness they should consider all forms of ISLAM as radical ,the truth is that there is no such a thing as radical ISLAMIC extremism…ALL ISLAM IS RADICAL , and should be considered TERRORIST AND CRIMANALS and all hoo participate in such activity should be found guilty of WAR CRIM until law and order is restored in this beautiful free country , all who agree with this statement ,like it and make a comment.”

Major David Thompson, of the St. Lucie Sheriff’s Department said, “The Facebook posts were evident that there is anti-Islamic propaganda and that corroborates our fear that in fact this does have to do with hate for the Islamic community,” according to The Palm Beach Post.

The Sheriff’s Department said that “tips from members of the community, along with surveillance video from businesses and homes along Midway Road and Torino Parkway matched Schreiber along with an individual on a motorcycle at the times in question with the video surveillance obtained from the Islamic Center of Fort Pierce.”

Authorities say they then obtained a search warrant and searched Schreiber’s house, discovering that “Schreiber owns a motorcycle consistent with the surveillance video footage.” The Sheriff’s Department also alleged in its statement: “Other evidence collected also linked Schreiber to the arson.”

In a previous press release, the Sheriff’s Department said the fire broke out at 12:31 a.m. on September 11 at the Fort Pierce Islamic Center when “two callers driving by reported flames from the roof of the building.”

The fire was extinguished at approximately 5 a.m., said the news release. The Sheriff’s Department added, “Surveillance footage from cameras on the building revealed that a white or Hispanic male arrived on motorcycle at approximately 11:38 p.m. In the video, it appears he is carrying paper and a bottle of some type of liquid. The male approaches the north-east side of the building and a flash is seen, presumably when the fire ignited. The male is then seen running from the building.”

3. Schreiber Has a Criminal History & Qualifies as a ‘Habitual Felony Offender’

Schreiber “is known to law enforcement and as such qualifies as a prison release re-offender that would impose a 30 year minimum mandatory sentence,” said the statement from the Sheriff’s Department.

As a result, he could face very stiff penalties for the alleged arson, authorities said, writing: “He also qualifies as a habitual felony offender and could ultimately be sentence to life in prison.”

A reporter for CBS 12 said on Facebook that Schreiber has “a criminal past including charges of petty theft and grand theft.” 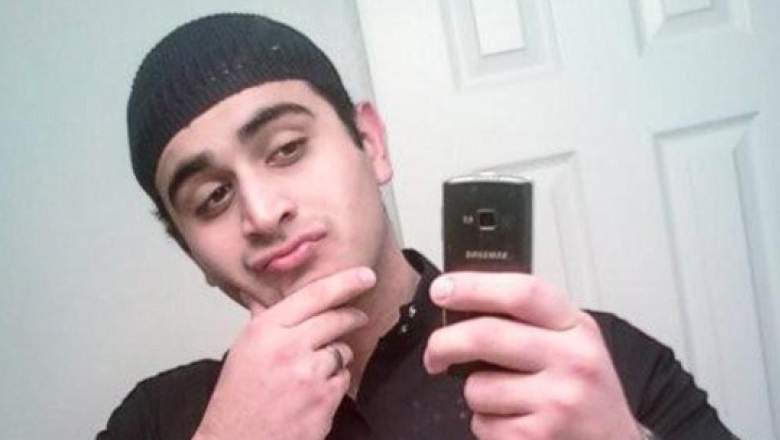 Omar Mateen was identified as the shooter of the Orlando nightclub mass shooting. (MySpace)

According to The New York Daily News, Rabbi Bruce Benson of the Temple Beth El Israel in Port St. Lucie “told reporters the alleged arsonist attended his synagogue for about a month last spring” but “didn’t leave a violent impression and only silently studied the Torah.”

According to WPTV, Benson said Joseph Schreiber’s father “walked into his temple for guidance” and Benson added, “This has come very much out of left field.”

5. The Mosque Received Other Threats After Mateen’s Massacre

After the mass shooting at Pulse, the mosque reported receiving threats and being visited by a motorcycle group, said the Sun-Sentinel. The threats included racial slurs, said the newspaper.

The newspaper added that members of the motorcycle group “circled the building yelling at congregants” in June.